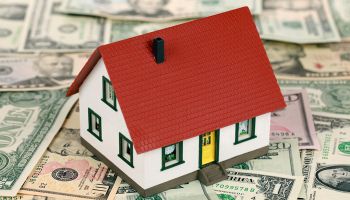 The success—or lack thereof—that U.S. banks and thrifts are now having with home equity loans and lines seems to depend on the strength of individual markets and company strategies.

Home equity loans and lines, representative of revolving, open-end lines of credit and closed end junior liens on one- to four-family residential properties, collectively dropped by 1.77% in the first quarter compared to the previous quarter and 7.71% compared to the year-ago quarter. 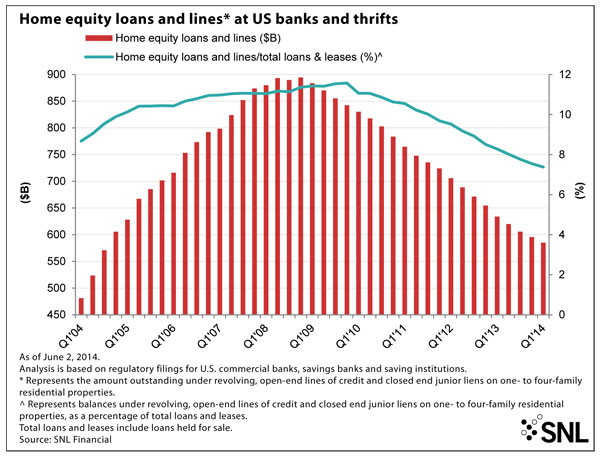 Donald Robinson, executive vice-president and COO at MVB Financial Corp., told SNL that home equity lending has been "very strong" during the past two years for the Fairmont, W.Va.-based company.

SNL data shows that quarter-over-quarter growth for MVB was 11.03%, and on a year-over-year basis it was 66.78%. Robinson said one of the factors behind those numbers is that the bank has a large mortgage operation.

"It's been a solid growth base for us," Robinson said. MVB saw its strongest two 2014 months in home equity lending in April and May, so it does not believe lending in that line will taper off any time soon. "In fact, I think we're starting to see people hustle to take advantage of the equity in their homes," Robinson said.

MVB is not alone with its positive outlook. Merion Capital Group analyst Jason O'Donnell told SNL his firm was recently working on a report in conjunction with the New Jersey Bankers Association looking at home equity line trends. Growth for that product has been negative in the Garden State for the past few years, but O'Donnell said it saw positive numbers in the first quarter.

"What I'm hoping is that this is part of a broader—albeit a very slow-moving — improvement in the health of the consumer," O’Donnell said.

Consumer lending has been moderately negative on a year-over-year basis for some time across most categories including home equity lines and credit cards, O'Donnell said.

"We're just now starting to see a turn, and part of it is the home equity improvement," said O’Donnell. "I think that's the signal that maybe there is a gradual pick-up going on in consumer lending, but it's so modest at this point that it's difficult to detect."

MVB's Robinson said MVB, which operates in north-central West Virginia and also northern Virginia, has seen appraised values holding stronger than they were a couple of years ago. He said the last few months in particular have not witnessed the issues with appraisals that were evident in 2009-2011.

"Hopefully, that's a sign of better things to come," he said. 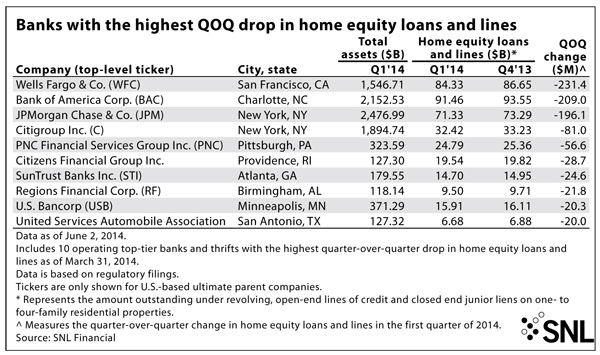 Where lending fell, where it rose

The largest quarter-over-quarter declines in home equity loans and lines were experienced at Wells Fargo & Co., which saw a $231.4 million drop, and Bank of America Corp., whose portfolio fell by $209.0 million, according to an SNL analysis.

Some banks are gearing up for a strong second half with their home equity offerings. Third Federal S&LA of Cleveland (MHC) recently said it was adding three states into its home equity mix.

"In the past three years, our expansion beyond our Ohio and Florida branch footprint has resulted in nearly $1 billion in closed home equity and first mortgage loans," Chairman and CEO Marc Stefanski said in a May 29 release. Also, Huntington Bancshares Inc. said in a May 14 release that it is expecting increasing activity this year in home equity lending as housing values continue to improve in Michigan and its other markets.

Robinson said the strong credit culture at MVB has led to a level of nonperforming loans that is typically below its peers across the board, and the company does not have significant delinquencies in home equity lending. But even more than the strong credits, those loans are attractive to the bank because they help build overall client relationships, he said. Customers tend to bank where they have their mortgages and home equity lines, which ultimately helps on the deposit side. The bank wants to use home equity lending as an even more significant deposit-gathering tool, he said. 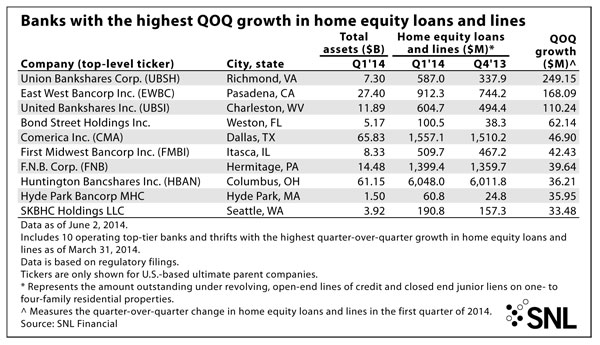 MVB's Robinson said home equity lending is very competitive and an area where MVB's competitors tend to run specials and loan sales. He said if it is not the most competitive product on the consumer side, then it is a close second. 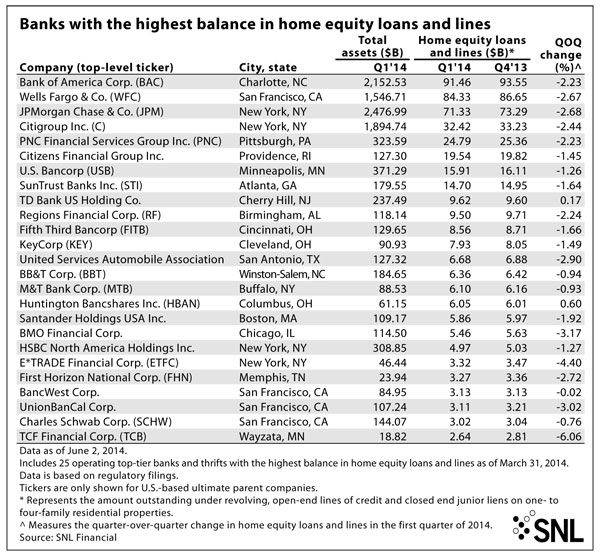 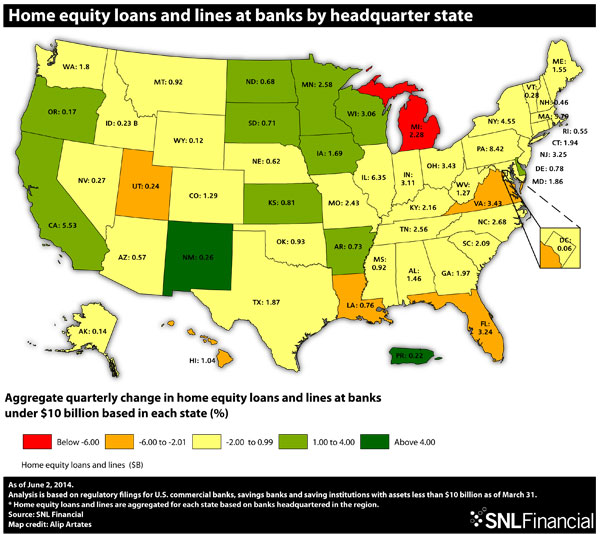