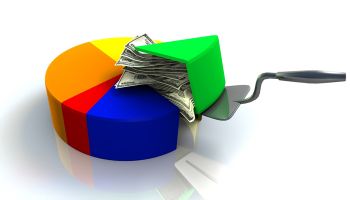 Loan loss reserves shrank yet again, overall, during the second quarter, but reserves for commercial loans increased, in what appears to be a trend.

With competition for commercial and investment loans heating up, the increase in reserves could represent a move deeper into the risk pool, though an increase in loan volume has accompanied the higher reserves. That means reserves for commercial loans as a portion of outstanding loans have been relatively flat.

Reserves rise, but loans do too

Reserves for real estate loans, which includes commercial and residential real estate as well as construction loans, have fallen dramatically over the past year, helping guide down aggregate reserves across loan types.

For the second quarter, reserves for real estate loans totaled $51.34 billion, down from $54.29 billion in the first quarter and $68.60 billion in the year-ago quarter. 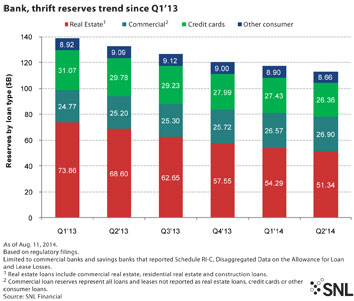 The decline in aggregate reserves across loan types while they rise for commercial loans fits a general theme of increased competition in the sector, said Steven Reider, president of Bancography, a bank consulting firm. Hot competition for loans has forced some banks to go a little riskier than they would have previously, he said.

That narrative also seems to apply to First Republic Bank, which saw a massive increase in its second-quarter loan loss provisioning.

The jump in loan loss provisioning attracted several questions during the company's July 16 conference call discussing second-quarter results. Management had said in prepared remarks that the bank would target a reserve allocation of 55 basis points to 60 basis points.

Ken Zerbe, an analyst with Morgan Stanley, asked whether the leap in provisioning was driven by more commercial and investment loans, which typically require higher reserve allocations.

"Ken, I think you're on the right direction," Michael Roffler, First Republic Bank deputy CFO, said in response, according to a transcript of the call.

"Obviously,” continued Roffler, “the business lending does come into the process at higher than the 55 basis points to 60 basis points, compared to the home loan, which is much less than that. So given the increase in utilization that occurred in business lines, and it did help increase the outstanding during the quarter, that led to higher provision levels given that little bit of change in mix that occurred compared to what you may have seen in prior periods." 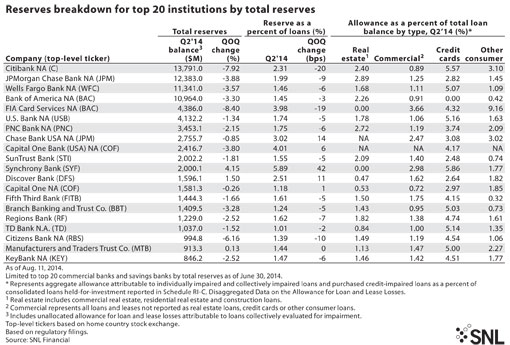