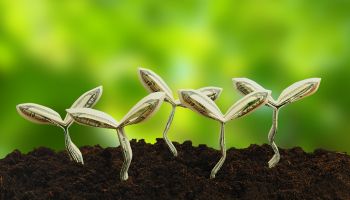 The nation's 50 largest commercial banks increased deposits at a greater rate than all U.S. banks in aggregate, but the largest banks also saw a greater reduction in their number of branches.

The FDIC released its annual Summary of Deposits on Sept. 29, showing deposits across the nation increased by 7.20% for the 12 months ended June 30. Meanwhile, the nation's top 50 commercial banks and savings institutions showed year-over-year deposit growth of 8.47%.

Some banks more known for capital market activity led the way in terms of year-over-year deposit growth. State Street Corp. posted the second-largest increase, as its deposits increased 72.96% over 12 months to $104.72 billion as of June 30. The move catapulted the bank to No. 14 on the top 50 list after coming in at No. 23 a year ago.

Almost across the board, banks are increasing their holdings of high-quality liquid assets in preparation of the liquidity coverage rule. But Christopher Marinac, managing principal for FIG Partners, said the low-interest rate environment was likely playing a more significant role than LCR.

"Investors have fewer alternatives. I think that there is a lot to be said for the fact that deposits are parked in the industry and that the amount of parking continued to evolve over the past year," Marinac told SNL. "As a result, we still have the overall issue of what's going to happen to the industry when rates rise because there will be more competition for funds."

And to the extent that investors are parking funds in the capital markets, Marinac said it would make sense for those increases to show up at a bank such as State Street.

State Street CFO Michael Bell said during the company's Sept. 9 presentation at the Barclays Global Financial Services Conference that the company was increasing its outlook for regulatory expenses. He called the supplementary leverage ratio, combined with the LCR, particularly onerous.

"We have to hold more high-quality liquid assets either in central bank deposits or in U.S. Treasuries. And at the same time, even though we view those as risk-free assets, they have to hold 6% capital. It's really that double-barreled impact that is most impactful," Bell said, according to a transcript of the event.

By percentage increase, Bank of China Ltd.'s U.S. deposits rose the most among big banks, catapulting the bank into the top 50 U.S. commercial banks by deposits after coming in at No. 74 in 2013. The bank increased its deposit base by 88.88% to $21.17 billion as of June 30. Rounding out the top five big banks in terms of deposit percentage gains were Deutsche Bank AG at No. 3 with a 68.53% increase, followed by a 53.38% increase at SVB Financial Group and a 45.25% jump at Morgan Stanley. 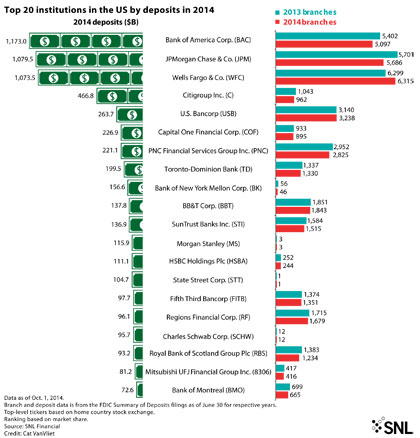 By total number of deposits, Bank of America Corp. repeated as the No. 1 bank with $1.173 trillion in deposits. Meanwhile, JPMorgan Chase & Co. and Wells Fargo & Co. broke the $1 trillion barrier in deposits over the course of the year, and JPMorgan leapfrogged Wells Fargo for the No. 2 spot. However, Jeffery Harte, an analyst with Sandler O'Neill & Partners, told SNL that JPMorgan's gain was likely similar to that of State Street's.

"JPMorgan is right up there with State Street and Bank of New York [Mellon Corp.] as one of the biggest trust and custody banks out there," Harte told SNL.

As such, those deposit gains might be in danger once rates rise, so Harte said it was difficult to know whether JPMorgan had actually overtaken Wells Fargo on core deposits.

"Those are probably the deposits that, assuming the Fed eventually raises rates, will run off the fastest," Harte told SNL.

Broken down geographically, 47 out of 50 states posted year-over-year gains in total deposits, the data shows. The only states to post declines in deposits were Rhode Island, with its deposit base shrinking by 6.1%, followed by North Carolina with a decline of 2.35% and Virginia with a decline of just 0.34%. At the other end of the spectrum, Minnesota led all states with a 20.26% increase in its deposit base, followed by Massachusetts with a 20.05% gain.

While banks were growing deposits, they reduced their branch footprints by the largest amount in two decades as the increased prevalence of mobile and online banking reduce customers' need to enter a physical branch. 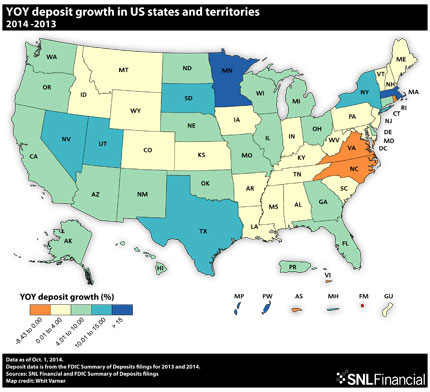 Broken down by company:

• Bank of America cut the most branches on an absolute basis, shedding 305 net branches over the year.

• U.S. Bancorp was the far-and-away leader in terms of adding branches, increasing its footprint by 98 net branches over the 12 months ended June 30, driven by its purchase of 103 branches from Royal Bank of Scotland. The next bank on the list was East West Bancorp Inc., which added 13 net branches over the year.

FIG Partners' Marinac told SNL that banks might not need to slash branches if they could trim expenses in other ways.

"My opinion is that we have a square-footage problem in the industry and less of a branch problem. If we kept the same number of branches but shrunk the amount of square footage, we'd be a lot better off a lot sooner," Marinac said. "I would welcome examples of banks that can offload a portion of their space to a Subway or a Starbucks." 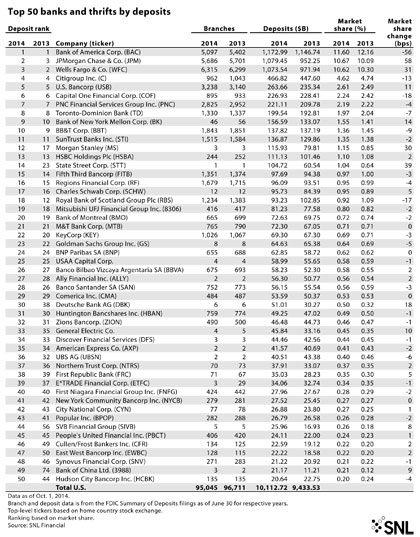