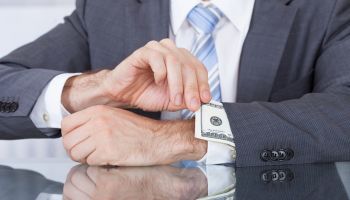 These business owners allegedly conducted financial transactions involving the receipt of bulk cash from unknown sources used to pay for the export of goods to Mexico.

The now-public indictments described this money-laundering effort as a Black Market Peso Exchange scheme, a form of trade-based money laundering. The Sept. 10 raid resulted in the seizure of $100 million in cash in one day, described by one source as an “historic” amount. [Hear contemporary audio report and a slideshow about the federal sweep on L.A. radio station KPCC.]

Message behind the push

This raid sent shockwaves around the world as it brought attention to the significant problem that legitimate businesses, whether unwittingly or not, may play a crucial role in laundering illicit proceeds.

For example, in the indictment against Q.T Fashion, a maternity store allegedly received ransom money in bulk cash that was used to pay for the release of a U.S. citizen held hostage for several months and who had been beaten, electrocuted, shot, and waterboarded by a Mexican drug trafficking organization.

The National Drug Intelligence Center reported in 2009 that Mexican and Colombian drug trafficking organizations annually generate, remove, and launder between $18 and $39 billion in wholesale distribution proceeds, and that billions are laundered annually through trade. Trade-based money laundering is not a new phenomenon, but rather, the Justice Department is focusing more attention on dismantling this sophisticated money laundering scheme, as it appears the stakes are growing higher and lives are endangered.

This instance was not the first time this year when the Justice Department aggressively pursued corporations that have found themselves tangled in a web of financial transactions that promote or conceal crimes. Justice will continue prosecuting corporations that fail to comply with anti-money laundering laws, and may use additional resources to assist in this priority, including the Financial Crimes Enforcement Network (FinCEN).

As early as 1997, FinCEN issued advisories alerting banks and other depository institutions of the Colombian Black Market Peso Exchange scheme. FinCEN acknowledged that drug sales at that time were $57.3 billion annually, consisting mostly of cash. The BSA reporting requirements are aimed at detecting large cash transactions and reporting suspicious or unusual activities to the appropriate authorities.

FinCEN stated back then that, “[i]n simple terms, the Colombian cartels sell drug-related, U.S.-based currency to black market peso exchangers in Colombia who, in turn, place the currency into U.S. bank accounts. The exchangers then sell monetary instruments drawn on their bank accounts to Colombian importers who use them to purchase foreign goods.”  (FinCEN Advisory, “Colombian Black Market Peso Exchange, Nov. 1997, Issue 9.)

Between June 2010 and May 2014, FinCEN issued advisories concerning the effect that Mexico’s 2010 restrictions on U.S. currency may have on U.S. banks. In May 2014, FinCEN’s advisory noted that restrictions on U.S. currency transactions in Mexico may have led criminal actors to use additional schemes, such as “funnel accounts” in conjunction with trade-based laundering, to launder illicit proceeds.

The Aug. 1, 2014 GTO requires enhanced reporting by armored car services and other common carriers of currency at the San Ysidro and Otay Mesa Ports of Entry in California. FinCEN also issued guidance concerning detailed and proper filing of Currency and Monetary Instruments Reports, which are filed when $10,000 or more in currency is moved across the U.S. border.

And in direct response to the Sept. 10, 2014 federal raid led by the U.S. Attorney's Office in the Central District of California, FinCEN issued a GTO, effective Oct. 9, 2014, which affects over 2,000 businesses in the Los Angeles Fashion District.

This GTO imposes strict reporting and recordkeeping requirements on businesses that are covered under the GTO, including, but not limited to, garment and textile stores, transportation companies, travel agencies, electronic stores, and beauty supply stores. Specifically, it requires a covered business to file a Form 8300 when it receives in excess of $3,000 in currency in one transaction (or two or more related transactions within a 24-hour period), and to also ask for and report identifying information about the person delivering cash, among other requirements.

The trilogy of indictments that were made public on Sept. 10, 2014, demonstrates an increased effort by law enforcement to combat the laundering of illicit proceeds by U.S. businesses that export goods to Mexico and Colombia.

Before the three indictments were filed in 2014, the Justice Department had prosecuted two toy stores and a silk flower company in the Los Angeles area for trade-based money laundering:

The owners pleaded guilty to conspiracy to structure financial transactions and were sentenced to 37-months imprisonment. The company was ordered to forfeit $1 million. More than $8 million was funneled into Angel Toy’s bank accounts over a four-year period, according to sentencing papers, and each deposit was for less than $10,000 to avoid reporting requirements.

Subsequently, Woody Toys, its owners, three employees, and two Mexican customers were charged with conspiracy to evade reporting requirements and launder money, and were believed to have laundered at least $6 million in six years.

The indictment alleges that a Mexican customer purchased “narco-dollars,” which is how he was able to get a cheaper exchange rate for the U.S. dollars. That Mexican customer and Woody Toys pleaded guilty to money laundering conspiracy, while the owner and employees pleaded guilty to conspiracy to evade financial reporting requirements. The owners received a collective sentence of 38 months and the company was ordered to forfeit $2 million.

• United States v. Peace & Rich Import, Inc., et al., CR 13-107 (C.D. Cal. 2013). The owner of a silk flower company was charged with conspiracy to operate an unlicensed money business, failure to file CTRs, structuring financial transactions and aiding and abetting. The owner was sentenced to 12 months imprisonment and admitted that he distributed over $1 million in cash received on behalf of Mexican businesses to other businesses in Los Angeles for a period of three years. The company forfeited $2 million.

• In United States v. Q.T Fashion, Inc., et al., CR 14-372 (C.D. Cal. 2014), a maternity store, its owner, manager, and the Mexican business that allegedly purchased maternity clothes from Q.T Fashion, as well as its employees, were charged with conspiracy to launder money and operate an unlicensed money transmitting business.

Q.T Fashion allegedly accepted ransom money that led to the release of a U.S. citizen being held hostage and tortured by a drug trafficking organization in Mexico. The indictment also alleges a conspiracy to smuggle goods from the U.S. for the altering of clothing tags from "Made in China" to "Made in America," in order to obtain preferential tax treatment under the North American Free Trade Agreement.

• United States v. Pacific Eurotex Corp., et al., CR No. 14-521 (C.D. Cal. 2014). A textile company with customers in Mexico, Guatemala, Colombia, and Peru; its owners; and its employees were charged with conspiracy to launder money, structuring currency transactions, and failure to file the required currency transaction report in a non-financial trade or business.

Notably, the corporations involved in the trade-based money laundering investigations exported goods to Mexico and Colombia. This common characteristic is a hallmark of a trade-based scheme.

Moreover, all of these prosecutions demonstrate a growing trend to charge corporations, its owners, employees, and foreign customers for violating federal anti-money laundering laws. Consequently, several owners of small businesses have been sentenced to lengthy imprisonment terms in addition to forfeiting millions of dollars to the government.

The Justice Department appears to be targeting the following activities by corporations:

• Failure to file an IRS Form 8300 by any person who receives more than $10,000 in one transaction or a series of related transactions while conducting their trade or business.

• Breaking-up cash and structuring currency deposits—making multiple deposits of not more than $10,000 in cash to evade the filing of a CTR by a financial institution.

• Receipt of bulk cash from unknown individuals and subsequent disbursement to another in the U.S.—i.e., operating an unlicensed money transmitting business.

• Maintaining U.S. bank accounts into which anonymous structured deposits are made in cities where the accountholder does not have any ties.

• Maintaining different sets of cash receipt books and bookkeeping records to break up cash transactions or create multiple invoices in amounts not more than $10,000.