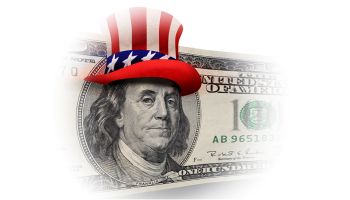 The U.S. Treasury still holds stakes in 63 banks and thrifts as part of the Troubled Asset Relief Program, which was signed into law over six years ago in 2008.

The 63 stakes are in mostly smaller banks, with a median asset size of $289.2 million. The Treasury said on its website that it is focused on recovering TARP funds "in a manner that maximizes returns for the taxpayers" and promotes financial stability. 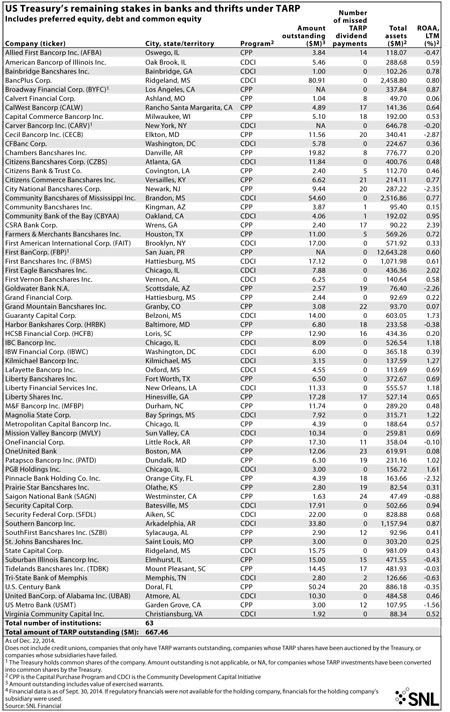 Of those 63 banks and thrifts, 35 are part of the Capital Purchase Program, which was one of the first bank investment programs launched after the passage of TARP.

Under the CPP, the Treasury provided capital to banks in exchange for preferred stock or subordinated debt as well as a warrant to purchase additional securities. The banks then had to pay dividends or interest payments to the Treasury as part of the terms of the investment. Some companies later converted the Treasury's investment to common stock or trust-preferred securities in order to improve their capital ratios.

And 28 of the 63 companies are part of the Community Development Capital Initiative, which was launched in February 2010 to provide a cheaper alternative to the CPP for institutions that serve underbanked communities.

As of Oct. 8, the Treasury also held investments in 109 institutions that had refinanced their CPP or CDCI securities into shares or debt issued under the Small Business Lending Fund. The SBLF is similar to TARP in that the Treasury provides capital to institutions in exchange for preferred stock or subordinated debt. The capital is meant to be used specifically to fund small business loans.

In all, the Treasury funded 707 institutions under the CPP. According to the Treasury's monthly report to Congress released Dec. 10, 254 of the institutions exited the program by repaying the Treasury. The Treasury exited 185 of the stakes by auctioning the shares or debt to other investors, and 137 of the companies refinanced their CPP shares to become part of the SBLF. The rest of the stakes were exited through sales or through the merger of CPP participants. Additionally, 32 of the CPP participants went into receivership or bankruptcy, giving the Treasury little to no chance of recovering the invested funds.

The 63 banks and thrifts listed in the table do not include institutions where the Treasury holds only the outstanding warrant issued under TARP. It also does not include the 36 credit unions participating in the CDCI.