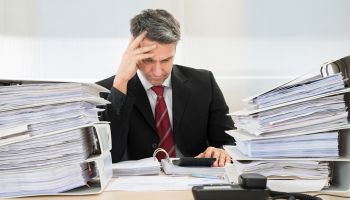 Rethinking of the relationship between corporate boards and top management has been going on for years, with periodic milestones such as the Sarbanes-Oxley Act, the Dodd-Frank Act, and regulatory pronouncements from banking regulators, notably the Comptroller’s Office.

A significant shift over that period has been the advent—indeed, the encouragement—of what could be called the “adversarial board,” brewed in the apparent belief that management is inherently in need of watching and checking.

The message consistently delivered to boards in recent years is “the idea that they are supposed to be on the opposite side of the table from management, and that’s wrong,” said Ted Mathas, chairman, president, and CEO at New York Life. Mathas spoke during a CEO panel at the Financial Services Roundtable’s spring conference. Corporate governance was a big part of the panel discussion.

“To be on the same side of the table somehow means that you’ve been co-opted,” as a board member, Mathas said, and he strongly disagreed. Mathas said that clearly many issues require a dialog, to get everything out on the table, but not everything need be a battle of wits. Mathas disagreed with the increasing use of board executive sessions, where management typically steps out to allow free-flowing deliberation.

“Many significant discussions happen in executive session,” said Mathas, and excluding management, which knows the issues from daily involvement, often seems counterproductive to him. Matters involving his own performance and compensation, he said, by all means should exclude him. But long sessions without management present, that he questioned.

“If it’s more than a few minutes long, you wonder what they’re talking about,” quipped fellow leader, and panel moderator, Richard Davis, chairman, president, and CEO of U.S. Bancorp.

Much of the current state of affairs between boards and management appears to arise from a misunderstanding of their appropriate roles, said panelist Kelly King, chairman and CEO, BB&T Corp.

“There’s a difference,” King said, “between management and oversight.”

King believes efforts to bring about greater engagement by boards in their companies’ affairs pushed attitudes so far that engagement became micromanagement. Involvement of boards in such areas as vendor management, for example, beyond straightforward oversight, was one of the examples King cited.

“Boards are primarily there to provide strategic insight,” King insisted. “We need them to help us see things we cannot see, because we are immersed in the business every single day. The more we shove them into the details of the company, the more we lose them on the strategic part.”

King said the banking industry has pushed back on such encroachment, often contained in regulations and related proposals. He believes institutions have made some points with the regulators and that some adjustments have been made. He called on fellow bankers to keep up their pushback, to avoid further confusion of the roles of board and bank leaders.

“We all started thinking that ‘credible challenge’ means criticism,” said U.S. Bancorp’s Davis, referring to a term raised in multiple contexts in banking, including guidelines from the Comptroller’s Office for heightened risk management in larger organizations.

“But it doesn’t mean that,” Davis continued. “It means [for the board] to know enough to know to agree with management.”

That is, he explained, “without a platform for challenging management, then you [as a director] probably aren’t really sure that you agree with it.”

Related to the balance between board and the C-suite is the issue of collegiality on the large financial board itself. Mathas reflected that companies face a balancing act here, too, because while they want board members to work well together, a board also requires fresh thinking, brought about by turnover. The panel discussed the pros and cons of mandatory retirement for board members.

BB&T’s King noted that there are other ways to maintain boardroom vigor besides retirement. At his own organization, for example, directors are not permitted to take up a permanent seat on a given committee. You wouldn’t find one of his board members, for example, spending 25 years on the Audit Committee. King said that after a two or three year stint on a committee, a BB&T director must leave that committee and rotate to another.

“Keeps them on their toes,” said King.

The increasing emphasis on many facets of risk management highlighted the panel’s view that working with regulators has no simple answers—harder effort and spending will be necessary for some time.

As a result, King said BB&T is in the midst of a $350 million project to put in a new general ledger system.

“In order to comply and to do proper risk management, we have to spend a lot of time and money on how we build our systems,” said King.

Communication is also critical, according to Margaret Keane, president and CEO of Synchrony Financial, formed by the spinoff of certain business lines, chiefly store credit cards, from GE Capital, in mid-2014. As she has worked with regulators as Synchrony gets systems and protocols in place, Keane has found that they want banks to be as transparent as possible on risk controls.

Walking regulators through the bank’s systems and reasoning helps, she believes.

“We need to bring them along in the process,” said Keane.

Keane said bank staff has to get risk management, too, and part of that involves accountability. “Accountability goes all the way down,” said Keane. “Everybody has a role to play.”

An issue that has affected large banks is the intersection of risk and incentive compensation. This clearly concerned King, who took some ribbing on the matter from Davis.

King acknowledged that some of the regulators’ measures have had their points, but he urged them not to damage good things in the process.

He pointed out, by way of example, that deferring compensation for mortgage loan officers over several years would seem to have appeal because of its impact on risk.

“But I don’t think that it works in the real world,” said King.

“The world needs to understand that we are trying to pay in accord with healthy risk management” overall, said King. “But we need to be careful not to change too much, too fast or we won’t understand the unintended consequences that can occur.”

Innovation and workforce at large institutions

The governance discussion was only part of the wide-ranging talk panelists had.

Two areas the panel delved into were innovation and workforce development.

“I’m a big believer that innovation is going to be key for the financial services industry and technology has to be our friend,” said Keane. Her company formed a group called “Innovation Station” that brings together a young team of bankers to look ahead, to see what tomorrow’s big thing will be.

Keane said she had tapped academic research that found that millennials work best in groups—“They date in groups,” said Davis with a smile—and they actually get to a better place working in groups. A key element of this group’s work is on mobile issues.

“We work with retailers and everyone is shopping on mobile now,” said Keane. “We’ve been able to jump over some of our competitors because we took a real focus on this.” Keane said her experience with Innovation Station was so positive she has launched two more such groups.

Regarding workforce development, Davis pointed out that his organization banks 19 companies in the Fortune 500 and he hears much from their leader about labor.

“Most of those CEOs are desperate,” said Davis. “They say they can’t find enough people—they don’t know where they are going to come from.”

“I share a little of that,” Davis admitted, “but not at the level where they are. We usually find good people and if we don’t, we train them quickly.”

As a quasi startup, Keane said Synchrony hired 1,000 people to fill in middle management gaps that became apparent as the bank pulled away from the rest of GE Capital. At the same time, she said, the company benefited from its corporate heritage, drawing on GE training programs to set up its own corporate education efforts.

Keane noted that hiring millennials has been a challenge because the group tends to want their job to mean more than money. To meet this, they arrange for millennial hires to work on community-oriented projects arranged by Synchrony.

King said that BB&T has found that the Baby Boomer generation’s longevity in banking has turned out to be erratic. Some boomers will clearly work up to 70, but others will retire as early as 55. The company became so concerned about experiencing gaps in key leadership areas of its structure that several years ago it paid up to secure MBAs.

These new employees are brought aboard to be fast-tracked into gaps. King explained that they come aboard and work several assignments in yearlong stints to develop abilities and understanding of the organization. King said the intent was to have them ready to step into open senior management slots within five years of coming aboard.

Employee retention also means much to King. He said his bank is unusual in that it still offers a defined benefit pension plan, as well as a very generous 401k match.