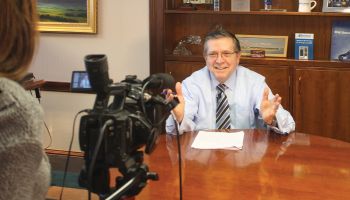 Everybody’s trying to figure out social media,” says Bob Mahoney, president and CEO at $1.4 billion Belmont Savings Bank, Belmont, Mass. “It’s like finding a rifle in the woods and not knowing what it is. You fire it and you figure out how it works.”

There are CEOs who write blogs, and there are CEOs who tweet, some quite regularly. There are even a few CEOs who know what Pinterest is. While Belmont Savings’ marketing people do their share of such social media, Mahoney doesn’t get into those platforms. What he prefers is video blogging, in a series called “Mahoney Money Minutes.”

“I do them in batches, when I get inspired,” says Mahoney. He’s done about 25 spots over three years. (Google “Mahoney Money Minutes” to see some.)

“I like to inform and to educate,” says Mahoney. “I thought being a smart friend would appeal to people.” The bank’s spots have had thousands of hits.

Mahoney’s on-camera style is that of a slightly gravelly voiced, wise old uncle type, who has doffed his jacket and decided to impart his financial life experience in a no-nonsense, noncommercial way.

“If you do the banking business long enough,” says Mahoney, “you learn a lot of stuff.”

Mahoney has been in banking since 1971 and lived and worked through four or five recessions, depending on how you count them. He sees the videos as a chance to get his thoughts together—sometimes after researching a topic and sometimes off the top of his head—and share them with area consumers. Mahoney makes a point of expressing everything he covers in everyday language, avoiding anything that would put off a viewer.

In a way, Mahoney has simply taken a facility for explaining things and figured out a way to deliver it to many, instead of by ones and twos in person.

“I’ve talked friends through financial questions hundreds of times,” says Mahoney. “I’ve been talking to people about such issues for 40 years.” Doing it in front of a camera doesn’t faze him in the least, it’s the same material.

“I can usually do it on the first take,” Mahoney says.

Recently Mahoney posted a trio of videos aimed at young people going out to job hunt for the first time. He broke the broad subject into how to pick a career; how to land an interview in that business; and how to have a successful interview.

This is just one set of a wide variety of videos, which have included buying versus leasing cars; renting or owning a home; handling marriage and finances; teaching kids to save; and financing a college education, among others.

Bringing family into it

It’s not uncommon for Mahoney to speak very much from personal experience. In a spot discussing how to set up an allowance, he opens by telling about how he tried a fixed allowance with his own three daughters and tried a variable one. He didn’t like the way either one worked out.

So he invented the “declining allowance.” Each daughter could draw on a pile of 20 singles stacked on the kitchen table during the week. However, if they talked back or otherwise misbehaved, Mahoney said, he’d reduce the allowance pile of the offender. They’d come to the kitchen expecting to go to the movies or buy a treat, only to discover Dad had levied a penalty.

Eventually, Mahoney says, his daughters got the message.

“This mixes the entitlement of an allowance with the behaviors you want to get,” Mahoney explains in the video.

Often, Mahoney says, he draws his subjects from a variety of published sources. Sometimes The Wall Street Journal Sunday supplement supplied to some city newspapers carries a story that gets him going. Other videos have been launched by stories in the Journal’s daily Personal Journal section. Others have been suggested by the time of year—when April approaches, Mahoney says that’s a natural point to discuss tax matters.

The week he was interviewed, Ma-honey decided the topic of his next video blog would be about personal ethics.

Clearly, Mahoney is more than a bit of a showman. Belmont Savings maintains some supermarket branches and the CEO has been known to give cooking demonstrations at the in-store locations. He’s done egg nogs, soups, and more.

Key to all this is that “I’m not selling anything,” says Mahoney. “There’s no sales pitch at the end.” He says this not only appeals to viewers, but helps the bank steer clear of compliance issues. Avoiding sales and sticking to general discussion and away from bank products keeps Mahoney Minutes from triggering disclosures and other requirements.

“That’s the bright line,” he explains.

Ultimately, says Mahoney, banking is a fundamental business to many people’s lives, and “there are so many ways you can teach people things.”

Producing his video spots is just one way Belmont Savings sets itself apart from the competition, says Mahoney, but it’s an important way. “People like to see bankers being human,” he adds.

This article originally appeared as part of the Idea Exchange section of the premiere edition of Banking Exchange magazine.