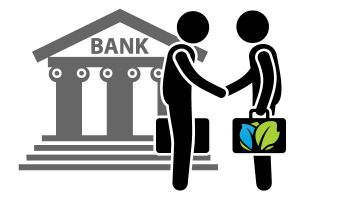 Kabbage, which advertises itself as the “#1 Online Provider Of Small Business Loans,” wants to partner up with traditional banks. Kathryn Petralia, co-founder and COO, told Banking Exchange about this strategy in February 2014, and the discussions going on then and since have begun to bear fruit here and abroad.

Kabbage started as an online alternative lender to online retailers, initially making merchant cash advances. Later, Kabbage shifted to making loans through a partnership with Celtic Bank, an industrial bank based in Utah.

Kabbage offers potential borrowers a completely automated experience that uses proprietary technology to render a small business loan decision in minutes using data generated through various business activities, such as shipping, online sales, and more. On its website Kabbage states that the company has funded over $550 million in business credit since its 2009 debut. The credits are short-term working capital loans.

In early March, Kabbage and MasterCard announced that the payments company would make Kabbage’s data and technology “engine” available to financial institution acquirers in the MasterCard network. Petralia explains that the payments firm wanted to bring new technology to acquirers that they could use to generate additional revenue using Kabbage’s engine to make their own small business loans. Kabbage will work with each interested acquirer individually, and Petralia says some discussions have already occurred.

Later in March Kabbage announced the first white-label licensing of its engine by Kikka Capital, which will unveil its small business lending program in May 2015. Kabbage will provide the platform, enabling onboarding, underwriting, and monitoring, while Kikka will manage operations, marketing, funding, and loan servicing. The deal marks the first expansion of Kabbage beyond the United States and the United Kingdom.

Petralia says other partnerships will be coming, as Kabbage continues to discuss licensing and other arrangements with banks and others. She says partnerships could involve either Kabbage business lending or Karrot, a consumer lending service launched last year that uses Kabbage’s engine.

What would drive the partnerships? “Banks are recognizing that change faces many regulatory hurdles” inside the banking business proper. She believes that this keeps banks from developing new systems such as Kabbage’s engine. But what banks do have a wealth of is relationships. Petralia sees the marriage of banks’ customer bases and newcomers’ technology as a natural.