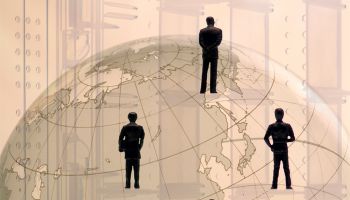 Illustration © George Diebold/Blend "When I woke up this morning and somebody in rural Montana woke up, we both saw the world. Do you think we are seeing the world the same way?" says Joshua Siegel. The community bank investor was interviewed in the March 2015 Banking Exchange magazine "7 Questions" section.

A flood of consultants, studies, and “facts” abound telling  community banks how they must change, and why. Community bank investor Joshua Siegel is calling “time out.”

Not that change isn’t necessary. But much of the thinking on the future business models for banks—and coverage of same—comes from metropolitan centers, Siegel points out. He likes to call this effect “geo-bigotry.”

“When I woke up this morning and somebody in rural Montana woke up, we both saw the world. Do you think we are seeing the world the same way?” says  Siegel, based in New York. “Our perceptions depend on the values that we grew up with and how we think.”

“The geo-bigot idea that young people everywhere don’t need people to go face to face with ignores reality,” Siegel says. “Go out and meet these young people outside of metro centers. They are not all leading-edge technophiles. They work at McDonalds, and they will go to work at a local factory. They won’t all go work for a dot.com.”

Siegel warns against letting the geo-bigotry of pundits completely dictate strategy. Yes, technology plays a critical, essential role in community banking, and Siegel doesn’t think a bank has a future if it doesn’t offer mobile banking,  mobile remote capture, and an internet-based bank.

Siegel isn’t recommending ignoring pundits, but he says their sweeping statements are just one view—just like, he points out with a grin, his own. Siegel is CEO of StoneCastle Financial Corp., a closed-end investment company investing in community banks. He is also managing partner and CEO, StoneCastle Partners, LLC, which provides funding and lending aid.

Q1. Josh, you are quite the skeptic, aren’t you?

People often ask me how community banks still exist after all these years. I always say that it’s not because they have better technology, a broader range of services, or better pricing. What they do have is customer service and that’s why people come to them—the relationship.

Most Americans work paycheck to paycheck. The small accounts they have, they want to know the money is safe and in a place where they can get to it. They want someone who understands their place in the world, someone who will give them a loan to send their kid through school or to buy a used car.

It’s a matter of “place.” And for community banks, that is still defined by geography. If not literal geography, then by affinity, such as ethnic banking or a military connection, like USAA.

For most banks, the key remains having a CEO who is charismatic and possesses or employs good credit management. The CEO must represent the community almost like the mayor. You need someone who gives local customers confidence and comfort. Someone who has the discipline to protect local depositors and yet creativity enough to see opportunity in relationship lending.

Community banking is not going to be like “Moneyball,” where some 26-year-old computer jock is going to come in and shift the bank to automated pricing models.

Q2. But such models are increasingly being used, aren’t they?

One of the things we learned—let me restate that, one of the things I hope we learned—through the recent crisis is that loans that were made directly between a borrower and a lender had far better performance ratios than loans originated by some kind of broker or other third party and then resold and repackaged.

You can use statistical modeling and probability. But the reality is that there is a human component to making a loan that has an effect on results. It is important that a community banker can stare the customer in the eyes. It is important that borrowers can see the banker walking the streets in their community. Then they are less apt to assume, “It’s no big deal if I default.”

Statistical modelers try to fit their curve to reality, but reality has some unpredictability to it.

Q3. Yet people do a lot of business on the web now. Why not community banking?

In the virtual space, Zappos is considered to offer some of the best customer service that’s out there. Guess what? They put a massive amount of time into human training. So, let’s say our bank is now all-virtual—I don’t think that will happen, but let’s say it does and there is no physical location any more. You don’t think that customer service and interpersonal relationships still matter?

If 6,000 banks all go algorithmic and digital, what will differentiate them from the next guy? How will they compete for customers? How will you win if you have one person facing the customer and 99 facing inward?

Guess what? You’ll be out of business. Why? Because the bank next to you will put two people on the front end. And the next bank will put three people up front, and the next one four people.

Q4. Amid lots of talk about market disruption, there’s regulatory disruption in the form of the Consumer Financial Protection Bureau. How has it moved the needle?

CFPB is a big stick stirring the pot. No one is quite sure what things are supposed to look like because things are entirely jumbled. I don’t think anyone—except the director of CFPB—would say there’s more or less consumer abuse. CFPB created enormous uncertainty, with all good intention. It assumes it is fixing problems, doing what it thinks is right.

But you may solve consumer abuse in the mortgage market by making sure that a bank never lends to a customer again. I don’t know if the Bureau’s “better” is really better. It may be worse. CFPB may protect six people, but it might prevent 10,000 who otherwise should have been fine getting a mortgage from getting one.

Q5. You spoke about the need for tech essentials. What other essentials do you stress for community banks?

Every bank leader has to be thinking about succession planning. Not just what happens when I retire or die, but what happens that you can’t predict, such as a tornado that kills the chief lending officer and the CFO. And investor succession—what happens if one of the bank’s big shareholder sells to someone who is not a friendly party? For a closely held bank, it can make a big difference.

Community bankers must consider not only this, but who the next set of board members will be. That, along with management succession, of course. If you don’t think of such things now, the world will pass you by.

When I ask many bankers about these things, I get a puppy dog look. They really have not thought about them.

Q6. What are you seeing in recent deal trends?

Many of the deals I’ve been seeing appear to be more sell-focused than buy-focused—buyers bought not because they were looking at a market but because somebody lowered their expectations and put their bank up for sale. They decide they would be better as part of something else, rather than remaining independent. They see that they can only take their stock so far. But if they can get on board with a leader who has a vision and a view and who can execute, they’d rather put their stock into that banker’s hands even if it means getting a lower transaction price.

This is sinking in. The expectation that we are going to bounce back and see two or two and a half times book fades more with each quarter.

Q7. What should observers look at when evaluating community banks?

Capital ratios—total capital, Tier 1, and Tier 1 common—will tell you a lot about a business. The efficiency ratio, combined with ROI, is going to prompt big questions about survivability. Not in terms of living or failing, but in terms of remaining independent.

Right now, interest rate exposure is very important. How negatively gapped is the bank? What’s the duration match between its liabilities and assets?

The bank’s funding cost is critical. A low cost of funds means there’s a likely buyer if the bank gets into trouble, but it also means a huge competitive advantage on the loan side. Lower funding cost allows you to underprice your competitors, to be able to win business away.

I think 30-to-90 day past dues are frequently overlooked. There are very few metrics on a bank’s balance sheet that are predictive. Past dues, however, say, where am I going? They give an immediate sense of people falling behind on their payments. Those numbers are maybe looking four feet in front of the car. But at least it’s in front of the car.