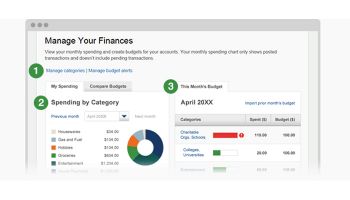 Personal financial management is one of the areas improved in the latest iteration of Bank of the West’s online banking service.

Chances are, you own or have access to at least three online devices: a desktop or laptop computer, a smartphone, and a laptop. What’s your device of choice?

Bank of the West’s tech staff embarked on a major redesign of the company’s online banking service with the recognition that customers’ choice of device varies by time of day.

First thing in the morning, says Jamie Armistead, executive vice-president, digital channels, people tend towards mobile devices. They wake up and check in on their smart phones. They commute and use their smart phones en route.

During the workday, most deskbound workers use their computer keyboard and mouse for transacting online banking business. It’s right there in front of them.

Come evening, says Armistead, increasingly people are using tablets for all kinds of things, including their online banking. And overall, he says, the bank finds that usage of its browser-based online banking service is double the level of its online banking app for smartphones and tablets.

This was just one of the elements the bank considered in redesigning its online banking site, which debuted in its new look and functionality recently. The bank announced the changeover in late May.

Overall, the bank, tapping user testing, stressed design that was more intuitive, shifting from a tabbed approach to menus. Wherever possible, the new design uses buttons and the like, to make fatter targets that offer ease of use for both keyboard users as well as tablet users who need finger-friendly navigation. Armistead says that while its app can be used on tablets as well as smartphones, the bank wanted the browser-based version to be compatible with users accessing it via tablets in their evening time.

While navigation was only part of the redesign, it reflects the site revamp’s stress on a better customer experience. Armistead says that new features enable customers to move quickly from one section to another with an eye on easier money management. The service’s accounts overview page now sports a dashboard approach, for example, enabling the user to get a better idea of what’s going on with their money all in one place.

Moving from the previous approach to the final product was something of a journey, according to Armistead and Vivian Yeung, head of online banking and payments at Bank of the West.

New editions of several underlying systems had to be implemented simultaneously, and in synch with each other, but the end-user’s needs had to be kept constantly in focus. Multiple levels of customer testing, with revisions at each stage, had to be conducted to get where the bank wanted the product to wind up.

Among the key features:

• Secure payments and transfers, including ways to pay bills, pay other people, and to transfer funds within the bank or to and from other financial institutions in the U.S.

• A look ahead, in which users can view a snapshot of payments  and transfers scheduled to take place.

• Customization, even allowing users to create nicknames for payments.

• Budget alerts, which can be sent, along with other types of alerts, to mobile devices.

• Financial aids, for example, a “My Spending” area that uses pie charts and more to help track spending and provide month-to-month comparisons. Spending is categorized automatically, but users can override this for their own preferences.

You can view a short video about the revamped online banking site here.

In the meantime, the bankers say, staff is already at work on the next round of improvements, set for debut later this year.