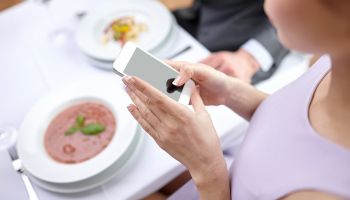 Digital banking technology keeps making it much easier for U.S. consumers to manage their finances on the go. So easy, in fact, that a third of them bank on their phone and online more than a year ago—and many are doing it at work, at the store, or even while on a date.

Where and when Americans go mobile

• Bank at work. More than half (54%) use their mobile banking app at work. One in ten checked in with their bank during a client meeting.

• On personal time. Consumers reported using mobile banking apps while at a restaurant (39%); in a check-out line at a store (38%); and during a date (17%)—likely to ensure there's enough money available to avoid an embarrassing situation.

• During “holding patterns.” They're also checking in with their bank during coffee or smoking breaks (37%); commuting (28%); and waiting to pick up a child from school (24%).

"This survey tells us what our customers have shown us over the last two years," says Barry Sommers, CEO of Chase Consumer Banking. "They love the ease of handling their routine banking online, on their phone, and at an ATM."

More consumers are using their mobile app (33%) or banking online (35%) than last year while only 16% are stopping by branches more often.

Overall, more of the 1,500 adults Chase surveyed are using a bank's website or online portal (70%) than using a bank's app on a mobile phone or tablet (47%).

Not just a cash machine anymore

As ATMs grow smarter, the survey found that Americans recognize the numerous capabilities of these machines:

One third (33%) of millennials are using their bank's ATMs now more than a year ago, compared to 16% of GenXers and 10% of baby boomers.

The survey found that Hispanic consumers are turning to banking technology at a higher rate than others. Nearly half are using banking apps (45%) and a bank's website (48%) more than a year ago.

They are also using their banking app on the go more than the rest of the population: