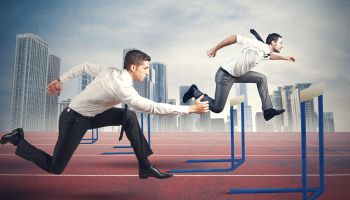 During a panel session at D+H’s annual client conference, Bill Neville, president of the Lending and Integrated Core Solutions business for the Canadian-based bank technology company, said tech disruptor companies have a bigger hurdle to clear than banks do. He explained that while these tech startups often come up with a simpler way of providing some specific financial service, banks will be able to catch up to disruptors’ technology advances more quickly than the nonbank firms will be able to deal with bank compliance.

As the newcomers gain size and scope, Neville said, they will come squarely in the sights of the Consumer Financial Protection Bureau or one of the prudential regulators.

Following the panel discussion, Banking Exchange Editor and Publisher Bill Streeter interviewed Neville and Lindsay Sanchez, D+H marketing vice-president, to gain further insights on the above point as well as other bank technology developments. Neville is an experienced hand in the bank tech field, having worked at Citibank, BISYS, and IBM, among other firms. Sanchez brings an outsider’s view to her D+H duties having worked eight years at Citrix.

Here are the key points the two executives touch on, below:

• Impact of disruptor companies and where they have the most impact.

• How software as a service (SaaS) and cloud computing is changing the bank tech environment.

• Regulators’ impact on banks and their vendors.

The following is an edited recounting of the conversation. 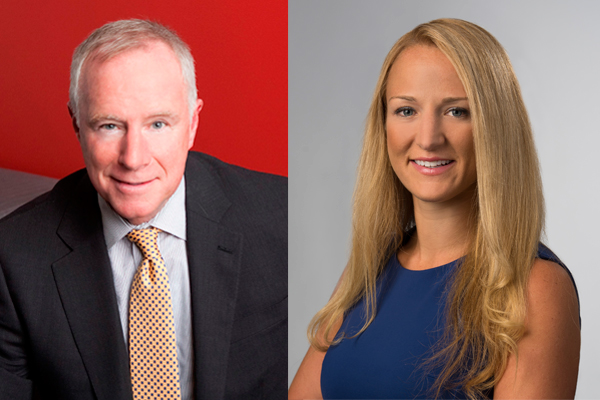 Banking Exchange: Can you expand on your point about banks’ advantage versus nonbank disruptor companies?

Neville: Banks are always asking us about the disruptors. Recently Gerrard Schmid [D+H CEO] and I had the opportunity to meet with some innovative tech firms in Silicon Valley. They use incredible technology and new ways of doing things. But when you think about it, what they’re really doing [the ones in the lending business] is matching lenders and borrowers in direct and efficient ways.

These alternative lenders have created a very clean and simple loan origination process. It’s leading people to say things like, “That’s going to disrupt banks business,” or “Everybody needs banking, but nobody needs a bank.”

We look at this differently.

The process of originating a loan is not only putting the buyer and the lender together, it’s performing credit analysis, and adhering to the myriad of compliance regulations. We provide software to automate these processes. In some cases banks have manual processes or rely on attorneys. Either way they all have a process for underwriting and compliance. The nonbank disruptors don’t have that. Without sophisticated credit analysis and without the compliance side, it’s going to be a dead-end road.

As one banker said to me about disruptors, “I can originate a lot of poor loans really quickly, too.”

So I suspect that two changes are going to affect the disruptor companies. One is that CFPB is going to focus on the nonbank lenders, and when they do, things like TILA/RESPA are going to represent major challenges to the non-bank lenders. And, two, the banks have access to the same technology that disruptors use. What banks need to do with that technology is focus on different ways of putting the borrower and lender together.

Sanchez: One area where you’re seeing much more nonbank action is on the small business loan side because some commercial lenders apply the same process regardless of whether someone’s asking for a $10,000 loan or a $100,000 loan, even though the risk is likely very different. Some of the alternative lenders have a faster and better proposition in that space, where a lot of the banks have said “No” to loans that actually might be approved if they didn’t apply the same rigor and the same process as they do for their general commercial lending business. These loans actually look more like a consumer loan,where they probably would have said, “Yes.”

So the question becomes, how do you automate parts of that process so that you treat some of those loan applications differently and go after some of the areas that nonbank lenders are trying to capture? You can’t do it by dedicating the same number of people or applying the same processes as you do for general commercial loans.

Neville: I agree. Consumer lending applications are much simpler to automate mainly due to lower dollar value and therefore risk. But when you look at real estate lending—mortgages and commercial mortgages—you really need to have the analytical sophistication and compliance capability. So I don’t believe banks are at risk there.

Where I do think banks are threatened by disruptors is in payments. Venmo [the person-to-person payment system owned by PayPal] is one. My kids use it. You share a restaurant bill by using one credit card and everyone “venmos” their share real-time to the credit card owner.

Eventually the “venmos” clear through a bank. But that kind of payment is truly disruptive, because even though people are keeping money in a bank, it takes another part of the process away from the bank. [Apropos of Neville’s earlier point about compliance, Venmo, as a money service provider, has to comply with the Treasury Department’s Office of Foreign Assets Control rules. – Ed.]

Banking Exchange: You mentioned software as a service (SaaS) before. What’s the significance of that approach?

Neville: It’s all about user experience. With our Mortgagebot point-of-sale and loan origination systems, for example, the bank doesn’t have any software on premise. So there are no servers, and nothing to take care of. There is no custom code in there. It’s available to anybody in the bank who has an internet device, restricted by information security policies.

Sanchez: It’s about having a web-based application versus a Windows-based application. Many companies are moving away from Windows-based devices to MacBooks or iPads or Android devices, or others. The millennial generation is not accustomed to using Windows devices. And when they get into the workplace, they’re going to expect the same devices they are accustomed to using in their personal lives.

SaaS ultimately gives an employee the ability to work from any different device that they have, and from anywhere as well.

A banker on our media panel gave a great example of it. He was is in Gold’s Gym for a workout and ran into one of his loan customers. He had his iPad with him and was able to help the customer finish the application. He could actually get into the bank’s system.

That’s what SaaS technology enables you to do, with the necessary log-in processes. You’re not as limited or tied down to a physical work station in a branch where the job used to happen. I think that has a huge impact on the way bank employees work and serve their customers.

Banking Exchange: SaaS is closely related to cloud computing, or is it actually synonymous?

Neville: It is cloud, really. Any device that can access the internet can access that application because we’re hosting it, centrally.

Remember the old days of Intuit’s TurboTax? They’d give you the free diskette, you plug it in, do all your stuff, and that was it. You threw the disk away and they’d give you a new one next year. Now, of course, you can just log onto their website.

Banking Exchange: Is your LaserPro product going to end up being a cloud product?

Sanchez: The reality is many of the larger banks that use products like LaserPro have their own private cloud type of environment, where the infrastructure looks very similar to the Amazons of the world. So they actually host it themselves. But I think even that is not probably the right long-term answer.

Neville: We are rapidly moving to where all software will be hosted by us centrally. It will have to be if all banks want to get to a real untethered environment.

Banking Exchange: Bankers might find it interesting how the exam process works at bank technology vendors.

Neville: We get the same FFIEC teams that examine the banks. D+H is a TSP—Technology Service Provider, in what they call the multiregional category—which results in over 400 auditor days on site.

I happen to believe that the examiners are focused on exactly the right things—information security, disaster recovery, business continuity. I believe also that our reviews are more stringent since we represent thousands of financial institutions. The FFIEC examiners use a rating system of 1 through 4. With 4, a vendor is going to get a letter to its board and to the boards of every one of its clients.

Banking Exchange: I’ve heard that banks are interested now in consolidating some of their vendor relationships. Are you hearing that?

Neville: There are a couple of points to make here. First, I believe that we are hearing vendors say that more often than we hear banks say it. Bankers want the best product, whether it’s from one vendor or more. For example, if a core system customer wants a different internet banking system because it has features they want, historically most core providers would put up as many walls as they could because they want the extra revenue.

I don’t think that’s right and I think that can be a competitive differentiator. Bankers want the best product, and they also want it integrated. And sometimes those two don’t go hand in hand.

That said, the regulators are really serious about proper vendor management. If you have the right vendors that shouldn’t be a difficult thing to do. So I would come down on the side of banks want the best product that they can have well integrated.

Sanchez: I would only add that as a tech company we can work to make sure our products integrate super well together because we own all the pieces of software and you can’t do that to the same level when you don’t own the entire software stack. That in and of itself can also be a differentiator because if you can figure out integrations that simplify work, it makes it a lot easier for banks from an installation or a maintenance perspective.

To be able to integrate pieces together is as much value as adding a feature to a product itself. That’s when vendor consolidation starts to make sense. But you have to have world-class products to stack up against a competitor’s. Banks are probably not going to pick a worse product just because it integrates.

Banking Exchange: How does a large technology company stay agile in the way some of the disruptors are?

Neville: That’s a difficult and really good question. I don’t think anybody does it as well as they should. We’re getting there—it’s something the company takes very seriously. One step we’ve made is to bring in people who can help develop that culture—people from innovative companies such as Citrix, where Lindsay is from, and Intuit, and others. They mix with the people already here who are very knowledgeable and understand how everything works in the company and the industry and they are leading us through a cultural change.

Also key is this whole concept of the community of banks. Among our 6,000 clients out there are some really innovative banks and credit unions. We tap into those other viewpoints and collaborate with these institutions.

Sanchez: As an example of that, we had 2,300 people that attended 42 user groups this year. Those were feedback opportunities for us. Not just “fix this” or “do this little thing.” But “What would really make a function different. What would make it better? What else we could be doing?” We are trying to bring the community together.