Banks continued to shrink their collective U.S. branch count in 2015, trimming it by more than 1,600 locations, an SNL Financial analysis shows.

As Americans increasingly do more of their banking business online and via mobile devices, and as banks look to cut expenses and bolster efficiency, most banks have taken the view that fewer branches are necessary to meet customers' needs.

Many banks are shuttering some branches and selling off others, bringing down employee headcounts and brick-and-mortar costs along the way. They are reinvesting some of the savings into technological advances necessary to deliver strong online service and security, and using the rest to prop up bottom lines in an era of modest revenue growth.

The SNL analysis found that the U.S. banking sector finished 2015 with 92,997 branches, 1,614 fewer than a year earlier. It extended a continuous branch reduction trend that dates to 2009 and that many industry observers expect will continue this year and beyond.

"There is cost cutting, but I think it is also that the banks are seeing a real shift in how customers want to bank and they are adjusting accordingly," John Boulware, a bank adviser for The Todd Organization, told SNL. "It's a response to what is happening because of technology and the conveniences that customers get out of it."

Boulware said the trends of more online banking and fewer branches are likely to continue for years to come.

"Most people can do a lot of their business online, and that's how they like it," he said. "So the banks are going to have to keep responding to what customers want." 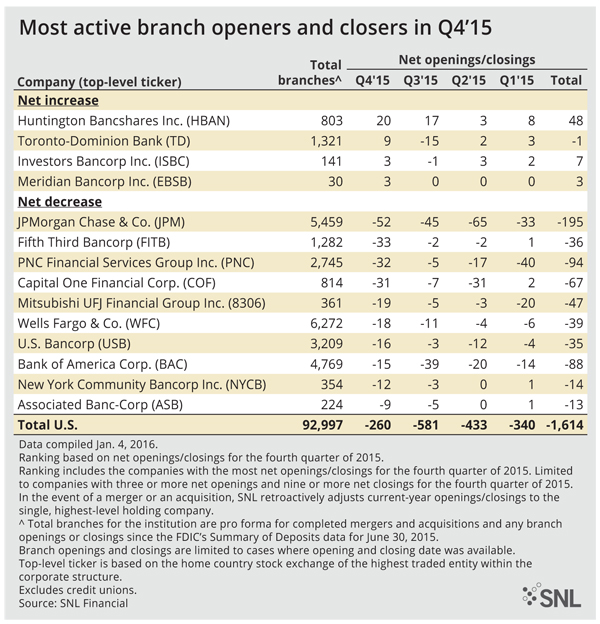 In 2015, JPMorgan Chase & Co. cut more locations than any other company during the year—195. Several other prominent banks were also highly active on this front, including PNC Financial Services Group Inc., Bank of America Corp. and Capital One Financial Corp.

JPMorgan said after its third-quarter earnings report that, through the first nine months of 2015, expenses were down about $600 million in the bank's consumer unit alone. That was linked to a reduction in headcount of about 10,000, a cutback tied in part to the branch shrinkage.

JPMorgan CFO Marianne Lake said at the time that the bank expected to continue bringing down such costs in 2017 and 2018. But the bank also has emphasized that it is investing significantly in its online offerings and in cybersecurity in response to mounting demand from its customers to do more banking via digital channels.

"Because the technology keeps getting better, it keeps making more and more sense to service customers online," Mark Fitzgibbon, head of research at Sandler O'Neill & Partners, told SNL. "And with this greater adoption of online and mobile, the long-term trend in branch declines will likely continue."

Mergers and acquisitions, too, have and continue to contribute to the trend. Bank buyers often look to close overlapping branches after a deal in order to take out costs and bolster the profitability of an acquisition.

With regulatory costs running high and pressuring more banks to sell, observers expects that consolidation in the bank space will continue at a steady pace this year. An SNL analysis this month found 281 deal announcements in the banking sector in 2015, following 287 the year before. 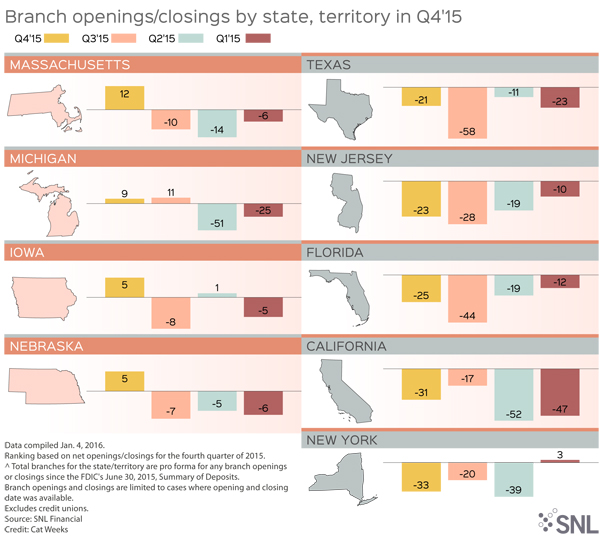 All of that noted, there are exceptions to the rule. Huntington Bancshares Inc., for one, grew its branch network over the course of 2015 by 48 locations, leading the industry.

Early in the year, it announced plans to open dozens of branches in Michigan Meijer stores. It took over 37 branches inside the Meijer stores from JPMorgan and opened several more in-store branches.

Huntington Chairman, President, and CEO Steve Steinour said at a conference late in 2015 that the bank views branches as a one important leg in a multi-pronged strategy that involves both online and physical branch options.

It "is designed to provide customers both the technology and convenience they're increasingly demanding, in addition to traditional options such as our phone bank and branches," he said, according to a transcript. "It's not a strategy of one over the other. It's all of the above."

He said that while digital platforms have become the preferred routes for daily banking business, "the traditional branch remains the preferred method" for many customers when opening new accounts or finalizing details on certain loans, keeping the physical location important. 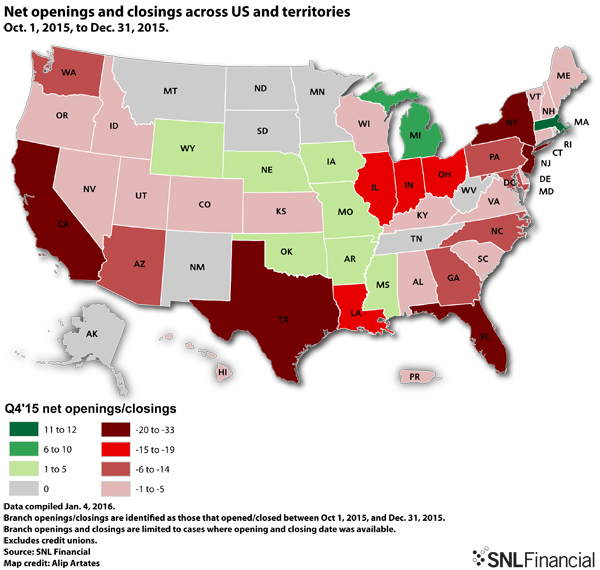 Not quite an endangered species

JPMorgan and others that have downsized have emphasized that branches are not headed for extinction. They agree that customers still want physical locations to handle certain transactions and deals. Branches also function as important billboards for banks in high-traffic areas and growth neighborhoods.

What's more, as Sandler's Fitzgibbon pointed out, competition for deposits could begin to simmer as 2016 wears on. Federal Reserve policymakers raised interest rates in December of last year and indicated that additional hikes were on the table for 2016. If more rate increases do indeed lie ahead, Fitzgibbon said more banks will want every tool at their disposal, including branches, to attract the attention of customers and make it easy for them to open deposit accounts. That is because as rates rise, more customers are likely to shop around for the best deals.

That does not mean Fitzgibbon thinks the branch reduction trend will get derailed. The technology forces are too strong for that to happen. "In aggregate, the numbers will continue to go down," he said, "but I think the pace could slow a bit." 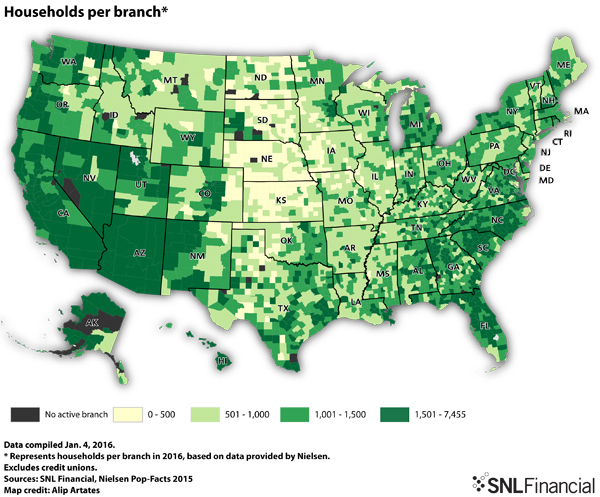