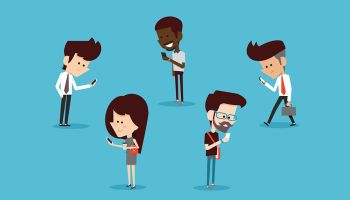 Increasing ownership of smartphones and the desire for convenience are driving consumers toward mobile transactions. A new Federal Reserve study takes an exhaustive look at trends.

More and more consumers are using mobile banking services and that trend is likely to continue, according to a Federal Reserve Board report released last week.

Consumers and Mobile Financial Services 2016 indicates that demand for mobile banking services will rise as the number of smartphone users increases and as more financial institutions offer mobile banking. 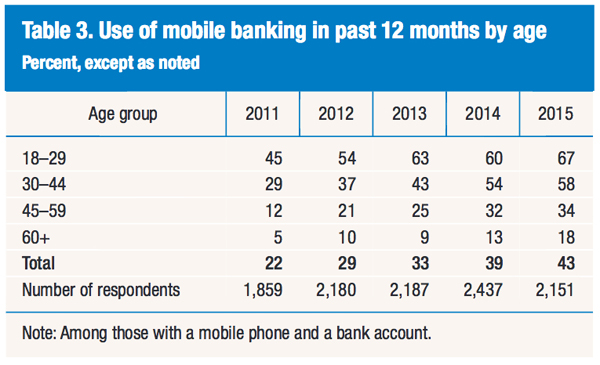 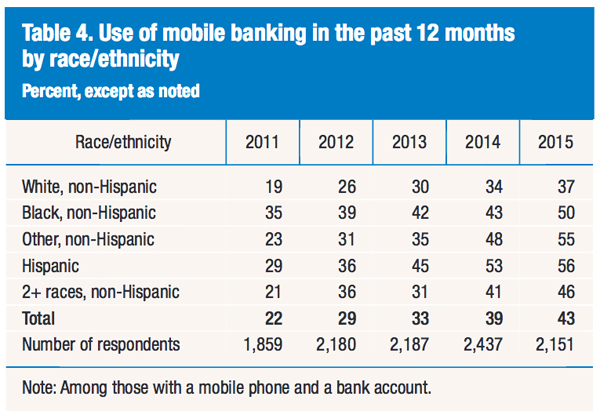 The key findings of this fifth annual survey, conducted in November 2015, offer financial services providers a view of present and likely future customer demand for mobile services. The report also highlights how consumers are increasingly using smartphones to inform their financial decisions. Security concerns continue to be an issue for many of the 2,500 survey respondents.

Ownership of a smartphone and the desire for convenience are driving consumers toward mobile transactions. The tasks most commonly performed by mobile banking users continue to be checking account balances, transferring funds, and receiving alerts.

The most common mobile payments activities—paying bills; making online purchases of physical items or digital content; and paying for something in a store using a mobile phone—were little changed from the previous year’s survey.

Although demand for mobile banking services is on the upswing, some bank customers are resisting this trend:

• Of those consumers who had no interest in using mobile banking, 88% indicated their banking needs were being met without the use of mobile banking.

• Similarly, 80% of non-mobile-payment users indicated that they find it easier to pay with cash or credit/debit cards.

Concern about the security of the technology was a commonly cited reason for not using mobile banking or mobile payments (73% and 67%, respectively, among non-users). 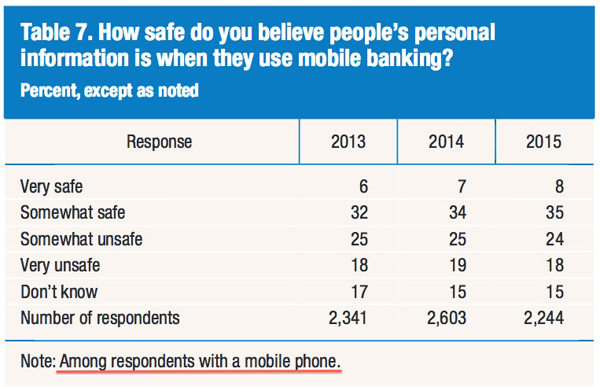 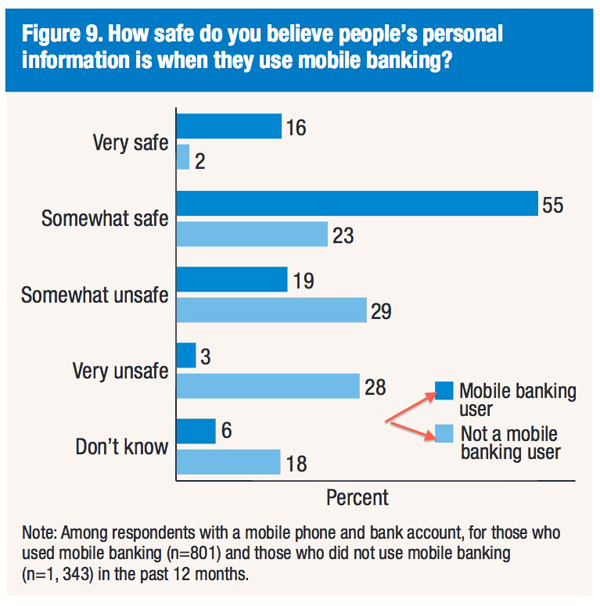 Would offering rewards be a game changer?

Interestingly, a significant number of mobile users indicated they would like to receive discounts, coupons, and promotions or to be able to track rewards and loyalty points on their smartphones.

This finding suggests that tying these services to a mobile payment service may increase the attractiveness of mobile phones as a means of payment.

“As smartphones become more common and more versatile, they can play an increasingly large role in the interactions between consumers and financial service providers, retailers, and other businesses,” the report states. “The near-constant presence of mobile phones in consumers’ lives also makes them a potentially useful tool for the delivery of just-in-time financial information or as an aid in decision-making.”

The growing popularity of smartphones among minorities, low-income individuals, and young people may help banks and credit unions to widen their customer base by appealing to underserved populations.

Among the underbanked with mobile phones, 55% reported using mobile banking. 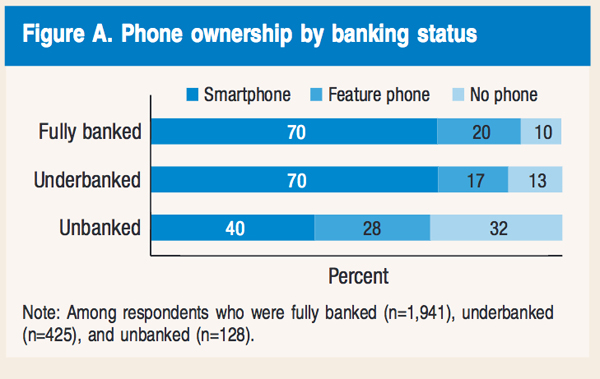 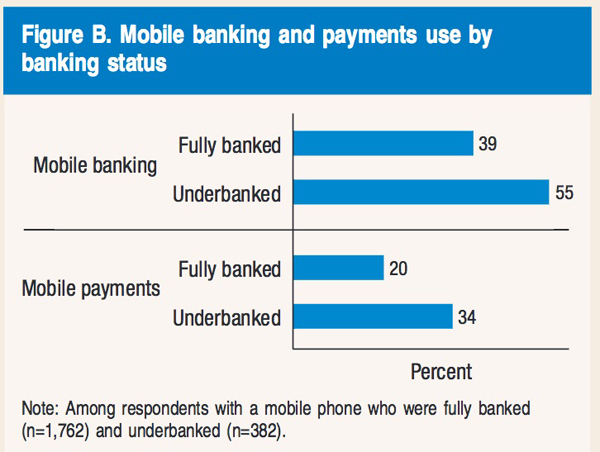 The report warns, however, that “consumers will need to understand and weigh the perceived benefits and potential risks to their security and privacy presented by the use of this evolving technology.”

A thought-provoking finding for banks is that consumers use their smartphones to inform financial decisions.

When their bank sends them an alert about a low balance, for example, customers take action.

Before making a large purchase in the 12 months prior to the survey, 62% of mobile banking users checked their account balance on their phone.

Indeed, half of them decided not to purchase an item as a result of their account balance or credit limit. Those making purchases shopped smarter: 41% used their phone to browse product reviews or obtain product information while shopping at a retail store.

And 79% changed the item they purchased based on this information.

Most consumers with bank accounts reported using a mix of online and offline channels to interact with their bank. Use of the mobile channel appears to complement mobile users’ use of other banking channels.

For survey respondents with bank accounts, more used mobile banking than telephone banking, but those user numbers were lower than the shares that have: 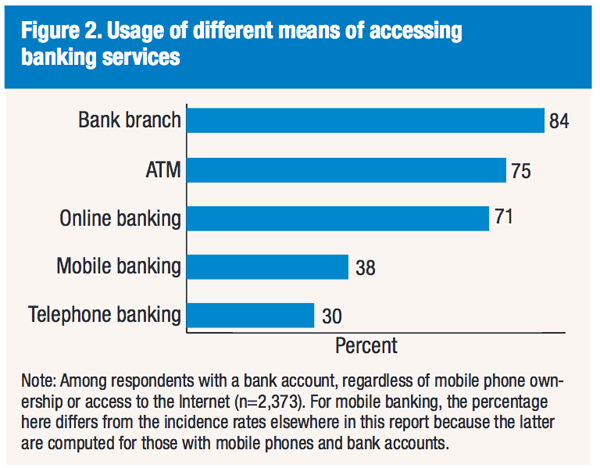 Among mobile banking users with smartphones, 54% cited the mobile channel as one of the three most important ways they interact with their bank, below the shares that cited online (65%) and ATM (62%), but above the share that cited a teller at a branch (51%).

The report concludes that as smartphones continue to evolve and grow in popularity they can play an increasingly large role in the interactions between consumers and financial service providers, retailers, and other businesses. They will potentially be a useful tool for the delivery of just-in-time financial information and financial decision making. They also have the potential to empower consumers and expand access to financial services for underserved populations. 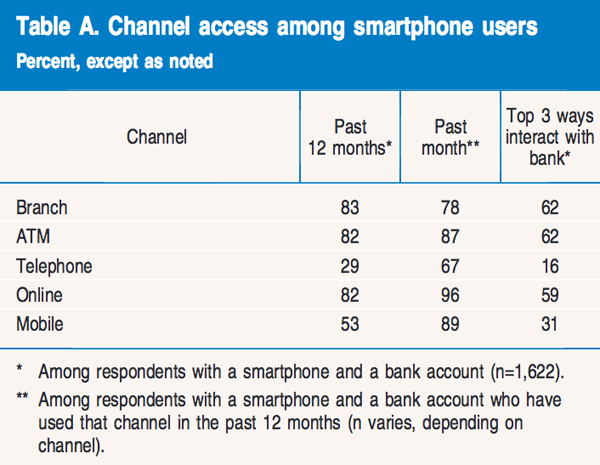 Watch a Fed video about the survey