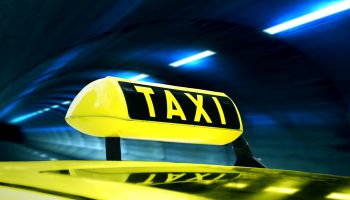 As the taxi business struggles to stabilize amid the market disruption wrought by Uber and Lyft, bankers with exposure to the medallion lending business are warning of further potential stress for their borrowers.

Bankers have—not surprisingly—publicly backed the long-term prospects of their medallion borrowers and argued that they will make changes and find a new equilibrium level of market share that ensures their long-run survival. But various disclosures have revealed that many of those banks fear more stress and potential losses as Uber and its ilk continue to disrupt the city taxi market and strengthen their foothold.

"This is the portion of our loan portfolio that we keep the closest eye on, for obvious reasons," BankUnited Inc. COO Rajinder Singh said during the company's Jan. 21 fourth-quarter 2015 earnings conference call. The bank reported medallion loans totaling $212 million at the end of 2015, which was the second-highest total among banks with disclosed concentrations in the New York area. Singh added during the call that after a detailed review of its credits the company classified about $78 million of its portfolio as substandard, bringing the total of substandard classified medallion loans to $80 million; delinquencies were about $7.9 million in the portfolio.

BankUnited Chairman, President, and CEO John Kanas said in an interview that the company had yet to see significant deterioration in the portfolio overall.

"The performance of our loans have been quite good, actually. Out of $212 million we only have $2 million worth of loans that are past due," Kanas said. "So we're feeling like that portfolio will work its way out over the next few years as valuations of these medallions become more obvious," he added.

After a decline in medallion transactions some recent sales have pegged medallions in the New York area at about $700,000, a valuation that some believe reflects a normalized value, according to Kanas. "If that turns out to be true, our portfolio will perform quite well over time," he said.

Most of the substandard classified loans were related to medallion valuation, but those borrowers have continued to pay as agreed, Kanas said.

In its Form 10-K disclosure, though, the bank warned that the risk of additional stress and potential classification extended to the rest of its medallion portfolio.

BankUnited has set aside reserves representing about 5% of that medallion portfolio, and Kanas said it was unlikely the bank would add more to those medallion-allocated reserves in 2016. "By putting that much in reserve, we think that's more than enough to cover any long-term losses we might have in that portfolio based on their performance to date," Kanas said. 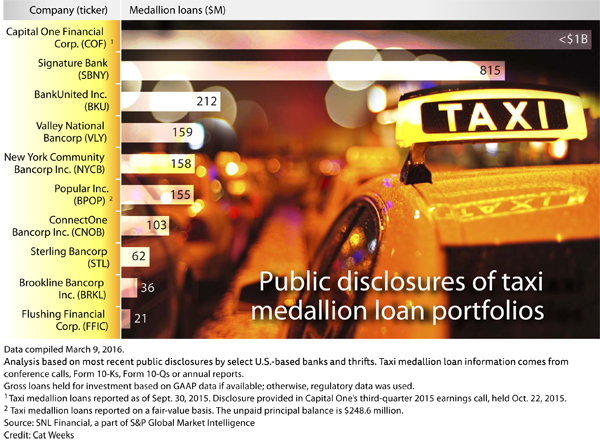 Those problems have been particularly pronounced in the bank's Chicago medallion loans. Signature's Eric Howell, executive vice-president of corporate and business development, said during a public appearance in February that the Chicago market was far less regulated—calling it the "Wild West"—and that the bank faced workout situations in that market. It had previously announced that it would restructure about $120 million of its medallion holdings in the Chicago area.

Changes in the New York market will play out differently, he argued. The taxi industry is highly regulated in New York, and those regulators are pushing through changes to help the industry cope better with the disruption. He said regulators in the city are "supportive of the medallions."

"We see, really, values leveling off, their cash flows leveling off. Could we see further declines? Yes, but we're not seeing a fall from the cliff," Howell added at the time.

New York yellow may be greener

Others have also argued that they still see the taxi medallion business model as one with a viable future in New York. In a Jan. 11 note, Keefe Bruyette & Woods Inc. analyst Collyn Gilbert summed up a call that included Medallion Financial Corp. President Andrew Murstein; ConnectOne Bancorp Inc. Chairman and CEO Frank Sorrentino; and Matthew Daus, the former Chairman of the NYC Taxi and Limousine Commission. "Perhaps not surprisingly the tone of the call was positively biased as it related to the outlook for the taxi industry," Gilbert wrote, though she said the participants were "mindful" of the near- and long-term challenges facing the industry.

Gilbert added that the "massive transition" in the taxi transportation meant additional financial stress "could be on the horizon," though the taxi industry and its backers believe that "operationally, the environment is on a path of improvement."

Kanas also pointed to the fact that more than 95% of BankUnited's medallion loans are in the New York market as a reason for optimism. He said that rule changes at Uber and other moves by taxi regulators in the city have already helped to pull some drivers from Uber back into the ranks of yellow-cab drivers.

"A lot of the fleet owners are feeling better these days about the long-term prospects of the industry," he said. 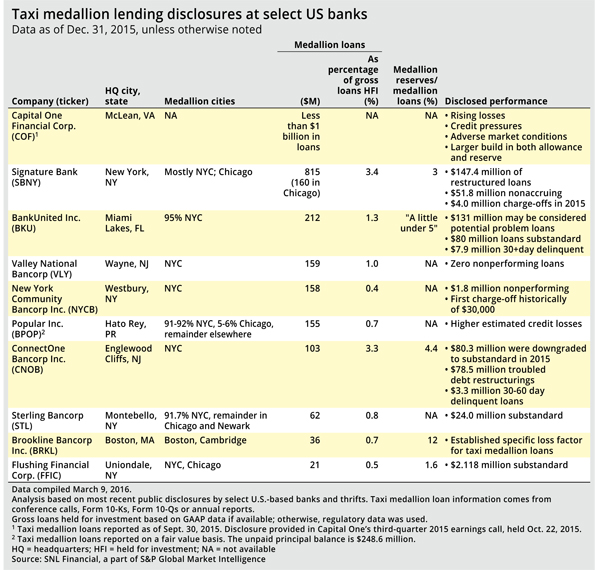 Despite those hopes, the near-term pressure on the taxi industry is unlikely to abate soon, according to Uber and tech analyst Jan Dawson of Jackdaw Research. He said the New York transportation market has always been competitive and rich with options, and Uber and Lyft will increasingly replace taxi rides in many situations where they had previously been the primary, or only, option—during a city downpour, for example.

"Uber and Lyft have come in and shaved away … the scenarios under which cabs are the best fit," Dawson said.

The intense competition for market share will continue as long as Uber follows its traditional strategy in the early part of its entrance into new markets. It wins market share by undercutting its traditional competitors' prices—and any market stabilization is likely to occur only when Uber shifts into its next typical strategy phase and begins lifting its own prices.

"At some point Uber has to raise prices to be profitable in these different markets, so a lot depends on the timing of those moves and how aggressive Uber is in trying to drive market-share gains," Dawson said.

This article originally appeared on SNL Financial’s website under the title, "Bankers hopeful but bracing for more stress in taxi medallion space"