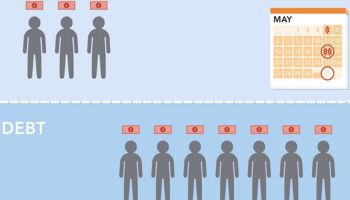 The bureau is going after payday lenders. Outreach to consumers includes a video, sampled above.

The Consumer Financial Protection Bureau took aim at payday lenders with a proposed rule that would require them to take steps to make sure consumers have the ability to repay their loans.

CFPB “is proposing strong protections aimed at ending payday debt traps,” said Director Richard Cordray in announcing the proposal. “Too many borrowers seeking a short-term cash fix are saddled with loans they cannot afford and sink into long-term debt.”

Reaction to the proposal from consumer groups and financial institution associations alike range from mixed to disappointed.

“The bureau continues to miss the mark for millions of Americans struggling to make ends meet and effectively forces most banks to stay on the sidelines due to greater compliance burdens. Consumers across the country will now turn to pawnshops, offshore lending, and fly-by-night entities that will be more costly to them,” said Richard Hunt, president, Consumer Bankers Association.

The Independent Community Bankers of America, in a statement, said in part: “We continue to strongly urge that the rule include meaningful options for reliable lenders whose personal loans exhibit lower-risk situations and excellent performance.”

ICBA added that “the rule must allow community banks to continue to have the flexibility to provide access to small-dollar credit, free of numerical and costly requirements in the underwriting process.”

Virginia O’Neill, senior vice-president of the American Bankers Association Center for Regulatory Compliance, said in a statement that the “proposal, along with past regulatory actions, will make it challenging for banks to meet the needs of the estimated 50 million consumers who access a variety of bank and nonbank small-dollar lending products each year. While the bureau has frequently expressed interest in expanding banks’ trusted role in this market, the proposal fails to do so in a meaningful way and will significantly limit the availability of small-dollar credit.”

Meanwhile, reaction from consumer groups makes it clear that while they are optimistic about the proposal, it needs further strengthening.

“The proposed rule … is the best chance consumers have at avoiding further harm caused by payday and car title loans,” says Tom Feltner, director of financial services at the Consumer Federation of America. “Getting this rule right means requiring lenders to fully consider a borrower’s income and expenses and make a fair determination that, at the end of the month, there is enough money left to pay living expenses and loan payments without hardship or re-borrowing with additional interest.”

Still, a number of consumer groups expressed serious concern during a telephone press conference, chief among them were what several described as “loopholes.” Feltner summarized the concerns this way:

• Ability to pay standard. “The first and primary concern that we have is that the CFPB is not applying that strong ability-to-repay standard … to all types of short- and long-term loans. There is a carve-out that would allow up to six loans made with no consideration of a borrower’s ability to repay.”

• All-around protection. “We are also looking at the interaction between long- and short-term loans … We want to make sure that there are strong protections in place to prevent flipping back and forth between loans with stronger and weaker protections that will ultimately result in lenders being able to game that system.”

During the press call, Kerry Smith of Community Legal Services of Philadelphia emphasized that the CFPB proposed rule would not pre-empt stronger lending standards implemented by individual states’ laws. Pennsylvania, she noted, along with a number of other states, puts a cap on the interest rate and fees that are charged to borrowers.

What CFPB proposal would do

CFPB offered a summary of protections contained in its 1,334-page rule proposal:

• Full-payment test—Lenders would be required to determine whether the borrower can afford the full amount of each payment when it’s due and still meet basic living expenses and major financial obligations.

For short-term loans and installment loans with a balloon payment, full payment means affording the total loan amount and all the fees and finance charges without having to reborrow within the next 30 days.

For payday and auto title installment loans without a balloon payment, full payment means affording all of the payments when due.

Lenders would also be barred from taking an auto title as collateral.

One option would be to offer loans that generally meet the parameters of the National Credit Union Administration’s “payday alternative loans” program. In that effort, interest rates are capped at 28% and the application fee is no more than $20.

The other option would be offering loans that are payable in roughly equal payments with terms not to exceed two years and with an all-in cost of 36% or less, not including a reasonable origination fee, so long as the lender’s projected default rate on these loans is 5% or less.

• Debit attempt cutoff—Lenders would have to give consumers written notice before attempting to debit the consumer’s account to collect payment for any loan covered by the proposed rule. After two straight unsuccessful attempts, the lender would be prohibited from debiting the account again unless the lender gets a new and specific authorization from the borrower.

CFPB will receive comments on its proposal through Sept. 14.