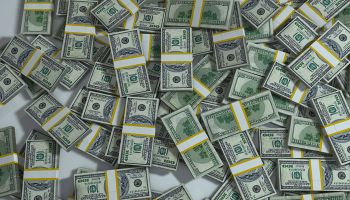 Some banks have built term funding to attract new customers and lock in funding costs while they remain low.

While short-term interest rates have begun to creep up and could increase further this year, most banks have worked to shrink term funding on their balance sheets. Many banks are decreasing CDs as a portion of their balance sheets while rates remain low, but some institutions are employing strategies they believe will help grow their customer bases while limiting increases in deposit costs if interest rates increase further. 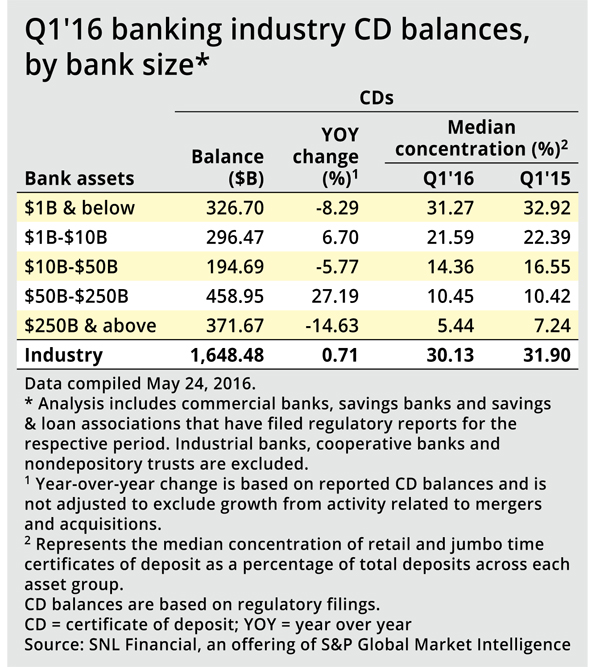 Not a common strategy industrywide

The decline was consistent across banks of all sizes, except among those with assets ranging from $50 billion to $250 billion, where CDs inched up to a median 10.45% of deposits from 10.42% one year ago.

The year-over-year increase in that asset group was primarily due to M&T Bank Corp.'s acquisition of Hudson City. When the deal closed, the target had $35.1 billion in assets and far higher CD balances than M&T. After the transaction, M&T saw CDs grow to 14.26% of its deposits from 3.83% in the quarter before completing the acquisition.

The sizable increase in CDs caused M&T's cost of funds to increase in the period as well, but the company said it plans to maintain pricing on Hudson City's time deposits, at least for the time being.

Farming the deposit side

Other banks saw notable growth in their CD balances as they worked to grow their deposit bases.

Geoffrey Greenwade, president of Green Bancorp Inc., said at the Gulf South Bank conference in early May that the company has some bankers focused purely on growing deposits. He said Green Bancorp's portfolio bankers will not get paid for the loan growth they generate if they do not hit at least half of their deposit growth goal. He further said the company is running weekly advertisements in newspapers, while increasing direct mail to customers and businesses in its footprint.

Green Bancorp reported the fifth-largest year-over-year growth in CDs in an S&P Global Market Intelligence analysis, which included institutions with more than $1 billion in assets, CD balances of more than $100 million and loan-to-deposit ratios in excess of 50%. Institutions that have not disclosed current rates for three-month, one-year and three-year CDs were excluded from the analysis. 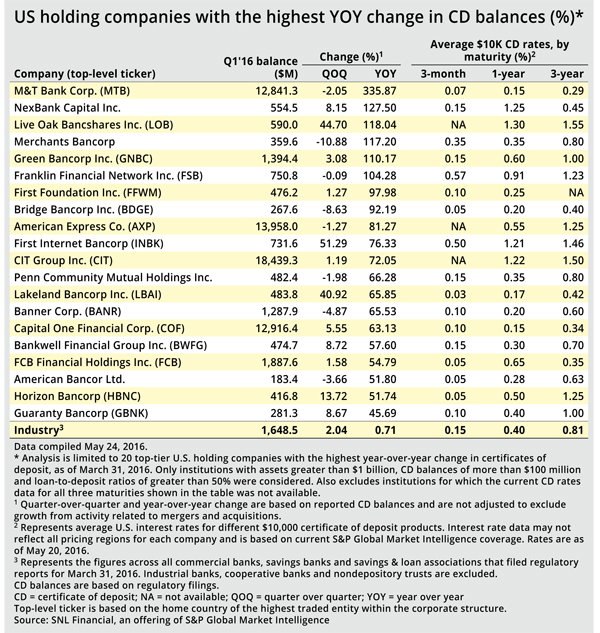 Other institutions have actively worked to increase CD balances to attract new customers. TCF Financial Corp. has targeted growth in CDs through promotional campaigns. While the growth in CDs has increased TCF's overall cost of deposits, the company believes growing CDs provides longer-term value because more than 80% of promotional CD customers also utilize other products at the bank.

Some banks saw CDs as a tool to improve their liquidity and lock in funding for longer periods. First Internet Bancorp ranked among the top 20 growers of CDs over the last year, adding $255 million in new CD balances in the first quarter. The company said the additions enhanced liquidity and asset/liability management and noted that most of the new CDs had longer duration, coming in at a weighted average term of approximately 38 months.

Across the industry, the cost of CDs at various maturities, and among different-sized banks, has not changed that much over the last six months since the Federal Reserve finally raised short-term rates in mid-December 2015. SNL data shows that the cost of CDs rose 1 to 2 basis points at most on CDs of varying maturities between Dec. 11, 2015, and May 20, 2016.

Some bankers have said in recent months that they raised rates on certain deposit products to offer customers some much-desired yield, but those increases often came on money market accounts. For instance, Signature Bank's cost of money market accounts rose 2 basis points in the quarter due to "selective increases" to certain deposit clients as a result of the Fed rate hike, management said during the company's first-quarter earnings call.

Southside Bancshares Inc. made a similar concession. Southside President Lee Gibson III said at the Gulf South conference that the company increased interest on money market accounts by 5 to 6 basis points in the quarter because the bank felt it "owed" customers. Gibson said the company does not expect much pressure on deposit costs coming from any further rate increases.

This article originally appeared on SNL Financial’s website under the title, "Some banks offer promotional CDs to lure customers, lock in today's rates"