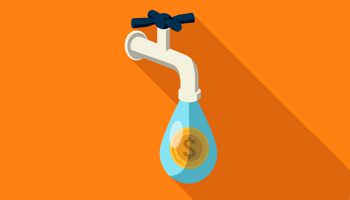 Executives at Loris, S.C.-based HCSB Financial Corp. and unit Horry County State Bank are working to turn around the institution. One of those steps will be reducing the certificates of deposits that came from listing service websites. Listing service CDs share some similarities with brokered CDs, including their high-rate and nonlocal nature, but do not face the same regulatory prohibitions as brokered deposits, which are prohibited from being acquired by troubled banks. 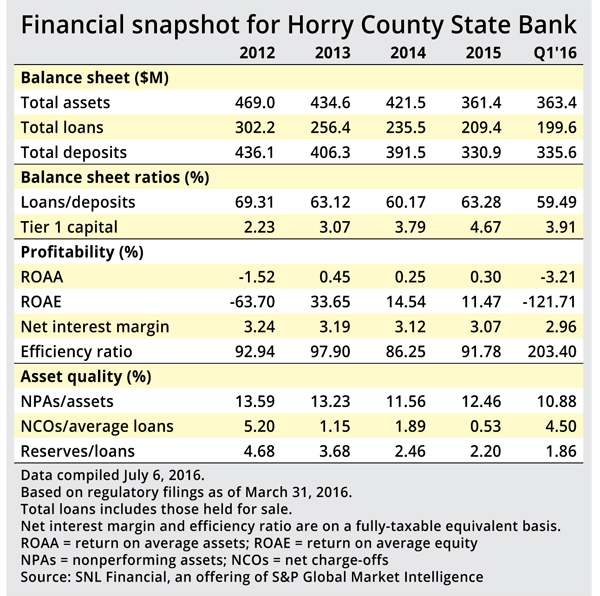 Horry County's troubles stemmed from a combination of rapid growth, bad timing, and expensive funding sources, said CEO Janet Hollar. Horry fueled rapid growth between 2007 and 2009 and replenished its capital with a mix of funds consisting of subordinated debt and TARP but ran into financial stress that resulted in a 2011 cease and desist order prohibiting it from accepting, renewing, or rolling over brokered deposits.

QwickRate declined to comment directly on the subject matter and referred to listing service deposit resources from the FDIC. National CD Rateline, another popular listing service website, did not return calls seeking comment.

The FDIC defines a listing service as a company that compiles information about CD interest rates, whereas a deposit broker actually "facilitates" the placing of a deposit, according to a 2004 Advisory Opinion authored by agency counsel Christopher Hencke. The FDIC can prohibit undercapitalized banks from accepting, renewing, or rolling over brokered deposits, including CDs. But there are no such prohibitions on accepting nonlocal CDs from listing services, which also count as core deposits for regulatory purposes. Listing service deposits have been found in relatively high concentrations at failed banks in recent years since the FDIC began requiring banks to report concentrations on call reports in 2011.

Regulators have noted that listing service deposits may be an unstable source of funding for banks; they allow banks to acquire a high amount and volume of deposits "simply by increasing interest rates," according to a 2011 FDIC Study on Core Deposits mandated by the Dodd-Frank Act. The study said examiners have viewed them as "potentially more volatile" than local deposits.

"The analysis also suggests that high rate deposits and non-brokered listing services appeared likely to pose problems similar to most brokered deposits," the regulator's study stated. At time of publication, there was not enough evidence to undertake a statistical analysis of listing service deposit data; the regulator has not done a study on the issue since or considered updating the treatment or approach to these deposits. 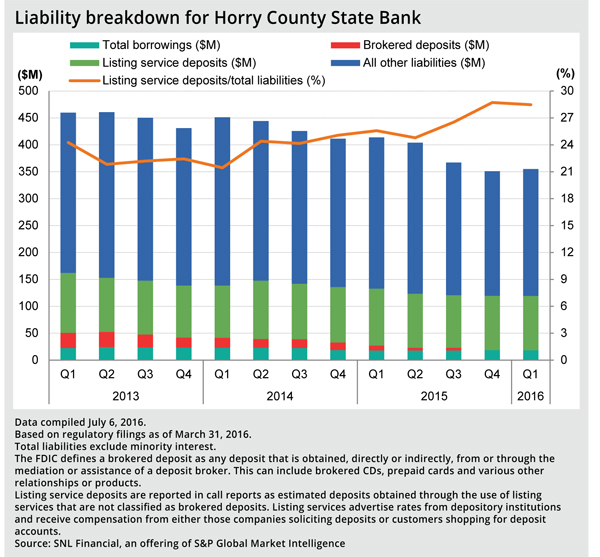 Listing service deposits make up a small part of the total deposit market. They represented a median of 3.96% of the banking industry's deposits and declined nearly 9% in aggregate from year-ago levels.

But they are more common among undercapitalized banks. An S&P Global Market Intelligence analysis found that of 27 undercapitalized banks, 13 reported concentrations of listing service deposits that exceeded 10%. These banks are excluded from the brokered deposit marketplace; only well-capitalized banks can accept those funds without regulatory restrictions, said Paul Clark, a partner at Seward & Kissel LLP who represents the brokerage industry. A bank that is experiencing asset problems may also benefit from the deposits counting as core for regulatory purposes, but Clark disputed that they behave like other core funds that are normally "very stable" because of relationships between the customer and bank.

"If you have to go into the marketplace and bid up the rate to get it from people you don't know or otherwise have a relationship with, it does raise a question of how stable it really is," he said.

Listing service deposits staved off a liquidity crisis at Horry County even as it faced serious asset-quality issues, with nonperformers exceeding 10% of assets since 2011. Listing service deposits made up 30.12% of total deposits at the end of the first quarter. Shortly after that, the bank conducted a $2.3 million capital raise and hired Hollar as CEO. Horry County's Tier 1 risk-based ratio was 3.91% and its overall risk-based capital ratio was 5.17% at the end of the first quarter.

For her part, Hollar recommended that any bank nearing a troubled situation or liquidity crisis utilize listing service deposits, but she said the funds will play a much-reduced role as Horry County moves toward financial health. She said listing service deposits and brokered deposits should never make up more than 10% of total deposits. The deposits are more expensive than a local deposit, and she said Horry County needs to be focused on servicing its surrounding community and hopes the recap will restore local depositors' confidence in the bank. 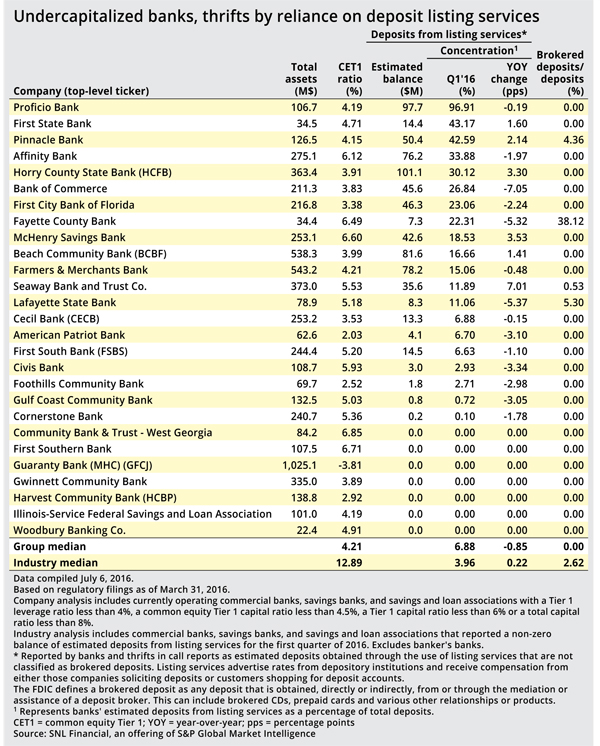 This article originally appeared on SNL Financial’s website under the title, "How a troubled bank used listing service deposits to avoid failure"