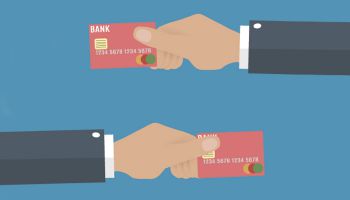 Cash hasn’t been king for a long time, and its cost continues to rise amidst strong growth in global non-cash payments.

Capgemini’s 2016 World Payments Report found that global non-cash payments volumes grew by a record 8.9% during 2014, reaching $387.3 billion. That is the largest year-over-year volume increase since Capgemini began publishing the report 12 years ago. 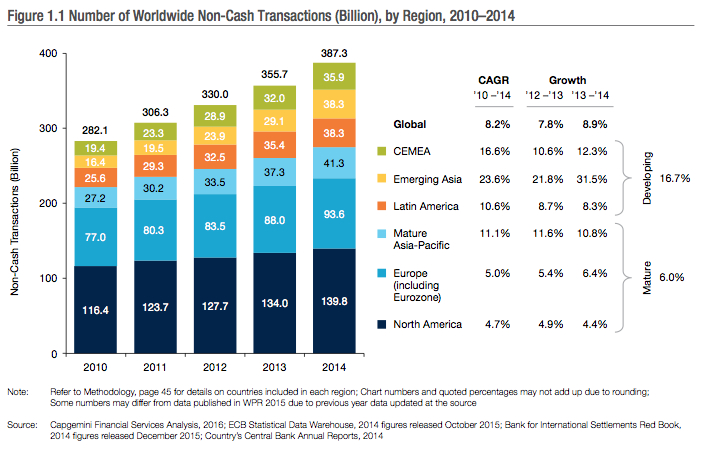 The research attributes the rapid growth in noncash payments to:

• Developing markets, which experienced a 167% increase in noncash payments in 2014. Mature markets’ noncash payments grew by just 6%, but those markets account for almost 71% of total global payment volumes.

• Improved security measures such as EMV (Europay, Master Card and Visa) and biometrics.

• Government incentives encouraging electronic payments in developing markets, as the cost of cash continues to rise.

The report also indicates that overall transaction banking revenue is under pressure from a multitude of internal and external challenges. These include such factors as lower fee income and interest rates; pressure on foreign exchange rates; and corporate demand for digital payment services.

Card payments, particularly debit card payments, are rising as check use has declined consistently over the past 13 years. Immediate payment systems, where funds are made available to payees within seconds, are a potential alternative to checks and cash for retail and corporate customers.

Capgemini’s James Methe, principal of payments and transaction banking, says in an interview with Banking Exchange that instant payments will decrease the use of checks over time. Currently the U.S. accounts for about half of the global volume of checks.

“It’s something that is ingrained in a lot of corporations,” Methe says. “Checks have been predicted to be dinosaurs for a long time, but they’re still out there.”

While check use will never disappear completely, Methe says that in time they will represent about 4% of global volume—compared to 11% today and 20% in four years.

In Europe, use of checks varies from country to country, with the United Kingdom and France writing the most checks. In some countries, such as Sweden, checks are used infrequently and some shops will not accept them, according to BNP Paribas’s Jan Dirk van Beusekom, executive director, Advisory & Strategic Marketing Cash Management, in an interview.

Regulatory complexity remains a critical challenge as institutions comply with existing regulations and new regulatory initiatives, some of which affect established business models.

There have been 33 new payments-related regulatory initiatives since the last report, according to Methe, split 50-50 between prescriptive and open-ended regulations.

“The prescriptive ones are pretty easy,” says Methe, adding that many banks believe they are “ahead of the curve” on those regulations.

However, he added, that open-ended initiatives coming down the road, such as the European Union’s Payment Services Directive II (PSD II) and those governing virtual currency, cause many banks to fear they will fall behind next year.

“The U.S. banks we spoke to are confident that they’ll been able to catch up,” says Methe.

BNP’s van Beusekom says banks understand they need a very strong and holistic approach to compliance, but they have made little progress in developing such an approach over the past two years.

“Execution is a challenge for many; It’s not so easy to keep up the pace,” van Beusekom says, noting that an overall view of their efforts is critical.

To develop that view, van Beusekom explains, “Banks should keep the organization’s compliance structure as simple as possible. Do not organize it department by department.”

Van Beusekom adds that staff training is also important: “Make sure everyone in the organization is following the same basic guidelines. We build a lot of automatic controls into the system, but in the end it comes down to people.”

The expectations of corporate treasurers are evolving, creating both challenges and opportunities for banks, the survey found. In addition to payment processing, corporate treasurers now want their financial institutions to provide digitized support for account management, data analytics, compliance tracking, and fraud detection and prevention. 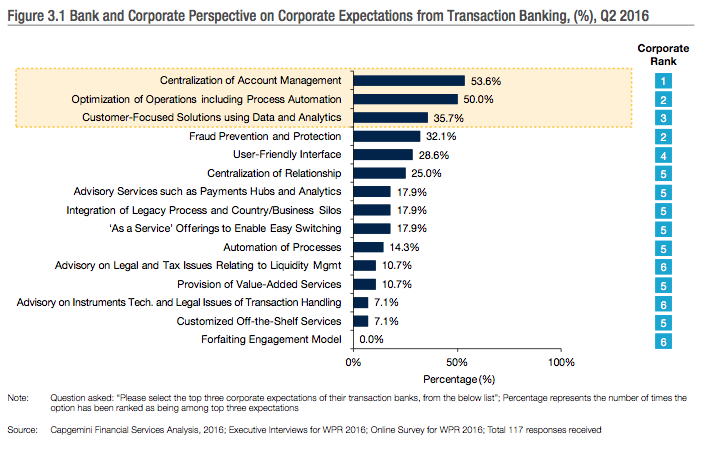 To meet these customer expectations in this digitized transaction banking environment, institutions are recognizing the need to increase their digital maturity through fintech partnerships.

Methe says that banks have initiated new digitized programs over the past few years, resulting in a near one-to-one correlation between services customers want and what banks are now offering.

“The response from banks is much faster than it was even a few years ago,” Methe observes.

Banks’ relationships with fintechs are evolving as well. Once considered disrupters, fintechs are now considered more as partners for innovation than competitors, both van Beusekom and Methe believe.

In the previous study, they were viewed as more competitive, but this year’s study indicates that banks view their relationships with fintechs “as a perfect synergy,” largely because banks want to take advantage of fintechs’ greater insight into the user experience.

Today all major banks have dedicated innovation departments, which is where the digitization budgets are concentrated. Banks not only partner with fintechs, they invest in them, directly or through consortia.

“The whole mindset is more open and collaborative than ever before, said van Beusekom. Banks even invest in some fintech startups, added Methe.

Indeed, cooperation with old-fashioned competition appears to be more likely today as well.

The report indicates that there is more interbank cooperation today, particularly on initiatives in the areas of cybercrime and fraud. Banks used to keep incidents of fraud secret, but as fraud attempts affect all institutions, banks find it helpful to cooperate.

Looking ahead to next year’s report, Methe and van Beusekom expect the corporate side of the global payments story to continue with information about block chain initiatives and the growth of noncash transactions, and application program interfaces. 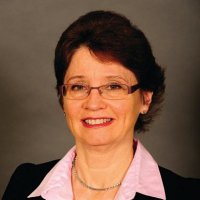