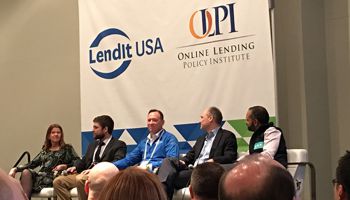 About the only point of unanimity about the fintech charter proposal of the Comptroller’s Office is that it comes at a time when more clarity about innovation is necessary in financial regulation.

During a session at this week’s LendIt USA conference in New York City March 6-7, a panel debated the proposal made late last year as a subset of the national bank regulator’s push to address innovation in financial services. Beyond the charter proposal a notable step was establishment of an innovation office at OCC.

“OCC’s effort is an exercise in regulatory courage,” in the face of heat that was predictable, said Jo Ann Barefoot, head of Barefoot Innovation Group and a veteran regulatory consultant and regulator.

The OCC proposal drew over 100 comment letters after its release, with analysis of the input continuing at the agency currently. [In a separate speech and public Q&A Comptroller Thomas Curry gave a significant update on the pending matter.] Comments often ran long and detailed and opposition became evident from multiple quarters, including state regulators and the Independent Community Bankers of America.

“On the job learning” essential

Barefoot pointed out that many of the nation’s most innovative financial providers are nonbanks, and they work mostly outside of the current regulatory sphere. She said that this posed a risk to the national economy and that she expects such activity to eventually come under federal regulatory authority.

“In the U.S. bank regulators don’t see fintech and innovation directly almost at all,” said Barefoot. “They don’t regulate any of the cutting-edge innovations because that’s all come from nonbanks.”

In the absence of some experience, she continued, “they aren’t going to get it right.” Barefoot believes that a new regulatory model built on more interagency functioning will be necessary to address fintech’s new wrinkles on financial services, and traditional banking’s responses to them. This comes at a time when the relations between the two fields has warmed sufficiently to see more talk of collaboration than solely competition. (Indeed, the session moderator was Gilles Gade, founder, CEO, and chairman of Cross River Bank, a N.J. bank that works with multiple fintech players.)

From the perspective of the Conference of State Bank Supervisors, the trade association of the state financial institution regulators, indeed, OCC has already gone wrong.

Matthew Lambert, CSBS policy counsel, told listeners that the Comptroller’s Office lacks the authority to create such entities as fintech charters, no matter, he said, how many times it asserts that authority.

“A very large legal question is hanging out there,” said Lambert, “and so the first to get a fintech charter will have this hanging over their head.”

Indeed, one panelist suggested that the OCC’s fintech charter will land in court at some point, and take several years to wind through the legal process before reaching some conclusion, pro or con.

Likely one for the lawyers

David Cotney, a consultant who previously was Massachusetts Commissioner of Banks for nearly six years, ending last September, said that every pre-emption issue between OCC national charters and state banking authority has wound up in litigation at some point.

This debate between regulators, and a growing one in Congress over the issue, along with the general uncertainty about the Administration’s position on fintech regulation and chartering is causing confusion and friction, according to panelist Jeffrey Meiler, CEO and founder of Marlette Funding LLC, the firm behind Best Egg online personal loans.

“The consumer will be hurt if we don’t move the ball forward,” said Meiler.

Is a fintech charter necessary?

While Meiler and others see the charter effort as imperative to moving forward, not all do.

“A bank charter is not always the answer” to structuring a financial company, said panelist Jaidev Janardana, CEO of Zopa, considered the first online peer-to-peer lending platform. “A bank should only be doing certain things,” he insisted, in light of its special status as a holder of federally insured deposits.

Panelists spoke of a general perception in the market that only a relative handful of fintech companies have the capital in hand, up front, to be able to entertain filing for a charter. The OCC proposal made it clear that capital expectations would not be softened for fintech charter applications, though they would be somewhat variable depending on the nature of the activities proposed for the entity.

“Everybody getting a bank charter would not be a doable thing,” said Barefoot. On the other hand she said she had no doubt that in time fintech players will come under banking-type regulation overall.

“And one thing we will not see is regulatory willingness to accept failure,” said Barefoot. That is one thing that separates the typical fintech mindset from the banking DNA—fintech players talk often of “fast fail” experimentation and such, which does not sound as good under a banking roof.

That said, former regulator David Cotney reflected that “community bankers would say a charter should be mandatory” to do business in financial services, something that would be vigorously debated by the fintech fraternity.

Cotney said his read of the banking industry’s attitude came from bankers’ perception that fintechs don’t have to play by the rules banks do. Some fintech figures have disputed this, pointing out, for example, that they must file for money service business licenses where applicable.

(This reporter spoke with community bankers at the recent American Bankers Association National Conference for Community Bankers about the proposed charter prior to the LendIt conference. The responses were a mixture of some puzzling indifference, some of what Cotney spoke of, and some cynicism that no matter what the rules say, clever fintech players would run circles around bank regulators. “They’ll bamboozle ‘em,” said one midwestern banker.)

Cotney said he understood the reluctance of some fintech players to submit to regulation.

“The federal regulators have rightfully earned themselves a reputation as being hostile to innovation,” he said.

The Comptroller’s effort, he continued, marks a change, though some say there is more going on behind the scenes at the other federal agencies than sometimes meets the eye.

Is the timing right?

Implementation of the fintech proposal is in the offing and not all panelists agreed with the speed the Comptroller is moving at.

Cotney noted that reading the paper raises more questions than are answered. The proposal actually ended with a baker’s dozen of questions to commenters.

“My fear,” said Cotney, “is that it is not ready for prime time.”

Is the scope right?

Another concern voiced among panelists is the “fit” of the proposal. At this point everything about the charter is theoretical and how much would be “one size fits all” worried more than one speaker.

Zopa’s Janardana said that many types and styles of fintech players exist. Even within the online lending space, multiple ways of delivering, funding, and administering such programs co-exist, and widely varied market segments are targeted

Janardana said regulators need to engage with all the different models to learn more about their operations. When they’ve done that, he said, they will see the most appropriate ways to regulate each variant.

Marlette’s Meiler indicated that forcing all fintech regulation into one form would stymie innovation. “We’re executing every day,” said Meiler. “This is about creating clarity.”

There is also a school of thought that the marketplace will ensure innovation, and that regulatory intervention is not necessary.

Said one panelist in a post-session hallway conversation: If you want proof that that can happen, look at the players who have succeeded already—companies like PayPal, Square, and Quicken.

View a video of this LendIt session