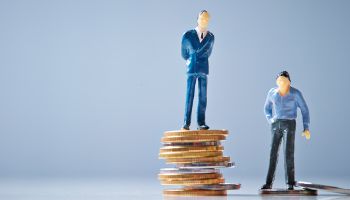 The post-recession tide did not lift all boats to the same degree, according to research by Moebs Services.

An analysis of call report data for the years 2006 through the third quarter of 2016 indicates lending by depository institutions has not returned to levels that existed before the financial crisis and the Great Recession.

“When it comes to getting a loan, consumers and small businesses still feel the impact of the Great Recession. Using the 2006 loan-to-asset ratio as a benchmark, banks are down 4.84%, thrifts are down 4.84%, and credit unions are down 3.25%,” says G. Michael Moebs, economist and CEO of the firm.

Moebs says 2006 was the high-water mark in lending by insured institutions. He notes that while some may view 2006’s levels as excessive, consumers and small businesses say it is difficult to get a loan from an insured institution now. He believes the sluggish economic growth since 2006 supports this view. 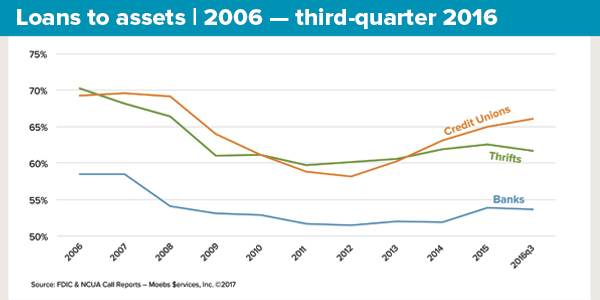 In absolute dollars, loan volume is higher for banks and credit unions for the same period, according to Moebs’ data. But he notes the increase is driven mainly by increases at the largest institutions.

In the case of the largest banks, he says, lending predominantly has been to large corporations, investment companies, and the like, where the impact on jobs and economic growth has been negligible.

Nonbank lending data was not included in the analysis, says Moebs, because that data is not readily available. The nonbank—or shadow banking—sector remains largely unregulated, he says, other than by the Federal Trade Commission. Nevertheless, Moebs maintains that nonbank lenders, including firms like Quicken Loans and its offshoot Rocket Mortgage, along with industrial banks used by auto companies, are a big factor on the consumer front.

“The shadow banking market is huge and is targeting small businesses for loans,” he says, noting that as a small business owner himself, he receives mailed promotions for loans from “at least 15-25 firms.” He believes small regional banks, community banks, and credit unions are being hurt the most by this.

Moebs attributes this disparity to the fact that institutions in the middle size ranges where there was positive loan growth “are at their economy of scale in the depository business.” They are efficient lenders, which he defines as having low noninterest loan costs (salaries, processing, etc.), fees charged for origination and maintenance, and low-cost funds.

“We’re now seeing a group of banks and thrifts who are saying, ‘Why do I need so many lenders?’” says Moebs. These institutions have seen what nonbank lenders are doing and adopted it—namely moving away from traditional underwriting methods to using decisioning software.

According to Moebs, these bankers are saying, “We don’t need people to underwrite now; software can do that. We need people to oversee the decisions and track the information.” That can be done by a small group of lenders, he observes.

Mike Moebs writes a blog, "The Prairie Economist," for BankingExchange.com