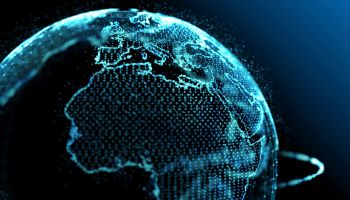 Part 1 of a series: Banking Exchange editors talk to fintech expert Chris Skinner about change in the financial services business; the need for clean data to realize the promise of new technology in banking; and why geography still matters in banking progress.

Chris Skinner is surprised when he hears that he’s popular among bankers. Surprised because the messages he delivers are often uncomfortable. And that’s no accident. Skinner intends to push bankers out of their comfort zone.

For their own good.

While never a banker himself, Skinner has worked on banking projects for several technology companies before establishing his niche as a fintech blogger (TheFinanser.com) and creator of the Financial Services Club in Europe and the U.K.

His specialty is discerning relevant chords amid all the noise regarding technology and its impact on financial services. He doesn’t deny the impact—quite the opposite—but he tends to sort out the clutter rather than add to it.

And although he doesn’t exactly predict the future, he paints pictures of what it’s likely to be, and why it will mostly be good—if you are willing to look at it without fear.

Fear can be a positive motivator, but too often it leads to denial. For example, take the ongoing revolution labeled “digitalization.” Widespread fear in some quarters holds that artificial intelligence, robotics, and other such technologies will displace all human interaction and lead to massive job losses.

Skinner believes these developments are actually very exciting and will create many new jobs.

Skinner often peppers his comments with anecdotes, and he is a student of history. This leads to this comment in response to fears of the impact of AI and robotics:

“Coca-Cola and Pepsi-Cola were invented as medicinal elixirs for relieving the stress of the industrial revolution in the Victorian age. People then were frightened of the technological progress of railroads, steamships, the telephone, electricity, and the camera. It was hellishly worrying. We look back now and laugh at that.”

He sees the digital revolution as only the latest in a long series of seismic changes, each of which led to widespread fear at the time. In the end, they produced the world we live in today.

Skinner held forth on this and several other topics in a wide-ranging two-hour discussion with Banking Exchange editors in March. This article distills a part of that conversation. Other installments will follow.

It’s difficult at the time to see where current trends will lead, Skinner noted. He related how in the course of one week earlier this year he had travelled to four continents and seven countries for various speaking engagements.

“If I had told a person 100 years ago that I could fly around the world in seven days, they would think I was a complete idiot,” said Skinner. Thus, the idea of terra-forming Mars and touring the red planet probably aren’t ridiculous at all, he said, though some may dismiss these ideas as outlandish today.

Skinner also points out that the long strings of invention that lead to surprising endpoints cannot be ignored. While having a powerful and globally connected computer in our pockets may seem like a recent development, smartphones actually were the result of 70-80 years of developments, all of which combined so we can “look up some cute cats on YouTube.” 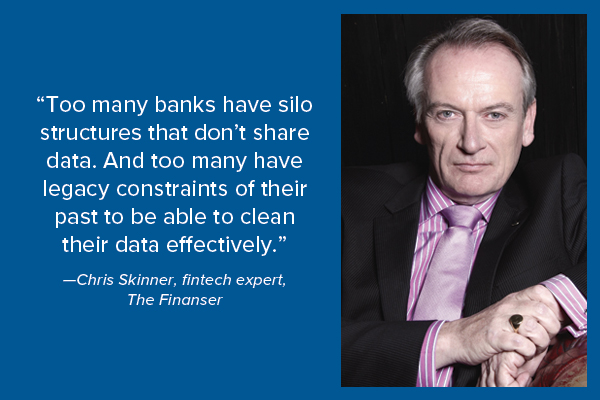 Dirty data is a drag

Having prepared his canvas with the broad strokes above, Skinner went on to address some specific trends and issues in response to questions from Banking Exchange Editor and Publisher Bill Streeter and Executive Editor and Digital Content Manger Steve Cocheo.

On the promise of AI, machine learning, robotics, et al, Skinner said developments in financial services are less advanced than in other industries. Citing data from an Economist Intelligence Unit briefing, he said banks are mostly in an early experimentation phase.

Banks would like to use these technologies, much as Amazon and Google do, “to look for patterns of behaviors to indicate certain opportunities or issues financially,” said Skinner. Right now, though, they’re not able to do that because they lack clean data.

Why is that, in a business dependent on accuracy?

The problem, according to Skinner, is that many banks have grown through mergers and acquisitions. Much must still be sorted out.

“Too many have silo structures that don’t share data,” said Skinner. “And too many have legacy constraints of their past to be able to clean their data effectively. It’s a big job.” He said he knows several big banks that have been trying to do this for the last two years—and they are still not there.

1. Getting agreement among all the different lines of business to create an enterprise data architecture.

One insight: “Bear in mind that quite a few of those lines of business have conflicting bonuses and objectives, which sharing would actually undermine.”

Skinner added that an enlightened C-suite can say, “Okay, let’s change the bonus structure and get a focus on creating this.”

And that points to the second challenge.

2. The C-suite is actually one of the problems.

Top bankers’ own knowledge of technology is not at a level that allows them to realize what the problem is.

“Most banks are led by bankers, not by technologists,” said Skinner. “Banks have all the ‘fin’ but not enough ‘tech.’ They need a balance in the boardroom. Right now it’s far too skewed toward having financial people only. Or financial people plus the token technologist—one, if you’re lucky.”

Skinner sees U.S. banks as behind the pace of the international industry.

“Jamie Dimon and company are good banking people who have made a very comfortable career out of financial management,” Skinner said. “They recognize the technology challenge because they’re leaders and CEOs. But they’re not technologists and they do not have the acumen in their C-suite to deal with it. ”

In fact, the only major banks that fit Skinner’s model of tech leadership are Spain’s BBVA and Singapore’s DBS Bank, because both of them are led by technologists.

“Francisco Gonzalez, BBVA chairman, started life as a programmer,” said Skinner. “Piyush Gupta, who leads DBS, was formerly one of the guys heavily involved in Citigroup’s Indian operations. In India you have guys who really understand the nuts and bolts of technology in banking. Because that’s what they’ve been doing for 30 years.”

Related to clean data, Skinner maintains that enterprise data storage should be in the cloud, not on in-house servers: “Because then you can deploy the data wherever it is needed, whenever it is needed and keep it cleansed. And you have the scalability to add to that in unlimited fashion.”

Once you’ve created enterprise data storing in the cloud, he continued, it becomes independent of the processes. “So you’ll never ever get into that problem again of being handcuffed by legacies.”

By contrast, presently content is “locked into your servers [because the] servers are live 24 by 7 and can never be taken down. That’s the nature of the infrastructure we built in the 1980s.” Separating content from processing, he said, could help get around that dilemma. [In an earlier interview with Banking Exchange, Skinner noted that Bank of Australia has taken this approach.] 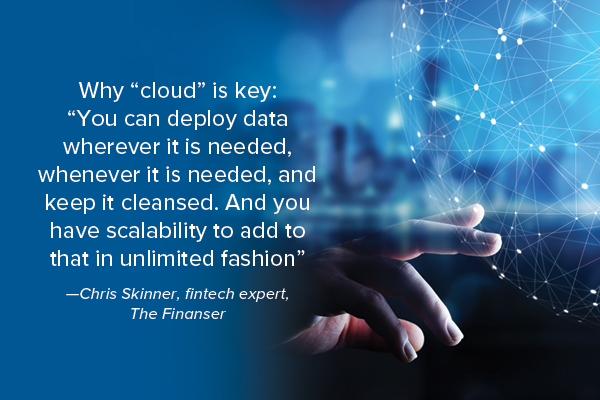 The U.S. banking system lags much of the rest of the world in digitalization, according to Skinner. There are several reasons why, he said. One, touched on above, is the constraints of legacy systems.

Another clearly is the American regulatory mindset, particularly in regard to fintech, where it is quite different from the U.K. and other countries.

One example is the “Regulatory Sandbox” set up by Britain’s Financial Conduct Authority to allow fintech experimentation outside the bounds of normal regulatory constraints. Other countries, including Singapore and Dubai, have similar arrangements.

U.S. regulators recognize the need for banks to innovate, and they acknowledge the beneficial ideas flowing from the largely unregulated fintech community. However, they aren’t willing to create a formal arrangement akin to the sandbox idea. While the Comptroller’s Office has established an Office of Financial Innovation, Comptroller Thomas Curry has resisted the idea of any protected status for experimenters.

“The reality of the U.K.’s FCA sandbox,” said Skinner, “is basically if someone has got a good idea that will make the market more competitive, improve the customer experience, or reduce inefficiency in financial institutions, once they’re in the sandbox they have the full nurturing access to the regulators to get licensed. So you actually then effectively get mentoring to market through the regulator.”

Skinner explains the significance: “The old way was more ‘Let’s slap people who are doing wrong things rather than help people startup new things.’ The sandbox is completely different. The whole idea is that you can go from an idea to an initial license within two months—at the fastest speed—which is quite incredible.”

The U.S., of course, is coming off the financial crisis in which many consumers were harmed. So it’s not surprising American regulators are reluctant to give somebody a blank check and the incentive of experimentation with no penalty. (Although the U.K. had its own issues in that era, such as the debacle at Northern Rock, and has still looked forward.)

Politics obviously come into play, as does inter-regulatory tension between the Consumer Financial Protection Bureau and the prudential regulators. While the Trump Administration favors innovation and fresh approaches in the big picture, no clear direction has emerged yet regarding financial services, beyond the Administration’s clear dislike of the overall thrust of the Dodd-Frank Act.

The OCC’s fintech charter proposal is an attempt to deal with the complex issues involved in the U.S. situation and Skinner views the proposal as a positive, “if someone steps up to the plate to use it.” That may not happen anytime soon as the proposal is under fire from the Conference of State Bank Supervisors—which filed suit against OCC in late April—and other groups.  “Is fintech charter courageous or outrageous?”

Skinner pointed out another, rather interesting, difference between the U.S. and the U.K. situations that, even in this era of instantaneous communication, comes down to geography:

“The great reason why London succeeded so quickly at becoming a fintech capital is that the regulator, the technologists, and the financiers all sit within 30 miles of each other in the city of London.

“In the U.S. you’ve got financiers on Wall Street, regulators in Washington, and technologists in Silicon Valley. There’s too much distance.”

In Part 2 of this series, Chris Skinner explores the retail banking revolution in the U.K. compared to the virtual drought of new charters in the U.S. Read "Is the world lapping U.S. financial innovation?"

In Part 3 of this series, Chris Skinner reveals his own take on Isaac Asimov's robotics laws, "Skinner's Three Laws of Banking Bots." Read "Of relationships human and bot" 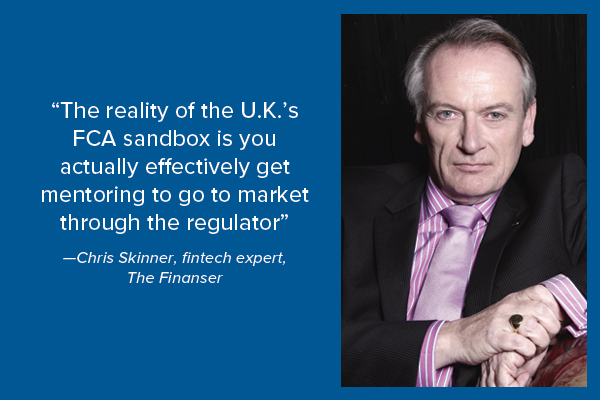