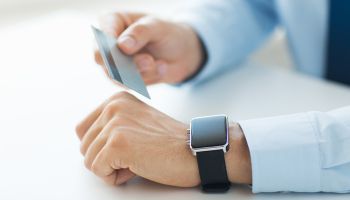 What if bank apps worked more like Fitbits and Apple Watches?

The biblical observation on the love of money notwithstanding, David Lester thinks money should be seen as a positive thing. After all, money pays for many items that improve our lives—a house, an education, retirement. Lester doesn’t think money should be siloed in our lives. Much of what makes our lives tick requires the prudent use of money, he says.

While many banks have introduced apps to put their services right in customers’ pockets, Lester, managing director and U.S. finance lead at Brightworks Interactive Marketing, says these haven’t improved the experience. Most messages relayed by apps carry a negative tone, he says. An app may deliver a fraud alert or warn that your balance has grown low. Helpful data, but Lester wonders if apps could do more, especially by making use of an app a more positive experience.

Also, “bankers tend to talk to people as they talk to each other, rather than as consumers,” says Lester, who is a former banker and investment firm employee.

What he has in mind are apps that more resemble the experience of using a Fitbit or, as he does, a fitness app tied to an Apple Watch. His ideal financial app would deliver the warnings and updates, but that would be just the beginning.

Lester wants to see financial apps give the kind of reinforcement, encouragement, and advice that the best health-oriented apps and gadgets do. If technology can improve physical health, he argues, why not financial health?

Banks have a edge here

“Fintech firms are nibbling at this,” says Lester, but most haven’t made a big commitment, which leaves an opportunity for banks that see the logic of building a broader app experience.

“Banks could have a much better brand affiliation,” he suggests. “Banks need to make things more like a game, as the Fitbit does.” Fitbit, for example, sends a special celebratory signal to its wearer when he has made his daily step goal.

Here’s an example of the positive reinforcement that Lester would like to see. At the end of a month, a consumer has spent $200 less on restaurant meals than in the previous month. The ordinary app would be silent on this thrift.

A Lester-inspired app would congratulate the consumer on cutting spending. It would follow up and suggest putting the money into savings, paying down debt, or placing funds into a retirement account.

“These are the kinds of messages that bank apps should be sending,” says Lester, who is in his 40s. “Imagine the ‘brand-halo’ this would produce.” The latter is the positive association of the bank’s brand in the consumer’s mind.

Building on health apps’ goal-oriented approach, New York City-based Lester thinks bank apps could adopt similar encouragement that could last over the long term. This could take the form of “badges,” icons that establish recognition for having met a financial goal. Lester thinks these “feel-good” rewards could be made more tangible if banks established actual rewards for accumulation of a given number of badges. For example, for customers who love to travel, bank apps could help them track their way to trip rewards—somewhat like frequent-flier programs.

Lester sees the appeal of a positive bank app going beyond younger customers. Smartphones and tablets have infiltrated every demographic, and he believes many older customers would find such a financial app appealing.

Here’s an attractive wrinkle. For a bank app to become a true wrist-based financial coach, Lester says that, ideally, a customer would centralize all financial relationships with one institution—something banks have often tried to do, with varying success.

Overall, Lester sees apps that deliver positive, helpful, even educational messages as humanizing banking in a way that only a relationship with a personal banker has, up until now.

“Part of the reason that people don’t want to interact with banking is that it’s like going to the dentist,” Lester says. Adding some fun and positivity to the mix, he believes, “could be a game changer.”

This article originally appeared in the June-July 2017 Banking Exchange magazine.