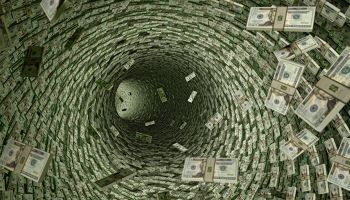 With debit usage moving ahead, will cash go away? How does this affect the competitive picture?

For the first time, consumers are swiping their debit cards more than they are using coin or currency, according to an analysis by Moebs Services.

Extrapolating from the Federal Reserve’s Payment Study for 2015, Michael Moebs, economist and CEO of Moebs Services, estimates that by the third quarter of this year, debit cards will be used for 66.3 billion transactions, while 65.9 billion transactions will be in cash.

The Moebs Payment Study predicts that in the next three to five years, less than 20% of transactions will be paid with cash or checks. Payment methods such as credit and debit cards, ACH, and prepaid cards will be used for 80%.

Another factor in the declining use of cash is new apps and online payment avenues such as Venmo and LevelUp that allow person-to-person transactions.

The dominance of non-cash payment methods means depositories face stiff competition from shadow banking companies, Moebs says. Walmart has entered the depository business with its e-checking and prepaid cards; Starbucks and Amazon have created digital wallets that can be used for payments to them.

The Moebs Payment Study says the implication is clear: Banks must capitalize on the changing payment dynamics or shadow banking will dominate the business.

In an interview with Banking Exchange, Moebs set out a strategy banks can follow.

How can banks stay on top?

“There needs to be competition in the payment system; the Federal Reserve has to open this up,” Moebs says. “Visa now controls half the volume. There should be a dozen different suppliers.”

Competition among companies supplying software to depositories is crucial, he says, “and it doesn’t exist right now.” If it did, that would create the second needed remedy: bringing legacy payment systems up to speed.

“The vast majority of banks use legacy systems that are very good from the payments side—they will process transactions—but are very poor in tracking information on payments,” Moebs says. “If I were in front of a group of bank CEOs, I would tell them that their systems, for the most part, are holding them back.”

Credit unions tend to have more open systems that can gather much more information to track consumer behavior, Moebs says his research has found.

Consequently, American banks typically rely on systems that lag much of the developed world. “Germany, Great Britain, Japan, Australia, and Canada have payment systems far superior to ours,” Moebs says.

Change won’t come cheaply. Moebs estimates that the needed updates will cost most banks millions of dollars and, for the biggest banks, the cost will be in billions.

“That’s where shadow banking has the advantage; they’re starting on new systems,” Moebs says. “Banks need open systems that are fast and carry a lot of information.”

He says every depository will need a chief sales officer or a chief marketing officer at the C-level who is paid as much as the lenders and other comparable staff, and that isn’t happening today. Moebs believes this is most likely because women dominate jobs in payment and operational systems.

“More than 90% of people in payment services are women, and they have not been given the recognition or payment they deserve,” he says. “We have to get the best people in there and pay them accordingly. When we talk payments, we have to talk people.”

The Federal Reserve also needs to be talking—about how payment preferences are changing and how banks should get their systems in order, in Moebs’ view. The first paragraph of the Federal Reserve charter mentions the need to concentrate on payments systems, Moebs says, yet he found it odd that at the central bank’s recent Annual Economic Symposium in Jackson Hole, no mention was made of the historic occurrence that debit card transactions had exceeded those made with credit and cash.

“The Federal Reserve is so far behind compared to other central banks,” Moebs says.

Nonetheless, Moebs hopes that the U.S. will soon update its payment systems to keep pace with other developed nations, and when it does, that will be the demise of shadow banking.

“They’re in commerce, and there’s a difference between commerce and banking,” Moebs says. “Banking’s role is as a financial intermediary, matching those who have funds with those who need funds. Because of that, the central banks should get a handle on this.” Correct the system, and there will be no incentive for shadow banking, he says.

For instance, Walmart developed its own payment system because of the exorbitant interchange fees it pays. “Walmart wants to do it all themselves so they don’t have to pay bankers close to $1 billion,” Moebs says. “They got into prepaid cards and checking just for their customers because if they keep it all within the Walmart family, there is no interchange.”

If the U.S. operated on a standardized payment system that was more efficient and less costly—and the Federal Reserve allowed competition—it would dramatically drive down costs, he says.

The time for banks to make changes is now, Moebs says. “We are so far behind that everybody can catch us in the payment systems—and that’s got to be ended.”

Read Mike Moebs every month in “The Prairie Economist”