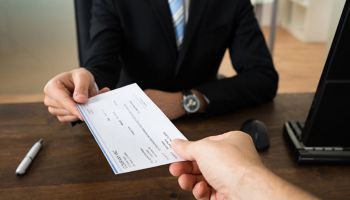 This is the second part of a series presented annually by Crowe Horwath on BankingExchange.com in banking compensation trends.

The labor market for bank employees is very competitive, and likely to remain so as banks plan to grow and employee turnover rates remain high.

The results of the 2017 Crowe Bank Compensation and Benefits Survey show that, for the first time since the 2008-2009 recession, a majority of the participating banks plan to increase staffing levels during the coming year.

More than half of the survey respondents reported they plan to increase staffing levels during the coming year, while the number of banks planning to reduce staffing levels remains near all-time low levels.

Altogether, 54.9% of the survey participants said they plan to increase staff in the coming year, either in response to normal growth (41.7%) or as a result of expansions or acquisitions (13.2%).

In the longer term, three trends are particularly noteworthy:

1. The number of banks expecting staff expansions due to normal growth has been climbing steadily since 2012.

2. The number of banks expecting to maintain current staffing levels has been declining steadily since 2013.

3. The number of banks planning deliberate staff reductions dropped sharply in 2015—and has remained quite low since then.

Taken together, these concurrent trends suggest that the competition for talented employees is likely to remain relatively intense for the foreseeable future.

The ongoing battle for talented employees is reflected in another finding in the 2017 survey. Average employee turnover rates climbed for the third consecutive year in 2017, reaching their highest levels in more than a decade—7.3% average turnover for officers and 18.9% for nonofficers. (See Exhibit 2.) 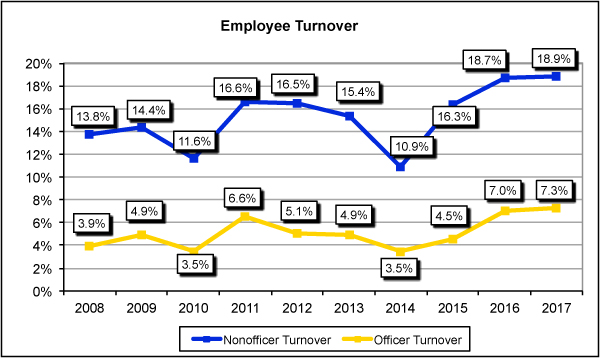 Higher employee turnover can be interpreted in a number of ways. Most obviously, it is a sign of a strong labor market and continued economic growth. At regional and national industry gatherings in recent months, a number of executives have commented on the increasing competition they are experiencing when recruiting nonofficer employees, particularly in customer-facing positions.

The competition comes not only from other banks, but also from retailers and other businesses who are under pressure to improve their customer-service capabilities.

In some markets, tellers with a moderate level of experience are actively targeted for recruitment by organizations offering higher pay and benefits, in exchange for working conditions that might be slightly less appealing than those experienced in the typical bank branch. 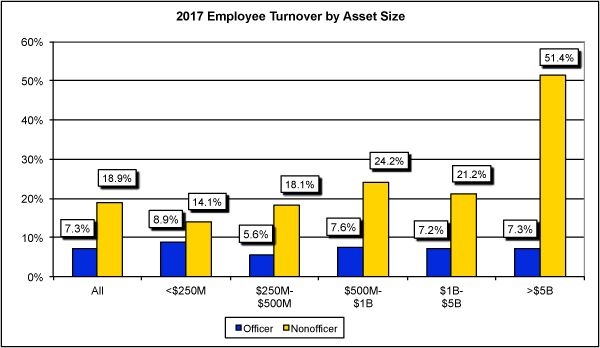 More ominously, however, the high turnover rates also might be an indication of low work engagement, stressful working conditions, or overall employee dissatisfaction.

With bank growth expectations and employee turnover levels both at high levels, upward pressure on employee salaries is inevitable. Banks can respond to these pressures in a variety of ways, but most human resource professionals recognize that simply boosting pay levels is not necessarily the best way to compete for talent.

When employees are asked to identify the best employers to work for, the companies that lead the way very often pay slightly below the median pay ranges in their industries and geographic markets. Rather than relying on base pay or cash incentives alone, those companies identified as “employers of choice” often opt to offer a broader package of inducements to attract and retain the best talent.

In 2017, the number of banks that characterized their total rewards strategy as being above-market declined slightly, reversing what had been a pronounced upward trend. (See Exhibit 4.) Prior to 2017, the use of above-market compensation strategies had been growing rapidly and steadily—in fact, the number almost had tripled over a span of just four years, climbing from 10.4% in 2012 to 28.5% in 2016. 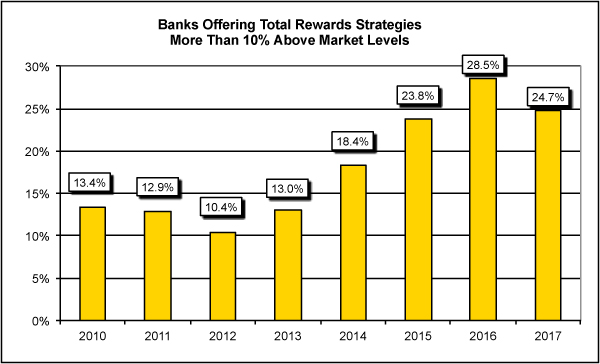 The reversal of the previous upward trend in the use of above-market compensation strategies could be interpreted as an indicator that salary pressures might start to moderate in the near future.

However, as noted earlier, overall employee turnover rates for both officers and nonofficers are still climbing, and a majority of executives in the survey expect they will be adding staff over the next 12 months.

These somewhat conflicting signals indicate that bank executives and particularly human resource executives— should remain alert to the shifting trends and should be prepared to revisit both their compensation packages and their broader employee retention strategies in the months to come.

Next: Part 3 of this series: "Attracting and retaining tomorrow’s bank leaders"