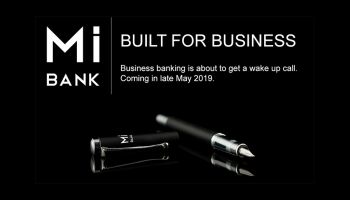 Michigan will welcome a new bank this month, with a new model that is very different than some of the digital players that are looking to offer an alternative to traditional banking functions.

Mi Bank plans to launch on May 28. Rob Farr, a Michigan banker, raised $30 million the hard way: one investor at a time with more than 200 different sources of capital. This is good news for venture capitalists and private equity players that want to raise funds for a new bank with a new vision.

Michigan has had more than its share of economic struggles while most of the country has had sustainable growth. Regional banks have been dropping like flies throughout the state, which can now be counted with two hands… and almost one.

While Mi Bank will have at least one branch to start, not surprisingly the bank has made a commitment to digital first with mobile app transactions front of mind from the start. According to local media, Mi Bank has already signed a multiyear contract with fintech company Fiserve.

Additionally, the bank will be targeting smaller business customers, according to reports, as they target business up to $25 million in revenue. Interestingly, Mi Bank is not looking to be a bank for the unbanked or small businesses with only one or two employees. The premise seems to be that there is an opportunity to close relatively large deals that are still too small for the national banks to have interest. In other words, with consolidation, the bet its that there is an opening for midsize business financing.

There are only about five banks left at the community bank level in Michigan with a double digit decline in the state. Similar business models in other parts of the country have worked out well based on asset growth. The founder also founded Bank of Birmingham and was able to get through a difficult crisis, and ultimately carried the regional bank through an acquisition.

Two big goals of the bank will be to attract businesses large enough to help Mi Bank get to break even within a couple of years, and to have enough day to day customers to be able to get to at least $100 million in assets as fast as possible.