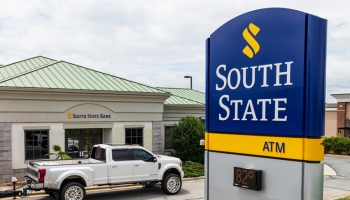 CenterState Bank Corporation and South State Corporation have agreed to a merger, creating a regional bank worth approximately $6 billion.

Following the completion of the deal – expected in the third quarter of 2020 – the combined entity will trade as South State and be responsible for $34 billion in assets and $26 billion in deposits, according to a joint statement from the two companies.

The two banks said the merger would combine “two highly respected management teams operating complementary business lines”, as well as diversifying their geographical coverage. CenterState currently operates in Florida, Georgia, and Alabama, while South State has a network throughout North and South Carolina, Georgia, and Virginia.

Hill said: “We are excited to partner with CenterState. We have great respect for John, the management team and the company CenterState has built. This is a great combination of cultures, which will create tremendous value for our shareholders.”

Corbett added: “We have known and admired Robert and his team for over a decade, and we believe our two organizations are an outstanding fit. Combining these two high-performing teams will allow us to build an even stronger company together.”

Alongside Corbett and Hill, the combined executive team is proposed to be made up of three executives from each company:

The boards have already identified $80 million worth of annual net cost savings, which are expected to be fully phased in by 2022 – a reduction of 10% on projected 2020 expenses.

The merger is subject to shareholder and regulatory approval.

The deal follows the agreement announced last week between Tennessee banks FB Financial Corporation and Franklin Financial Network, which will see the two banks merge in a transaction worth $611 million.

Consultancy and accounting giant PwC has forecast that the favorable capital position of many companies combined with the need for innovation and consolidation will likely drive more merger and acquisition activity in 2020. Last year saw $87.2 billion worth of M&A deals in the US banking sector, including $37.4 billion in the last three months alone.