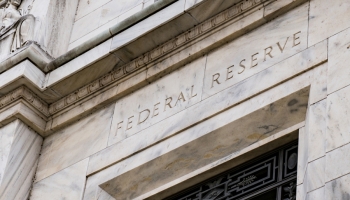 The COVID-19 pandemic will put strains on the US banking sector despite institutions entering the crisis with large capital buffers, according to the Federal Reserve.

In a new Financial Stability Report, the Fed said reforms introduced post-2008 had “substantially increased the resilience of the financial sector”.

However, in the near term as a result of the recent economic shutdown “financial sector vulnerabilities are likely to be significant”, the central bank’s report stated.

“The strains on household and business balance sheets from the economic and financial shocks since March will likely create fragilities that last for some time,” the report said.

“Financial institutions – including the banking sector, which had large capital and liquidity buffers before the shock – may experience strains as a result.”

Large sections of the US economy were shut down from the middle of March in an effort to reduce the spread of the virus. Despite huge stimulus packages from the Fed and US Treasury Department, unemployment spiked to 14.7% at the end of last month.

The Fed’s report highlighted four main areas of concern – chief among them the level of debt held by businesses and households.

This was at a historically high level relative to GDP throughout the first quarter of 2020, the Fed said, with “the most rapid increases concentrated among the riskiest firms amid weak credit standards”.

“The general decline in revenues associated with the severe reduction in economic activity has weakened the ability of businesses to repay these (and other) obligations,” the report said.

“While household debt was at a moderate level relative to income before the shock, a deterioration in the ability of some households to repay obligations may result in material losses to lenders.”

In first-quarter earnings reports, many banks said they had begun increasing their credit buffers in anticipation of an increased number of loan defaults later this year.

On the whole, US banks were “strongly capitalized” before the pandemic, the Fed said. However, with other sub-sectors of financial services relatively highly leveraged – including insurers and hedge funds – pressure on credit lines could increase in the near future.

“All told, the prospect for losses at financial institutions to create pressures over the medium term appears elevated,” the report stated.

The central bank also warned that these emerging stresses could combine with “pre-existing vulnerabilities” elsewhere in the financial system, particularly emanating from Europe, China or emerging markets.

“These risks have the potential to interact with the vulnerabilities identified in this report and pose additional risks to the US financial system,” the Fed warned.

On Friday evening the Fed announced it was making “temporary modifications” to its leverage rules to allow “certain depositary institutions” to grant more support to households and businesses.

The full report is available here.