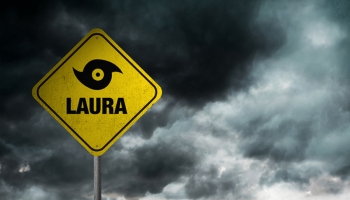 Banks serving the southern United States are taking action in response to the impact of Hurricane Laura, which hit the state last week.

At least 14 people in the US are reported to have died during the category four hurricane, according to reports, with more than 30 killed in Haiti.

Warnings were issued for a storm surge in coastal areas, while on Tuesday CNN reported that some areas of Louisiana could be without power for weeks or months, after all seven transmission lines were badly damaged.

Regions Bank has announced it is granting payment extensions and waiving certain fees for customers in the areas of Louisiana, Arkansas and Texas hardest hit by the storm.

It will waive or refund fees for the use of non-Regions ATMs until September 14 and waive surcharges for non-Regions customers using its ATMs for the same period.

“At Regions, we are focused on meeting the financial needs of the communities we serve at all times, especially times like this when there’s a long recovery ahead,” said Steve Nivet, regional consumer banking executive for Regions Bank. “Our goal with these services is to make the process easier and to work collaboratively with our customers as we move forward together.”

American Express has committed $100,000 to the American Red Cross to support the charity’s relief efforts in affected areas.

The bank said its donation would “help provide critical resources, including food, shelter and medical care”.

Meanwhile, Red River Bank has moved to reassure customers that it is open across the majority of the state, excluding Lake Charles and Sulphur in Southwest Louisiana, where power cuts were affecting residents.

Blake Chatelain, president and CEO of Red River Bank, said: “Hurricane Laura was a very impactful storm and it has been challenging to our communities. We’re fortunate none of our employees were harmed and none of our locations were damaged.

“Our bankers are reaching out to customers in order to provide assistance. We are full service in spite of the challenges and we are here for our customers and communities.”

Public information relating to Hurricane Laura can found at hurricanelaura.la.gov.

It comes as states are struggling to recover from the Covid-19 pandemic. In Louisiana alone, the state health department has recorded 148,882 cases and 4,821 deaths.