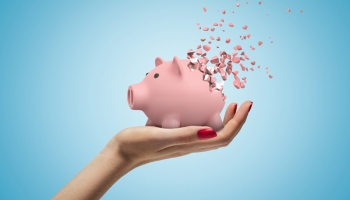 Banks around the world could lose trillions in revenue over the next few years from foregone revenue and loan loss provisions.

As the impact of the Covid-19 pandemic becomes clearer from quarterly reports, credit loss provisions and actual losses are mounting, according to several reports.

As of the end of September, banks around the world set aside more than $1.1 trillion to protect against individuals and companies defaulting on loans. Consultancy group McKinsey expects this figure to exceed the loan loss provisions made by banks following the global financial crisis of 2007-09.

A separate report from S&P Global has estimated global credit losses to hit $2.1 trillion across 2020 and 2021. While North American banks are expected to account for $240 billion of the $926 billion increase in credit losses, Chinese banks are forecast to lose $398 billion.

The expected and realized losses could be compounded by falling returns for banks as interest rates remain at ultra-low levels for foreseeable future. The Federal Reserve has warned that rates could remain at near-zero until 2023.

According to a recent report from Deloitte, the average return on equity for the US banking sector is expected to fall to 5.6% in 2020. However, an economic recovery could see this rebound to 11.7% by 2022.

In the first few months of the pandemic, “robust capital levels” of US banks helped reduce near-term stresses, while “deposit inflows and government support of capital markets minimized liquidity concerns”.

“Until the current economic disruption subsides, [chief financial officers] and treasurers should continue to focus on preserving liquidity and boosting capital,” the report stated. “Unfortunately, though, banks could be hard-pressed to put this cash to work due to ample deposits and limited options for attractive yields.”