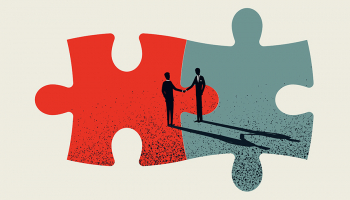 Banking merger and acquisition deals worth more than $7 billion have been announced over the past few days as corporate activity continues at pace.

The transaction, announced yesterday (June 1), is valued at $6.5 billion and will create a banking group with $34 billion in total deposits in locations across Illinois, Indiana, Iowa, Kentucky, Michigan, Minnesota and Wisconsin.

Following completion of the deal, expected in late 2021 or early 2022, First Midwest branches and products will be rebranded as Old National.

Michael Scudder, chairman and CEO of First Midwest, said the combined group would be “in an even stronger position to invest, grow and innovate”.

The transaction is subject to regulatory and shareholder approvals.

The combined entity will have more than $9 billion assets, $6 billion in loans and $8 billion in deposits, according to a statement from First Bancorp. The transaction is expected to close in the fourth quarter of this year, subject to regulatory and shareholder approvals.

The buyer said the deal would “further cement First Bank’s position as the preeminent community bank in North Carolina”.

Down in South Carolina, United Community Banks has acquired Aquesta Financial Holdings – parent to Aquesta Bank – in a deal worth approximately $131 million.

Oconee – parent to Oconee State Bank – said Elberton would convert and merge into its banking subsidiary upon completion of the acquisition. The deal is expected to be completed within 4-6 months, and is subject to the approval of regulators, shareholders, and Elberton’s members.

The combined group will have approximately $550 million in total assets.

Several other transactions have formally completed in the past few days. PNC Financial Services Group’s $11.6 billion acquisition of BBVA USA has completed, it announced June 1, with bank systems and branches set to be fully converted in October.

Dollar Mutual Bancorp’s merger with Standard AVB Financial Corp was completed on May 28, and Midland States Bancorp announced today (June 2) that it had finalized its purchase of ATG Trust Company.