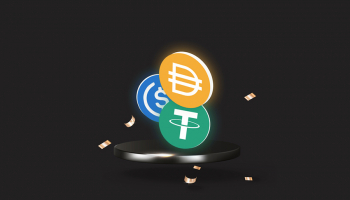 Stablecoin legislation should only be issued by insured depository institution and providers of custodial wallets should be subject to “appropriate federal oversight”, according to President Biden’s highly anticipated Working Group on Financial Markets report.

The report, which was published in conjunction with the Federal Deposit Insurance Corporation (FDIC) and the Office of the Comptroller of the Currency (OCC), examines potential risks and regulatory gaps around stablecoins, as well as recommendations for mitigating risks.

Stablecoins are typically backed by fiat currencies, and can be redeemed upon request, however the report states that there are no standards in place around stablecoin reserve assets, which could lead to vulnerabilities.

According to the report: “Failure of a stablecoin to perform according to expectations would harm users of that stablecoin and could pose systemic risk.”

“The mere prospect of a stablecoin not performing as expected could result in a ‘run’ on that stablecoin… Fire sales of reserve assets could disrupt critical funding markets, depending on the type and volume of reserve assets involved. Runs could spread contagiously from one stablecoin to another, or to other types of financial institutions that are believed to have a similar risk profile.”

The report calls for a “consistent and comprehensive regulatory framework” to increase transparency into key aspects of its arrangement and ensure that it functions during normal times and stressed market conditions.

The Financial Stability Oversight Council is also called on to address risks such as designating what activities can be conducted within stablecoin arrangements, or whether it is likely to become a systematically important payment which would be subject to an examination and enforcement framework.

Alongside this, the working group recommended that stablecoin issuers should “comply with activities restrictions that limit affiliation with commercial entities,” to maintain the separation of banking and commerce.

American Bankers Association president and CEO, Rob Nichols welcomed the report. “Stablecoins—along with the broader digital asset market—are an important issue for ABA and our members as banks actively evaluate ways to safely and responsibly allow their customers to engage with digital assets through their banking relationships.

“Stablecoins have implications for consumers, the financial system and the broader economy, and careful consideration is required to determine how best to regulate this market.”

In October, FDIC’s McWilliams called on clear rules for crypto assets, including stablecoins. It follows FDIC chairwoman Jelena Williams stating greater clarity on the use of crypto assets was in the work.