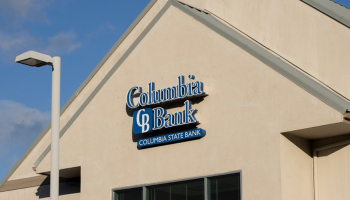 Seven Columbia Bank locations across Washington and Oregon are to be sold to 1st Security Bank of Washington, while three California offices will be bought by First Northern Bank, which is headquartered in California. Columbia said the sales were designed to satisfy requests from the Department of Justice (DoJ).

The Federal Reserve gave the green light to the Columbia-Umpqua merger on October 25, but highlighted several regional markets that warranted “special scrutiny and a detailed review” due to concerns that the combined bank would control too big a share of deposits in each region.

In Washington, Columbia is selling two sites in Goldendale and White Salmon, and in Oregon it is selling branches in Newport, Waldport, Ontario, Manzanita, and Tillamook. The transaction will see 1st Security Bank take on approximately $510 million in deposits and $76 million in loans.

The three California branches — in Colusa, Orland, and Willows — have approximately $128 million in total deposits and $4 million worth of loans between them.

The sales are expected to be completed in the first quarter of 2023 and are subject to regulatory approval and the eventual completion of the Columbia-Umpqua merger.

Joe Adams, CEO of 1st Security, highlighted that the deal marked “the expansion of our franchise into the Oregon market”, adding: “As experienced acquirors, we are committed to providing our new customers and employees with the best possible transition from Columbia and look forward to offering our personalized banking services to these communities for years to come.”

First Northern’s president and CEO Louise Walker said the trio of branches her bank was to acquire were “a natural fit” for the company’s existing network.

Last month, US Bank and MUFG Union Bank announced the sale of three California branches to HomeStreet Bank, also under the instruction of the DoJ, in order to facilitate US Bank’s acquisition of MUFG.