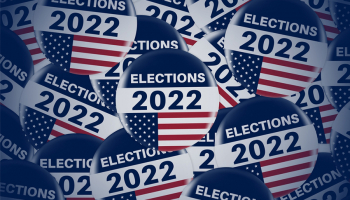 Banks and the Securities and Exchange Commission (SEC) could come under scrutiny over environmental and social issues following the midterm elections.

Republican Representative Patrick McHenry, who won his election with a 72.7% share of the vote in North Carolina this month, is expected to take over as chair of the House Financial Services Committee.

He and other Republican members of Congress have been vocal in their opposition to recent decisions by major banks to cut funding to gun manufacturers, as well as criticizing the SEC over its plans to introduce reporting rules related to environmental and social issues.

In September, McHenry and others wrote to Amalgamated Bank and the Financial Crimes Enforcement Network raising concerns about the bank’s decision to cease doing business with firearms manufacturers and sellers.

He also called on retail banks to focus on helping Americans to navigate the current difficult economic environment, rather than “far-left talking points to appease progressive activists”.

In addition, the new committee leadership could see cryptocurrency companies come under greater scrutiny in the wake of the collapse of digital assets exchange FTX. Just last week, McHenry tweeted that the FTX bankruptcy “makes it abundantly clear we need to establish a legislative framework and provide clarity to the treatment of digital assets”. He said the committee would hold bipartisan hearings to “get the answers Americans and FTX’s customers deserve”.

In a statement to the ABA’s official journal, the association’s president and CEO Rob Nichols said banks were “committed to working with lawmakers from both parties who share our interest in banking policies that support the economy, provide banks with the regulatory clarity they need and promote financial inclusion”.

While Republicans and Democrats are divided on many issues, Nichols said this did not automatically mean bills would be gridlocked in Congress and the ABA would help progress “commonsense legislation”.