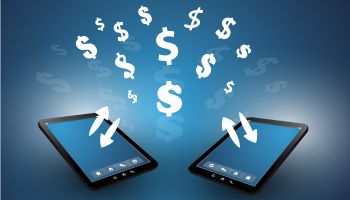 This new thing really is something to pay attention to as it develops. It has the potential of ushering in global real-time payments through existing banks—while leapfrogging over the existing correspondent banking system.

The concept behind the internet of value is that, with new technology, value in the future will move like information has been moving over the last 20 years through the internet.

“It used to be expensive and slow to communicate overseas. Now, with the internet and its interoperability with all sorts of different countries’ systems, it’s instant and nearly free. The internet of value, for the first time, solves the problem of lack of interoperability between networks,” says Chris Larsen, CEO and cofounder, Ripple Labs, in an online podcast. (Much more about Ripple Labs in a bit.)

The driving force behind the internet of value is the spread of a new protocol called the “distributed ledger.” Clearmatics defines this as a digital record of who owns what, not maintained by any central administrator, but replicated among many different nodes in a peer-to-peer network, subject to a consensus algorithm that ensures that each node’s copy is identical to every other copy.

An early form of distributed ledger use is seen in the emergence of Bitcoin and its sustaining software called “the block chain.” While Bitcoin seems to be faltering due to the risks of fraud and bankruptcies, the block chain has gained much close attention by established financial institutions and systems.

Massimo Proverbio, senior managing director, Accenture Payment Services, says in a blog about the block chain: “It enables settlement in a decentralized way using a network of computers mutually agreeing to validate and record a transaction through a consensus-based approach. Depending on how the block chain is applied, transactions may be settled in real time without using independent networks and payments systems running on centralized and proprietary software.”

And here’s where Ripple Labs makes its big splash.

Says Accenture’s Proverbio: “Ripple is a great example of combining the benefits of the block chain technology without exposing payments users to the risk of frauds and bankruptcy. Through its open source protocol it allows banks—and not end users—to exchange values in real time and at almost no cost, when compared to the existing payments networks.”

Ripple’s Larsen says his company’s protocol is inspired by Bitcoin and block chain technology, but takes it further. First, it doesn’t require a whole new currency—it works with anything of value, particularly existing currencies. Also, instead of massive block chain servers that use an incredible amount of electricity to run, the Ripple protocol uses about the same amount of electricity as an email server.

And there’s this: “Transactions will settle in three to six seconds, rather than the seven to 45 seconds with block chain,” Larsen says. That’s dollars to pounds, euros, or whatever currency, and back again.

Back to the internet of value: There’s already a working group, complete with a task force, looking into “how the web can connect new and existing value networks and enable cross-network clearing and settlement that is secure, low-cost, and fast,” according to a post by the Web Payments Interest Group.

Not to dwell too much on Ripple Labs, but it’s hard not to. For example, two relatively small banks in the United States—CBW Bank, Weir, Kans., and Cross River Bank, Teaneck, N.J.—are the first ones to enroll with Ripple’s protocol, joining Fidor Bank in Germany, and, soon, the Commonwealth Bank of Australia.

Says Larsen: “The largest and smallest banks globally are trying to find alternatives to correspondent banking. It [correspondent banking] works, but is antiquated. You can literally FedEx money to Europe faster than you can wire it through your bank.”

“IDC expects payments through Ripple or similar protocols to grow exponentially in the years ahead. As such protocols supersede Bitcoin, the distinction between cryptocurrencies and new payment protocols will become clearer, and the banking industry will embrace the protocols.”

Here’s where the evolution begins

So, just as the original internet limped along through usenets that connected arcane university and government research offices until the World Wide Web made everything easy and interoperable, the internet of value is taking its first baby steps.

The fact that the United States still is just studying real-time payments—due to its extremely complicated and intertwined networks of stakeholders—while many developed countries already have established real-time domestic payments structures, illustrates where the situation stands.

Larsen puts it in perspective: “Soon most of our trading partners will be on real-time systems. But there still is a need to ensure interoperability between those fast systems. We’re at the very beginning of this internet of value.”

Crypto Currencies: The Internet of Value

More in this category: « Going digital—really digital Digital drivers for banks »
back to top