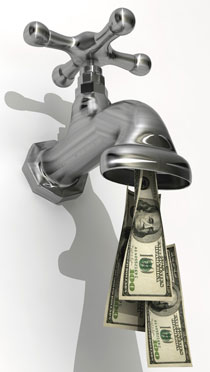 The Administration opened the tap for small business lending, but only 277 lenders wound up taking part.

While disbursements under the Small Business Lending Fund were much lower than expected, the banks that chose to participate have fulfilled the program's aim and grown loans at an accelerated pace.

The 277 lenders that accepted SBLF funds grew their qualified small business loans at an average rate of 55.9% over the course of the program through June 30, according to a Treasury report dated Oct. 9.

The SBLF program, a brainchild of President Obama, completed its first anniversary on Sept. 27. The program was enacted into law as part of the Small Business Jobs Act of 2010 (JOBS Act) to provide eligible financial institutions with capital in an effort to boost small business lending across the country.

Treasury had  $30 billion available under the program. It received 932 applications for only $11.8 billion, of which only 332 applications were approved for $4 billion in disbursements. Additionally, roughly half of the SBLF bank participants entered the program by exchanging TARP shares for SBLF shares.

For banks that joined SBLF without first participating in TARP, the program has been a success. The bank participants that did not use SBLF money to repay TARP reported an average growth rate of 90.3% in qualified small business loans as of the second quarter over the baseline, while the average growth rate for the banks that switched from TARP to SBLF was only 19.2%.

The baseline, as defined under the program, is the average amount of qualified small business loans outstanding in the four quarters ended June 30, 2010.

Lending growth
The aggregate qualified small business loans by the 277 bank participants remaining in the SBLF program stood at $41.7 billion at June 30, 2012, an increase of 17.7% over the baseline of $35.4 billion.

The aggregate loan data reported in the companies' regulatory call reports reveal double-digit growth rates for all loan types as of the second quarter over the baseline. The aggregate commercial and industrial loans were up 31.2% to $23.1 billion at June 30 over the baseline. The agricultural production loans had the second highest growth rate of 24.5% as of June 30. 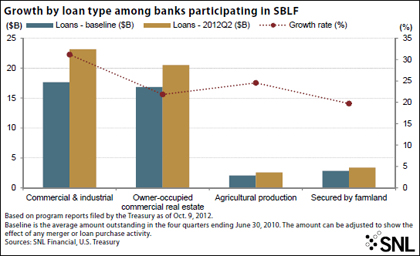 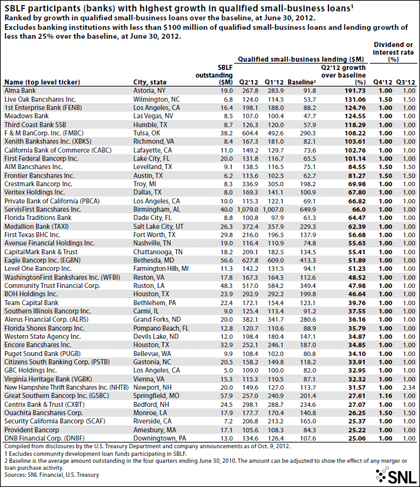 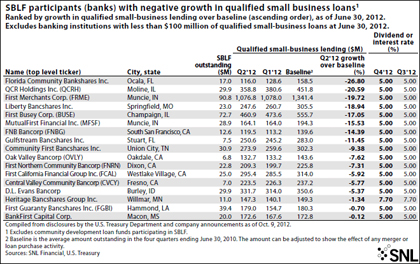 Where growth isn't
Though, overall, SBLF participants are recording growth in qualified small business loans, there are a few companies with a shrinking portfolio.

Seventeen participants with a portfolio of greater than $100 million saw negative growth in qualified small business loans over the baseline. Ocala, Fla.-based Florida Community Bankshares, Inc., saw the highest decline of 26.8% in its qualified small business loans. Five of the 17 participants with the lowest growth are headquartered in California.

The number of participants qualifying for the minimum rate of 1% for the fourth quarter increased to 150 from 139 earlier, while 42 companies would be paying dividend/interest rates at 5%, down from 62 companies in the previous quarter. Companies that issued debt instruments to the Treasury in lieu of shares pay an effective pretax rate of 7.7%.

[Editor's note: Under SBLF, lenders paid lower rates progressively as they increased their rate of lending growth. For a detailed discussion and an explanatory table about this sliding scale approach, click here to visit Treasury's resource page.) 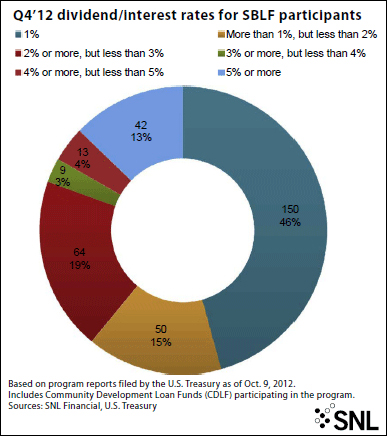 Redemptions and mergers
The Treasury has received total dividends of $113.2 million and principal repayments of $48.1 million, which includes four full redemptions and four partial redemptions as of Sept. 30. Six of the eight redemptions came from the banks that replaced TARP with SBLF. 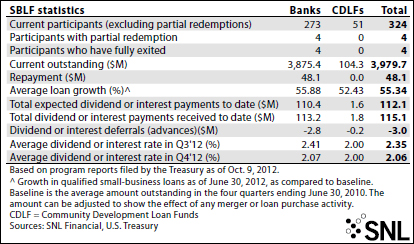 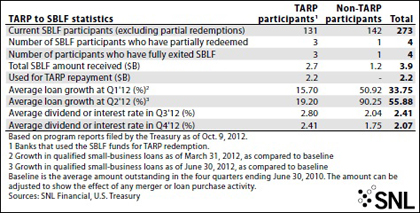 Six of the eight companies that kicked off the redemptions were paying the maximum dividend rate for the third quarter, meaning they had not grown loans enough to qualify for a lower dividend rate. The other two companies repaid after being acquired.

Oak Harbor, Ohio-based Indebancorp repaid $2 million on Sept. 20 to fully exit the SBLF program. It was struggling to increase qualified small business loans as of March 31 so the dividend rate was set at 5% for the third quarter, the maximum under the program.

Earlier in the third quarter, Lynden, Wash.-based Peoples Bancorp reduced its SBLF liability by half with a payment of $9 million on Aug. 31. The company is also paying its SBLF dividend at the maximum rate because of meager growth in qualified small business lending. The two companies to repay SBLF outstanding after being acquired are Boston-based Mercantile Capital Corp. and San Diego-based Security Business Bancorp.

There have been 24 whole bank acquisitions by SBLF companies since the program kicked off.


[This article was posted on November 6, 2012, on the website of Banking Exchange, www.bankingexchange.com, and is copyright 2012 by the American Bankers Association.]