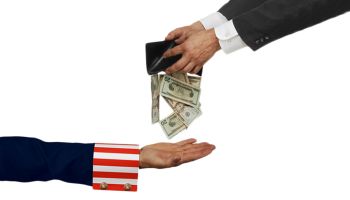 Banks are taking creative steps to redeem their TARP preferred shares before the cost of those securities rises sharply.

The dividend on TARP preferred shares rises to 9% from 5% after the fifth anniversary of TARP participation. This applies whether the U.S. Treasury or an investor that purchased the shares in an auction owns the securities.

For some banks, that rate hike is just around the corner.

SNL found 28 banks with TARP preferred shares outstanding that face a dividend rate increase Feb. 15. Another 33 banks face a rate increase May 15. Of these 61 companies facing a pending rate hike, SNL found that only 12 had avoided missing any dividend payments.

One institution that faced a dividend rate increase in mid-February failed this past Friday. Syringa Bancorp, which had $8.0 million in TARP preferred shares outstanding and had missed 17 dividend payments on the securities, saw its main banking subsidiary shuttered Jan. 31.

A number of banks have taken steps recently to repay TARP, ahead of the dividend rate hike. Others participated in the Treasury's TARP auction process, with the shares often being sold at sizable discounts. Five banks that faced dividend increases by mid-February took part in the Treasury's auctions during the fourth quarter of 2013, while eight banks that faced near-term dividend rate increases redeemed their TARP preferred shares outright in the period.

In January, United Community Banks Inc. redeemed its TARP preferred shares, using methods that were likely cheaper than its cost of capital, which investment bankers usually say ranges between 8% and 12% for banks. The Blairsville, Ga.-based bank announced late in December 2013 that it had received the required regulatory approvals to redeem all of its $196.8 million in preferred stock: $180 million in series B preferred stock issued under TARP and sold to third-party investors by the Treasury; and $16.8 million in series A and series D preferred stock.

Importantly, United Community Banks completed the redemption without issuing common stock and utilized cash on hand, $119 million of bank dividends and $40 million of short-term debt. The short-term debt came in the form of a revolving credit agreement with Synovus Bank for up to $50 million due Jan. 7, 2017. United Community Banks disclosed that, under the credit agreement, it can choose to bear interest at a rate per annum equal to either LIBOR plus 3.75% or at a base rate equal to the highest of the prime rate, the federal funds rate plus 0.50%, and a daily rate equal to one-month LIBOR plus 1.00%, plus a base rate margin of 2.50%.

Others banks have taken similar lower-cost approaches to redeeming their TARP preferred shares. First Capital Bancorp Inc., for example, recently borrowed money to redeem the remaining 5,531 shares of its series A cumulative perpetual preferred stock for $5.6 million. The rate on the shares would have increased to 9% in April.

First Capital Bancorp successfully bid on about half of its TARP preferred stock in a Treasury auction in 2012. The company redeemed the remaining 50% on Jan. 10, 2014.

The Glen Allen, Va.-based company funded the redemption by executing a variable rate subordinated note for $6.5 million with an unnamed financial institution. The subordinated note, which qualifies as Tier 2 capital for regulatory purposes, carries an interest rate of 30-day LIBOR plus 5.00% per annum with a floor of 5.50% and a maturity of 10 years. The company will repay the principal $8,000 per month for the first 60 months and $103,000 per month for the remaining 60 months.

LNB Bancorp Inc. also borrowed money to redeem TARP preferred shares. LNB Bancorp said Jan. 17 that it completed the redemption of all the preferred shares that it issued to the Treasury in December 2008, for the liquidation amount plus $74,000 of accrued but unpaid dividends. The company used proceeds from a private placement and cash from approximately $3 million in borrowings under a line of credit with an unaffiliated financial institution and cash from the company's accumulated earnings and excess capital.

This is not the first time that banks have repaid TARP with a loan. For instance, in the spring of 2013, BNC Bancorp redeemed $31.3 million in TARP, funded with existing cash at the holding company as well as an unsecured $30 million term loan from Synovus Bank.

The loan's interest was determined by BNC Bancorp at either 3.5%, plus a rate equal to the higher of The Wall Street Journal prime lending rate, the Federal Funds rate — plus one-half of 1% per annum and LIBOR determined on a daily basis for a period of one month—plus 1.00%, or 4.5%, plus the 30-, 60- or 90-day LIBOR. The interest rate had a floor of 1.00%.

Hancock Holding Co. was perhaps the first bank to use a loan to help repay TARP.

Hancock repaid Whitney Holding Corp.'s $300 million in TARP funds in conjunction with its acquisition of the bank. Hancock raised $200 million in a common equity offering to help drive the repayment but also received a $140 million term loan from SunTrust Bank. The loan's rate came at LIBOR for the applicable interest period then in effect, plus 2.00% per annum, plus an up-front fee.

The rates on Hancock and BNC Bancorp's loans — like loans that other banks have taken on more recently — were far more attractive than the cost of issuing common equity.

Some smaller banks have explored redemptions, as well. First Citizens Banc Corp said Jan. 17 that it intended to redeem all 23,184 outstanding shares of its series A fixed-rate cumulative perpetual preferred stock originally sold to the Treasury. The Treasury auctioned the shares in 2012. The company set a redemption date of Feb. 15 at a price $1,012.50 per share, which is the sum of the liquidation amount of each share plus accrued and unpaid dividends from Nov. 15, 2013, to but excusing the redemption date.

"Our goal is to have the Series A redeemed prior to the increase in the interest rate on February 14th," President and CEO James Miller said in a statement.

"During the last fiscal year, we paid $168,000 in dividends on this obligation to the Treasury. With the dividend rate scheduled to increase to 9.0% on Feb. 20, 2014, the dividend expense on the preferred shares would have increased to $292,950 annually," President and CEO Paul Brunkhorst said in a news release.

As more banks near their five-year anniversary of TARP participation, the industry will increasingly need to look for ways to handle a significant interest rate hike. This will prove no easy task for banks that are already struggling with limited capital.

Jack Chen and Maria Tor contributed to this article. 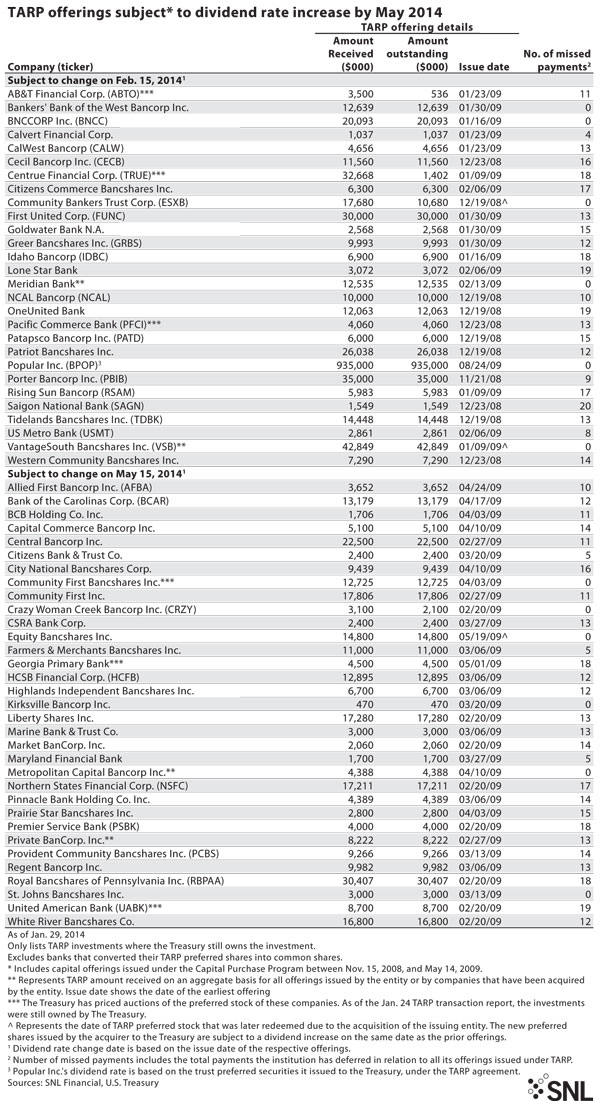