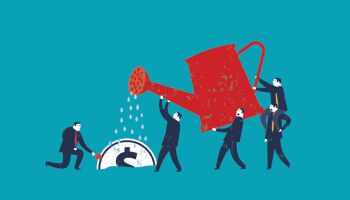 There’s material for reflection for all retail banks in the new Wells Fargo sales program outlined in this article.

For years the industry’s eyes were on Wells Fargo as a cross-selling winner. That reputation went down in flames with last year’s sales scandal. But banking’s eyes continue to scan Wells, which recently introduced a revamped performance management and rewards program that the bank’s leadership described as a beginning, subject to revision based on ongoing experience.

“The devil is in the details,” and the potential improvement lies in careful monitoring were points of agreement among experts interviewed by Banking Exchange who looked at the summary released by the bank earlier in January.

In the wake of settlements reached by Wells with the Comptroller’s Office and the Consumer Financial Protection Bureau—and scathing congressional hearings followed by the resignation of Chairman and CEO John Stumpf—the industry was already reviewing its retail sales. [See “Bank sales under scrutiny”]

Since then, CFPB published Compliance Bulletin 2016: Detecting and Preventing Consumer Harm from Production Incentives, and Comptroller of the Currency Tom Curry recently stated, in a review of industry risks, that OCC would be reviewing the sales compensation programs of major national banks.

In the wake of Wells’ difficulties, banks polled last year by the Pearl Meyer compensation consulting firm have been fielding questions about their retail sales incentive programs. In results released in January, the firm reported that 72% of banks have had questions on programs raised by executive management and 51% by boards. Nearly a third had questions posed by employees themselves.

The Wells affair has set off bells, apparently, because the Pearl Meyer research underscores how much play sales measurement has in banking now. More than half (55%) of the sample use measurements of sales volume and nearly half (47%) use cross-selling metrics.

Pearl Meyer reported that 28% of the banks polled are revising documentation and administrative procedures related to sales efforts.

Much of the blame for the sales scandal landed at the feet of the bank’s sales incentives program and the ambitious goals the bank set at all levels, from the individual employee up to the organization as a whole.

Details of the Wells plan

Wells provided the elements of its new program in an announcement on its website. Shortly afterward more details came in documents and commentary offered to securities analysts during the bank’s quarterly earnings conference call.

Overlaying the new compensation framework was disclosure that in early January Wells Fargo increased the minimum hourly pay rate for all U.S.-based employees to between $13.50-$17, depending on experience and geographic location. Management said this comes, on the low end, to an increase for affected staff of 12%. Wells said that level exceeds the national minimum wage rate—$7.25 an hour—by 86%.

Asked by analysts how this would increase the bank’s operating costs, new President and CEO Timothy Sloan indicated it would be a net positive for the company. Explaining this, he said the bank anticipates the higher base pay will lead to higher productivity, and by controlling turnover among the front ranks. The latter factor would reduce the need to train additional employees to replace departures, he explained.

The new compensation strategy took effect Jan. 1 and applies to all branch team members, including managers, tellers, and personal bankers. The program was developed by Wells in conjunction with Mercer Consulting, an independent compensation consultancy.

The bank said the program includes more oversight and controls than previously had been in place. While the program has had some testing, the bank intends to provide coaching in its application through 2017. During the analyst meeting Sloan said more detail would be coming during the bank’s upcoming Investor Day and he also said that adjustments could be made.

Overall, Wells described the program as taking a longer-term view, including regard for customer experience and customer retention; broader participation in incentive pay among retail bankers; and an orientation towards team performance in the incentive pay for entry-level bankers.

“We will measure our performance based on direct customer feedback as well as by how much our customers choose to transact with us and grow their balances, not just simply trying to sell the next product,” Mary Mack stated in the Wells blog on the new program. The emphasis is intended to dwell on relationships.

Key points of the program, according to bank documents:

• Performance evaluation will be based on customer service, customer usage, and customer relationship growth.

• Focus on the team, not just on individual performance. “More metrics will be weighted towards team (branch) goals rather than individual goals.”

• Expanded oversight. The bank has implemented controls to “monitor bad behavior, including more proactive monitoring and additional oversight at the regional and corporate level.”

• Adjusted pay mix. A greater portion of most covered employee’s pay will come from base pay, rather than variable incentives.

1. Primary customer growth: Growth of customers for whom Wells is their primary financial institution.

3. Branch management risk score: An evaluation of a basket of risks.

4. Qualitative assessment: “Performance evaluations will include more focus on teamwork, risk management, and the ‘how’ of accomplishing objectives.”

Concurrent to all this, the bank has hired independent consultants to evaluate its sales practices both in the retail bank and in other parts of the organization.

In a research report concerning the new program, Sandler O’Neill & Partners praised the effort as providing more clarity for Wells employees. The firm also stated that, “given that cross-sell has been the singular dynamic that investors have considered the cultural differentiating factor for [Wells] (for the better part of a quarter century), our sense is that this story will have to be in many ways re-invented.”

Will the Wells revamp work?

In an age when marketing and sales intersect with compliance and complaint processes in the form of UDAAP, fair banking, and simple legality, this attempt to put the organization on a better footing will be scrutinized heavily as it proceeds.

“Wells is trying to delve into the pledges that it made subsequent to the settlement,” says compliance expert Richard Riese, principal at SMAART.COnsulting and a former senior federal regulator and American Bankers Association compliance chief. The bank took out major advertisements and has engaged in substantial customer outreach to spread the word that it intends to get things back on the right track.

Much depends on aspects of the program not yet publicized, Riese indicated. “The devil’s going to be in the details not published and not described in their blog,” he said.

“It’s a very positive step,” says David Kerstein, president of Peak Performance Consulting Group. “I’m pleasantly surprised that they have taken such aggressive steps. I think this is the right way to go for the industry, not just for Wells Fargo.”

He says it would be essential to use such tools as mystery shopping to have an independent view of how well the program works where customer meets banker.

“You have to be sure that you are building customer relationships and doing the right thing,” says Kerstein. “Wells had lost sight of the overall customer,” he adds, in its earlier emphasis on cross-selling. If the bank can make the team dynamic work and produce the longer-term results it hopes for, that will be a very positive development, he says.

Further, if employees can truly work as a team, and the incentives pay off in that context, “turnover may be reduced,” Kerstein adds.

Regarding the emphasis on teamwork, Riese said that "it's not an uncommon way of trying to create an atmosphere where the group is more important than the individual. In adopting this approach, a bank is trying to have a dynamic that underscores that the customer relationship is a common team goal, not a single employee's sole possession."

However, he added, “a team orientation doesn’t assure that it will produce ethical behavior.”

In addition, in a team-oriented atmosphere, some employees may be satisfied with base pay and leave others feeling they must pull more weight to gain the benefits of incentive pay based on team performance. Riese also pointed out that the commentary regarding entry-level employees raises the question of incentives to be paid to senior retail bankers who will likely deal with higher-level customers.

“This is an improvement in all that Wells is doing,” says compliance consultant Lucy Griffin. “But it doesn’t eliminate the problem.”

Griffin is referring to risks of “gaming the system,” which she says are still present when teams of employees are working together. She points out that there is evidence that some of the bad behavior at Wells resulted from employees sharing ideas of how to bypass the system. Much will depend, she explains, on how well the enhanced monitoring and controls actually work in practice.

Riese added that there is always a risk, where incentives are at work, that higher-value customers will receive more attention. This, he explained, can expose a bank to the risk that customers of more modest means won’t receive the same attention, which can trigger fair banking issues.

“These are the kinds of issues that compensation professionals will have had to struggle with in designing a program,” said Riese.

A matter of culture and attitude

Time will tell how well the redesign will work. “This is only the beginning of implementing and changing course,” said Riese. Regulators typically are informed of such changes, especially in a case like Wells’, he adds, but agencies typically take in the information without giving much guidance on how they feel about a program. Riese says regulators typically don’t give any official “blessing” to a proposal.

Riese notes that Wells has carefully crafted its commitments to serving its customers under existing ethical standards and statutory requirements. The bureau and the bank have not created new fiduciary obligations or created a suitability standard, he says.

Lucy Griffin, who blogs for this website in Common Sense Compliance, says one big question remains: “Does this really change the management culture at Wells?”

Read "Bank sales under scrutiny," a roundup of industry thinking on the sales process.