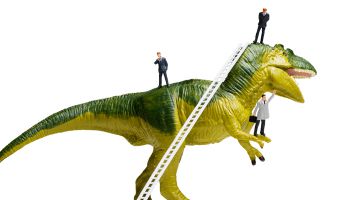 “A huge lesson for banks is to throw out technology regularly and continuously rebuild,” says Alexei Miller of DataArt.

Bankers—particularly those in technology positions—are probably smiling at the headlines above. Don’t get too comfortable, however. The picture is a little more nuanced.

The headline and story reflect the thoughts of Alexei Miller, managing director of DataArt, a 19-year-old technology consultancy and builder of proprietary systems, headquartered in New York with operations in Russia. About 42% of the firm’s business is with financial services customers. Miller manages financial services in the United States.

Miller says bank IT is not given enough credit, whereas “the whole start-up scene is romanticized beyond what it deserves.” Bankers and others in traditional enterprises tend to “race” between the “old and clunky” and the “new world.” This is counterproductive, he says, because it’s never one or the other.

“I think this infatuation with the start-up scene is getting a little out of hand,” he says. “I enjoy the dynamism of the fintech/start-up world,” he adds, “I don’t like the hype.”

Bank tech people are “really good at preparing for complex scenarios,” says Miller. “They are conditioned to the fact that there will always be changes in management, new regulation, new competitors, etc.,” so they design systems accordingly. Sometimes, they overengineer, he adds, “yet if they don’t get it right and get hit by regulators for a critical failure—end of story—the business runs on reputation. Fintechs, on the other hand,” he says, “construct the most probable scenario and ignore the complexity of the outside world.”

As a business strategy, fast failure is great, notes Miller. As a bank technology strategy, it has to be moderated. It’s not okay, for example, to put into production a lending or deposit function and then discover a week later that it doesn’t work. In the general tech world, they’ll “pull a few all-nighters and fix it,” he says. “That is not going to fly in banking with regulators at the gate.”

Nevertheless, Miller points out several areas where bank IT could improve.

“A huge lesson for banks is to throw out technology regularly and continuously rebuild,” says Miller. “Part of the reason bank technology has this reputation for being unwieldy is that bankers hold onto it like it’s a precious object.”

As a result, bank reengineering projects become big and risky because the bank waited so long to change, Miller says.

For banks in this position, there are two options (not counting doing nothing). One is a “big bang” or replacing technology entirely, and two is “refactoring” or changing the system in bits and pieces on the fly. DataArt has done both, according to Miller, and in some ways, the big bang approach is easier because it gets the job done at a lower cost. But he feels the incremental approach has a better chance of success at banks.

Miller’s second recommendation for banks is to continually experiment with new technologies. In this, he regards the proliferation of “labs” within banks as a healthy trend.

He offers one caveat: Don’t isolate labs as a separate entity. There’s more benefit from hosting them within the bank’s technology group.

“A lab is not a unit,” he says. “A lab is a culture, a way of thinking, which should infuse the traditional thinking.” He understands the desire to maximize freedom and creativity, but usually the result will be “us versus them” or “future versus the past”—neither of which is healthy.

All this is overlaid on the reality that many banks outsource some or much of their technology development and processing. Miller points out that it isn’t companies that deliver solutions; it’s people. He says if a bank can assemble a better team of tech people internally, they should.

“Many bankers overestimate the cost of technology and how difficult it is,” Miller maintains. “They are a little too eager to say, ‘We can never do that; we’re too small,’’’ he says, adding that if they can put together a group of five or ten smart people, they can do it.

Miller acknowledges that “ten people in a garage will not replace core processing technology overnight; it’s a much bigger lift.” But small, innovative projects—automating credit application processes, creating new online services—are not expensive and can be impactful in terms of customer loyalty.