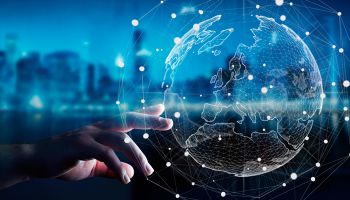 Ever heard of a concierge who’d tell you, “Yes, I understand that Le Château Du Chien is a lovely restaurant. But you can’t afford it. So sorry, sir.”?

Not likely. But then that’s one of the differences between many other businesses and banking.

“Banking is an industry where the answer may be ‘no’,” says U.S. Bank’s Gareth Gaston, executive vice-president and head of omnichannel banking. “There aren’t a lot of industries where the answer can be ‘no’.”

Take travel. When one does business in the travel field, say with a hotel, one is buying what the business does, whether it is the room itself, the food, an attached resort, or the overall experience of staying on the property. Again, banking is different.

“Banking is the enabler to get you to what you really want, not the end in itself,” says Gaston, whether it be saving, paying bills, buying on credit, financing a business. Of course, Gaston adds, the bank sees financial education as building further enablement—such as helping prospective borrowers prepare to apply for a mortgage. "The last thing we ever want to do is say a permanent 'no'," he explains.

How the industry uses digital methods to fulfill its role as enabler is still a work in progress, “a journey that the whole industry is on,” Gaston adds. And he points out that “friction”—an all-purpose label for factors that make working with banks harder than needs be—isn’t just an internal affair.

U.S. Bank is one of the 20 financial organizations behind Zelle, the person-to-person mobile payment product debuting this year. “Friction isn’t just a one-bank experience,” says Gaston, who is involved in Zelle. He says this effort is a good example of how interbank cooperation can reduce friction for all—in this case, by providing bank-operated means for instantaneous payments.

After all, most people aren’t all about their money. When they pay someone else, they want to know it happened, and mentally move on. “And that’s what person-to-person payments does,” says Gaston.

Before Gareth Gaston arrived at the bank in 2014, he’d spent 18 years working in e-commerce and digital experience positions, chiefly in the travel and hospitality business.

Four out of five travelers book their arrangements digitally, and some hotels make it possible to never interact with any human representing their brand and the bed you’ve reserved, once you’ve booked, through check-in kiosks and such.

“Everyone can be a travel agent these days, it’s become so simple to book online,” says Gaston. “But travel apps and bank apps are chalk and cheese.”

Gaston—that last expression is a hint of his U.K. background—is a big believer in digital banking. Well over 60% of U.S. Bank’s customers transact at least some of their business digitally.

“Digital is a core activity for our customers,” he explains. However, he adds that, “I don’t believe a digital-only bank can scale.” While customers may be primarily digital, they will always want the option of talking to a real person, especially if they need a problem solved. 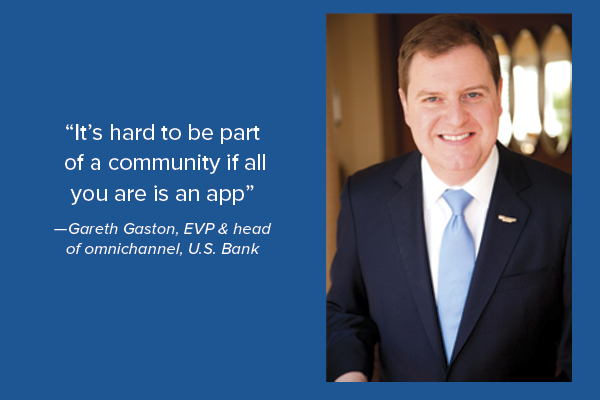 This is part of why U.S. Bank, while a major advocate of digital channels, continues to believe in branches and the full range of channels bank customers have used.

U.S. Bank still maintains over 3,000 branches in 28 states, though it has shrunk the footprints in some and changed the format more and more to facilitate consultation rather than routine transactions. “Nothing has suggested that we shouldn’t have them, or that we should have significantly fewer of them,” says Gaston.

“Customers don’t want one channel only,” says Gaston. “Cash withdrawals from ATMs are not falling off a cliff, for example. The risk of obsolescence in retail banking is often overstated.”

In addition, there’s more to banking than the business side. Gaston points out that part of the bank’s game plan is to be part of each community it serves.

“It’s hard to be part of a community if all you are is an app,” says Gaston.

The concept of the omnichannel began in the retailing business, Gaston says, with the idea serving customers well no matter what touchpoint—or touchpoints—they choose. Two watchwords for Gaston are “single channel excellence” and “multichannel consistency.” With retailers the omnichannel idea began with the concept of “BOPUIS”—buy online, pick up in store. For banks, Gaston says, the idea is to serve customers well no matter what channel or combination of channels they transact by—even, possibly, for the same need. Someone may use a single channel or may use more than one. A customer might be using two channels concurrently or sequentially.

The shape of financial apps seems to have settled into two forms: very narrow apps that handle one function or a narrow range of them, and broad-based apps. Banks often offer the latter.

Gaston believes that the U.S. Bank’s banking app offers a balance. “I believe that you can provide simplicity and completeness in one,” he explains. Part of the key is making the most of the functionality of each major platform. For example, for later iPhone users there is the 3D Touch function, which responds to pokes differently based on the pressure used. A really firm touch on a given icon, for example, can take you quickly to the next, or even several levels down, in an app “without any mucking around” with menus, etc.

Gaston says U.S. Bank issues updates to its app once each month based on feedback from customers and other factors. Customer feedback comes both over the transom as well as from focus groups summoned when the bank has developed new features or potential updates.

“Customers have to tell us when we are doing the right things, not our fellow bankers,” says Gaston. Many customers have the app set for auto update, though Gaston admits that he likes to be able to see what’s going to change in an app before he updates. (At the time of the interview, he had 49 notifications pending that apps are available for updating. 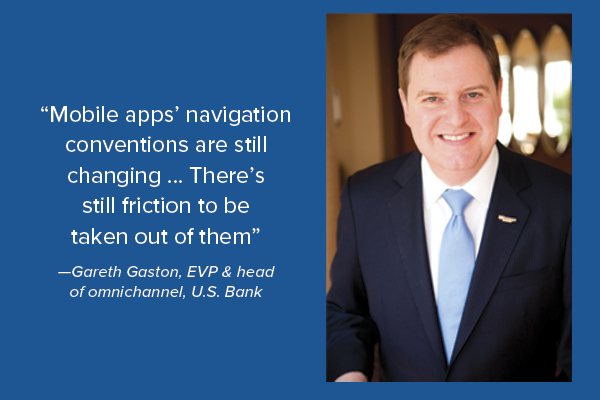 That more changes to app functionality are coming is a certainty for Gaston. He says the online banking functionality has settled into a series of conventions that are understood to be the “norm” by developers, but not so the mobile app.

“Mobile apps navigation conventions, for instance, are still changing,” says Gaston. “Mobile app developers are not yet at a point of being ready to standardize on something. There’s still friction to be taken out of them.”

One meaning of digital is having to do with the fingers, i.e., the digits (from Latin, “digitus” meaning “finger”). In banking digital typically refers to desktops, laptops, and smart devices.

Gaston notes that long-term, banking’s “digital” efforts may leave the finger behind, centering around voice technology.

Still to be developed, as well, are methods of coping with the bane of retail banking: compliance requirements. While there has been talk of “just in time” disclosures, for example, delivered in forms simpler and more accessible than long documents, that hasn’t come along yet.

“Our goal is to be as transparent as you can be,” says Gaston. Shifting to something beyond the traditional written disclosure would require regulatory buy in, he adds. However, tapping his travel industry background, it is possible that something could evolve.

Many airlines took the old pre-flight safety demonstrations and replaced them with slick videos featuring music, a bit of executive level marketing, subtle messages of diversity, and more, all packed into about two minutes

If airlines can turn the seat belt advisory into something that some people actually pay attention to, say Gaston, “there’s a lesson to be learned there.”