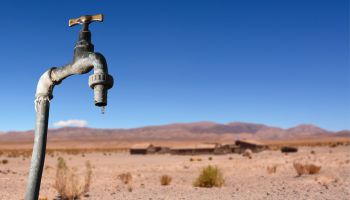 Loan growth at U.S. banks was weak in the first quarter, and a potential trade war with China could increase policy uncertainty and weigh on business investment. But several banks reported full loan pipelines at the end of the quarter, suggesting there could be a turnaround on the horizon.

Median loan growth among the 20 largest banks was just 0.3% on a linked-quarter basis and 2.7% compared to a year earlier, an S&P Global Market Intelligence analysis found. Eight of the 20 banks reported quarter-over-quarter declines in loans. With access to cheap debt in the capital markets, many businesses have paid off their bank loans. Further, a dramatic reduction in corporate taxes as part of the federal tax overhaul in December 2017 boosted cash holdings that were already near all-time highs.

"Paydowns continue to be high, which wasn't surprising when you have borrowers sitting on record levels of cash and you just increased your cash flow with the tax cuts," Wedbush Securities analyst Peter Winter said in an interview.

"It's not more complicated than there's cash and the first place cash goes is to a [revolving line of credit]," said SunTrust Chairman and CEO William Rogers Jr. during an earnings call. M&T Bank CFO Darren King said that, as expected, paydowns slowed during the first quarter, "but not enough for the originations to materially outrun them."

While the piles of corporate cash are impossible to ignore, there appear to be other factors at play. The Federal Reserve's H.8 data on loans across the banking industry, showed a distinct drop-off in lending growth starting in November 2016 after the presidential election. Loan growth, measured as the year-over-year increase in total loans and leases at all banks, was tepid for much of 2017. By the second half of the year, the metric was less than 3.5%.

The weaker growth seems counterintuitive considering stronger business optimism and a run-up in financial stocks in the wake of the election results.

"While there was optimism about the administration, there wasn't a lot of certainty on healthcare costs or what the impact of tax reform and regulatory reform would be," Keefe Bruyette & Woods analyst Brian Klock said in an interview. 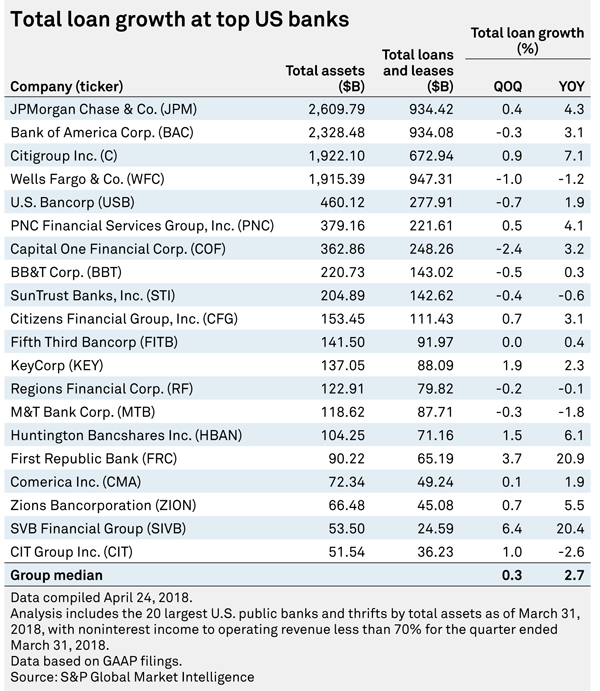 The banking industry's year-over-year loan growth has trended higher recently, breaking 4% in March and reaching 4.4% in the data the week ended April 25. Klock said the passage of tax reform should give commercial borrowers more comfort to act on capital expenditures, although the record levels of cash, further boosted by a smaller tax burden, could soften some of that benefit.

Several bankers struck an optimistic tone for the second quarter and remainder of 2018 during first-quarter earnings calls. M&T Bank's King said businesses should start to see the benefits of the tax cuts translate to stronger gross domestic product growth and greater commercial loan demand, and SunTrust's Rogers similarly said the benefits of tax reform should become evident later in the year. Bankers are also reporting fuller loan pipelines and even higher business optimism.

"Combined with strong growth in pipelines, conversations with our customers [give] us confidence that commercial loan trends will improve as we move further into the year," said U.S. Bancorp CEO Andrew Cecere during an earnings call.

Still, bankers have reported robust optimism over the last year, and it has yet to translate to loan growth. Despite clarity on taxes, economic policy uncertainty remains elevated as healthcare reform is unresolved and talk of a trade war with China has surfaced.

"We seem to be exposed to a lot more trade policy uncertainty in the last several months, and that's driving a lot of uncertainty in our index and maybe holding firms from making big new investments until the policy becomes clear," said Scott Baker, a finance professor at Northwestern University who co-founded the Economic Policy Uncertainty index. Baker said that the index is still much lower than it was in the immediate aftermath of the Great Recession, when businesses were concerned about the overall trajectory of the broader economy. Some bankers have sounded the alarm that trade policy uncertainty could derail the nascent recovery in loan growth.

"The only thing that's dampened [loan growth optimism] a little bit of late has been some of the trade and tariff conversation that's going on," M&T's King said. "I think there's a little bit of uncertainty now based on those comments."

This article originally appeared on S&P Global Market Intelligence’s website on May 10, 2018, under the title, "Weak loan growth could remain for US banks amid policy uncertainty"