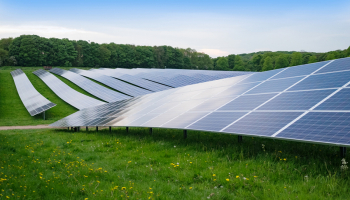 Hitting global net-zero emission targets will require investment of more than $5 trillion into renewable energy assets, according to a report from EY.

The consultancy’s latest update to its Renewable Energy Country Attractiveness Index showed that, despite the impact of the Covid-19 pandemic, more than $303 billion was invested in global renewable energy capacity assets by the end of 2020.

This was a growth of just 2% year on year, however, and EY’s report estimated that $5.2 trillion would be needed to achieve net zero carbon emissions by 2050.

The US is the top investment market for renewable energy, according to EYs index, followed by China. President Biden’s ambitious infrastructure and climate change policies are set to keep the US at the top for some time, the report said.

China and the US have pledged to work together on renewable energy technology – a significant shift in sentiment between the two nations compared to the previous administration.

In the past six months since EY’s last report, India has jumped to third from fourth. The UK and France make up the rest of the top five renewables markets.

Other Asian countries, such as Japan and South Korea, have also made net-zero commitments in recent months.

A study by Fortune Business Insights earlier this month forecast that the global solar power market could grow by 7% a year in the next seven or eight years – but this would still only be worth approximately $300 billion.

EY’s report highlighted the forthcoming United Nations Climate Change Conference of the Parties (COP26) – taking place in Glasgow, Scotland, in November – as “an opportunity to close the gap” between government promises and actions taken so far.

Leading COP26 nations have increased their commitments to “greater accountability and transparency”, EY said, and attendees at November’s conference are expected to detail long-term journey plans to net zero, including investment in renewables.

Arnaud de Giovanni, EY global renewables leader, added that “committed action from COP26 delegates is a must to ensure that the legacy of Paris Agreement is brought to fruition”.

“The leading developed nations must honor existing promises to deliver $100 billion per year in climate financing for developing nations, and all nations must urgently set actionable near-term targets, rather than kicking the can down the road,” de Giovanni said. “There is not much road left.”