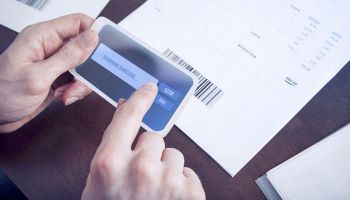 Mobile bill payment use is growing rapidly among U.S. consumers, with 27 million U.S. online households now paying at least one bill from their phone, up nearly 70% over 2013, according to Fiserv research.

While the popularity of mobile payments continues to accelerate, billers would be wise not to neglect other channels and methods, as the survey also showed that consumers not only prize choice, they use an average of three different payment methods each month.

• Give consumers choice with multiple billing and payment methods.

The most popular bills paid via phone include mobile (15 million), cable (14 million), and electricity (8 million). The Fiserv survey found that among smartphone owners, 60% reported that a mobile payment option would improve their satisfaction with the biller.

Tablet is also a growing channel. In 2014, 19 million U.S. online households paid a bill using their tablet device each month, up from 13 million in 2013. The number of tablet owners interested in receiving and paying bills via their device increased to 23 million, up from 18 million in 2013.

Consumers use an average of three bill payment methods each month, and many switch methods from month to month. Forty-three percent of consumers say having multiple billing and payment options improves satisfaction with their biller, regardless of the bill type or the size of biller. Offering multiple billing and payment options, such as enabling e-bill delivery at financial institution sites, can also directly address consumer concerns of keeping monthly bills organized.

Consumers demand expedited and emergency payment options, with 74% saying they expect their billers to offer them. Consumers prefer to make urgent, same-day payments via biller websites (46%), over the phone (41%), via financial institution websites (30%), or through a walk-in payment location (29%). Fifty-seven percent of respondents revealed they would be more satisfied with the biller if or when emergency payment options are made available.

Seeking a life without hassles

Consumers are interested in technology that helps them easily manage their lives and reduce hassles, such as digital bill pay reminders. Bill pay alerts become a digital "parent" providing useful nudges before consumers miss a payment.

The survey found that 66 million online households are interested in setting up bill pay due alerts, which can streamline and simplify their finance routines and prevent late payments. This practice can help break down the barriers to e-bill adoption and help billers increase the likelihood of customers activating the service, as due date alerts are tied to the receipt of an e-bill. Seventy-seven percent of respondents interested in receiving alerts say the functionality would enhance customer satisfaction.

"The takeaway for billers that offer a variety of strategic billing and payment options, along with extras such as emergency payments and alerts, is a happy, more satisfied customer," says Leiserson.

The 2014 survey revealed a surge in non-registered bill payments with 28% of the respondents who paid a bill at a biller site using the guest check out option, compared to 7% in 2013. The top reasons for using a non-registered guest checkout option include the desire to only pay once (46%), registering takes too much time (40%), and not wanting to establish another username and password (34%).