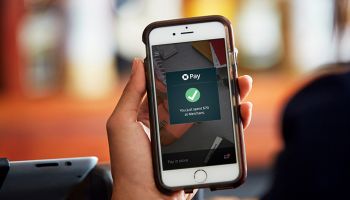 Now entering the mobile wallet payments ring is Chase Pay, an offering to be provided by Chase in partnership with MCX and intended to offer in-store, in-app, and online purchases.

The latest contender will be available in mid-2016 to Chase’s 94 million credit, debit, and prepaid card accounts, the company says. MCX’s client merchants collectively represent more than 100,000 retail locations. Chase customers will be able to use Chase Pay at merchants that currently accept the MCX CurrentC app.

Also, Chase will partner with 17 technology vendors so that merchants that are not Chase Commerce Solutions clients can also participate in Chase Pay.

“Chase Pay solves a number of pain points for consumers and merchants. It will improve the customer experience and drive down the cost of payments,” says Gordon Smith, CEO of Consumer and Community Banking at JPMorgan Chase and company.

Quiet in the payments chatter stream

Initial reaction to Chase’s announcement has been muted.

“Whether or not it succeeds is very much up in the air. Critics of CurrentC argue that it’s designed more for the sake of retailers than actual customers. It lets shops not only dodge transaction fees and use existing scanners, but collect more information about your shopping habits—convenience is more of a side benefit,” says Jon Fingas, writing in the Engadget blog.

Samantha Sharf, Forbes staff writer, says that “it remains to be seen whether users will adopt Chase’s new system, which may not simplify the traditional paying process of taking a credit card out of a wallet and handing it to a cashier. Unlike Apple Pay and Android Pay, Chase Pay will not use near field communications technology … Instead, the user will show a QR code that is generated on their phone to a cashier, who can then scan that code.”

Walmart, for one large merchant, is getting onboard the Chase Pay wagon.

“Featuring Chase Pay within the CurrentC app will give customers greater flexibility, convenience, and value when they pay with their mobile device,” says Mike Cook, senior vice president and assistant treasurer, Walmart Stores Inc. “This gives us an opportunity to simplify payments for Chase’s extensive customer base, deepen loyalty in a way only MCX can, and enhance the customer experience through added services consumers expect from a mobile application.”

But Chris Mills, a blogger at Gizmodo, isn’t buying it. Chase’s announcement versus availability disturb him.

“When can you start using this technology, I hear no one asking?” blogs the skeptical Mills. “That’s the best part: Chase isn’t launching until the middle of 2016, which gives someone at Chase eight months to kill this gigantic waste of time and money.”