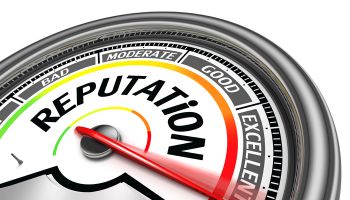 No community bank can control how other institutions’ black eyes make it look. But lenders at the local level can control how their own policies and practices make them look.

In the last few weeks I’ve found myself in conversations with other bankers about the costs of Reputation Risk. Some bankers feel that you can put a number on such costs, while others are adamant that they cannot be quantified.

I do not identify with the school of thought that says that one can measure just about anything. This seems especially true about one’s reputation. Since the start of the Great Recession six years ago, significant damage has been done to the reputations of banks and bankers, but measuring the costs and consequences of such damage seems like an impossible challenge. Yet the damage, for all that, is quite real.

Reputation risk in the energy patch

Many years ago, at the apex of the energy commodity price boom of the early 1980s, I worked for the largest independent energy-related bank in Texas, the First National Bank of Midland. Midland is a relatively small city, located 300 miles equidistant between Dallas and El Paso. It was then and continues  to be today a business community heavily centered in oil and natural gas production activities. It’s also a remarkably sophisticated city by educational achievement and diversity of its people.

Our longtime marketing slogan was: “First National Bank, A Great Bank To Call Your Own.” In time, this was turned against us.

Although local economic activity is an excellent real time indicator of the vitality of a bank’s  business base, the leading indicator in the case of Midland is the wellhead price of oil and gas. Oil prices peaked at $41 a barrel in the summer of 1981 and began a gradual downward drift in the months that followed. There were a series of events in 1982, in particular the failure of Penn Square Bank in Oklahoma City, which caused a drastic collective reevaluation of the outlook for oil-dependent economies throughout the Southwest. By mid-1982, nearly everyone was aware of the risks to businesses and banks of a continuing decline in oil and gas prices. And to a degree, it became self-fulfilling.

One of the bank’s customers—and my close friend—tried to have a conversation with his lending officer on the certain intermediate-term impact of lower prices. He would simply not have contracts to use his drilling rigs for some indeterminate period of time and would be unable to service the remaining debt on his three working rigs. His banker stonewalled the problem and simply refused to deal with it. During those days I personally witnessed a wide range of behaviors, all motivated by a gnawing fear and uncertainty of just how bad the local environment could become.

How to blow customer faith

Our bank sensed the implications for its customers and itself pretty quickly but our options were limited. One thing, though, that we did quickly was to review our credit lines and make clear to customers those situations where we did not consider that we had legally binding commitments to fund under established credit lines.

Simply put, unless there was very clear language—unambiguous language of a commitment, or a commitment fee paid to the bank defining both the parameters and the consideration paid to us of our obligation to fund—we considered the credit facility to be non-binding in terms of incremental availability.

This sounds like legal talk and indeed it was a serious legal question that our lawyers helped us work through very diligently. At the end of this several week process, we felt that we had a firm handle on our binding commitments. It’s worth noting that these in the aggregate were considerably less than what we had previously considered to be our commitments prior to signs that the energy boom was beginning to abate.

As word spread around our tightly knit business community that we were confirming with our customers the extent of what we considered to be our binding obligations to fund, the wags in town began to paraphrase our marketing slogan into things like “A Great Bank To Call Your Loan.”

This was my first up-close experience with what I consider to be reputation risk. It wasn’t our fault that we felt compelled to preserve our liquidity this way. But it was a fact-of-life consequence to many of our customers.

I don’t blame them for having that sort of reaction. Yet I don’t think that we should have done anything relating to defining our commitments specifically any differently.

The bank failed little more than a year later due to sharply lower levels of equity on our balance sheet (though probably not terminally so if given enough time to work through the commodity price cycle) but our customers got nervous. These were the days of FDIC insurance levels of $25,000 per account. So while blue-collar workers’ account balances were protected, there was scant coverage as a percent of wholesale deposits for our large oil and gas drilling and producing customers.

Reputation risk then and now

There are two important points to make about that environment in Midland over 30 years ago and the general situation today.

First relates to the question of what constitutes a binding commitment to lend. I think bankers need to have a very specific understanding of what the answer to that is and it’s not simply a liquidity issue.

This question is also an issue that has raised its head in two expert witness cases I’ve worked on recently. The basic question in each of my cases was whether the bank had in fact created a binding commitment to fund. What was really happening, though, is that collateral values were falling, making the respective transactions marginally profitable or outright uneconomic and everything in between. The customer-plaintiffs were alleging, however, that the banks had reneged on binding commitments.

Morgan’s woes may impact us on the local level in terms of customer perception. And that in turn morphs into a sort of reality relating to our culpability for the degraded reputations that we currently experience as an industry.

Let’s keep our eye on the local ball, the one that we can control. That, simply put, is to do the right job for both our banks and our customers. We need to be clear about what our commitments to fund are and ration them appropriately by circumstance and by fees received in consideration for commitments to fund.

We also need to be sure our relationships support a common understanding of the situation with our customers, reflected in the totality of our behaviors and our documentation. We can create unnecessary reputation risk exposure through inconsistencies as well as short-sightedness.

And a very high percentage of our number want to conduct business to the highest personal and professional standards.

We can only do this comprehensively by thinking through the possible sources and causes of reputation risk. Because they are hard to quantify—and perhaps impossibly so in most cases—we are not excused from performing the discipline and drill of asking the risk-based questions of “why” and “why not” and “what next” as we go about our daily routines.

More in this category: « Risks over the horizon, and how to prepare If your glass is only half full—or half empty—pour more water »
back to top