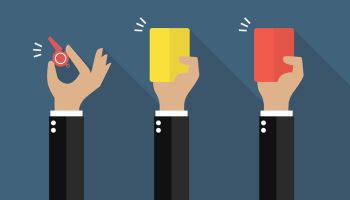 Banks will be happiest if they police themselves, rather than letting regulators be first to spot misconduct problems.

Long ago, one of the chief duties of a bank board of directors was rather a burning issue. Once a year, back in the days when many banks issued their own banknotes, a board was legally required to gather, and supervise the incineration of—often in a potbelly stove in the bank—the notes that were too old and worn to keep in circulation.

Simpler times. Today the burning issues facing boards run the gamut, but a significant one is employee misconduct. It affects banks mega, large, and small, and when something hits the headlines, the banks involved suffer reputation damage, and all banks pick up a little bit of the taint. Even now, the industry still is tarred by the brush of misconduct leading up to the financial crisis.

The New York Federal Reserve Bank, in studies and officials’ speeches, has been examining and opining on employee misconduct for over a year. Most recently Kevin Stiroh, executive vice-president in charge of supervision, spoke on the issue.

Central to his discussion of misconduct risk is a concept Stiroh calls “cultural capital.”

“Cultural capital is not loss absorbing like equity capital,” said Stiroh, “but it can be loss preventing by influencing decisions, behaviors, and outcomes over time.”

Here’s how Stiroh explains it.

“Cultural capital is an intangible asset,” he explained. “That is, we generally experience the impact rather than the thing itself—but its impact can be measured, assessed, and ultimately influenced. For example, in an organization with a high level of cultural capital, misconduct risk is low and observed structures, processes, formal incentives, and desired business outcomes are consistent with the firm’s stated values.”

Going back to boards, for some time now they have been charged with setting the “tone from the top.” Their spoken and unspoken dictation of what is acceptable and what isn’t ripple throughout the bank. Top management is also part of this process and some writers speak also of “tone from the middle,” where the layer of management between the top and the rank and file determines what happens on the job.

To Stiroh, cultural capital represents an input to a bank’s process as much as any other key input, because it affects how the bank does business.

Some say that misconduct risk arises from a few “bad apples.” Others blame misconduct on “bad processes.” Stiroh doesn’t think either idea tells the whole tale.

“Root cause analyses of many recent cases of misconduct in the financial sector suggest that misconduct is not just the product of a few individuals or bad processes, but rather the result of wider organizational breakdowns, enabled by the firm’s culture,” Stiroh said.

The marks of an organization with strong cultural capital, he said, include unspoken patterns of behavior that favor good outcomes. For example, where employees feel free to raise ethical concerns, and believe that management will respond, that strengthens the bank.

But this means going beyond talking a good game and good intentions.

Stiroh said that banks with low levels of cultural capital talk a good game, but expressions of good intent “do not reflect ‘the way things are really done’.”

• Senior leaders’ own behavior and the actions of subordinates doesn’t reflect the bank’s stated values.

• Real-world norms and pressures cause employees to make decisions out of synch with those official values.

• Board members and senior managers don’t find out about misconduct until authorities spot it.

In sum, said Stiroh, “Rules may be followed to the letter, but not in spirit. All of this increases misconduct risk and potentially damages the firm and the industry over time.”

Why does misconduct persist?

In recent cases of misconduct, heads have rolled and long-held reputations have eroded, or tanked. Why, asked Stiroh rhetorically, don’t some organizations invest more heavily in cultural capital?

He blamed this lack of “investment” three factors:

1. Principal-agent problems. Do employees have incentives to act in ways that don’t line up with the interests of management and shareholders? If so, said Stiroh, “this can lead to excessive risk-taking, underinvestment in risk-reduction and risk-control mechanisms, and a focus on short-tem returns at the cost of long-run viability.”

Stiroh added: “Think about the trader who is compensated on short-term P&L and not long-term value creation.”

2. Adverse selection. This occurs when “those particularly ill-suited for something are the most likely to participate,” said Stiroh.

Events reflecting misconduct can change a bank’s workforce over time—word gets around, and the mix of people changes.

“Firms with relatively low cultural capital (and a relatively high tolerance of misconduct risk) may attract and retain employees and clients more inclined to take inappropriate risks and push beyond internal limits and controls,” said Stiroh.

High-quality directors, officers, and staff might elect to leave such a bank—or decline to join it, Stiroh said. The effect? “Depleting the firm’s human capital and contributing to the deterioration of cultural capital,” he said.

3. External factors. Plainly put, this is the potential for employee misconduct at one institution to impact major portions of the financial services industry. Bad conduct can erode public confidence and may result in inflexible regulation for all players, according to a N.Y. Fed paper that the speech was based on.

What’s the role of the regulator?

The cost of misconduct can come home in many places. Stiroh said this can affect the overall flow of productive financial services, affecting consumers, businesses, and other banks.

Simply putting more rules in place won’t fix such situations, he said. Often, this is because the problems aren’t contained by rules. “They involve attitudes, norms, and behaviors,” said Stiroh.

Both the industry and its regulators must focus more on how decisions are made, and what practices and behaviors are at the core of good governance.

Stiroh said this all adds up to a role for supervisors: “to encourage resiliency, including investment in cultural capital, beyond what the firm would choose to do on its own.”

“That is,” he continued, “if firms don’t have sufficient incentives to overcome these forces, then the official sector should push toward a better outcome.”

More in this category: « Will credit risk take banking into crunch again? Banks against the yield curve »
back to top