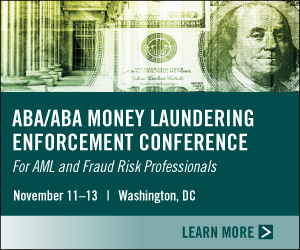 The lyrics to the Alicia Keys or the Chicago song (you can guess which one I know) are not relevant to my theme today--but the title certainly is. (Note: I've used this title before but acknowledged a Pink Floyd song--what can I say, song lyrics and titles were better years ago than now.)

In November, American voters will decide on leadership for the next four years. It is during election years that I recall how bipartisan the issue of money laundering prevention was in the past. While it is true that it seemed that every two years in the late 80s and 90s, Congress tried (and many times succeeded) to pass so-called "anti-drug" bills, it was also true that the banking industry had a seat at the table to offer recommendations on what provisions would be useful in detecting, deterring, and reporting activity that could be an indicator of moving illicit funds.

Even with the passage of the USA PATRIOT Act, the industry was able to offer input. While some provisions (i.e 314) were never implemented as proposed, it is undeniable that there was open dialogue between representatives of lawmakers and those that would face compliance changes.

The times, they are a changin'

I have been away from legislative advocacy for a number of years. But my colleagues tell me that open and honest dialogue no longer exists. Whether that is true or not, I cannot say. What I can say is that with a new or revamped Administration, opportunity exists for those that want to engage.

What will be the issues going forward?

Clearly, the administration of President Obama has skillfully used sanctions as an effective national security tool. If Governor Romney wins, it seems plausible that sanctions will still be a robust mechanism to address rogue nations. Beyond that, what will be the issues of concern that impact AML professionals?

I would venture an educated guess that cybersecurity and many elements of financial crime (e.g mortgage fraud, identity theft, insider abuse, et al) will be addressed, no matter who is in the White House. Also, there is no evidence that current agency officials will leave, even if President Obama wins re-election--but it is always a possibility.

As you may know, my preference has always been that government leaders in the AML/CFT/financial crime space support public-private cooperation so that goal is paramount to the broad AML community. So, when the election is over, AML professionals should tap their trade groups to get in to visit the next Administration as soon as possible.

Note: I am fully aware that we face economic and national security challenges outside of the AML field. But that doesn't mean you sit on the sidelines.

Where do we go from here? It is up to us.

Get busy and push your trade groups.

It is important to recognize actions by the government that helps both the private and public sectors. The Financial Crimes Enforcement Network (FinCEN) has, for some time, provided guidance and reports to assist compliance professionals and examiners in addressing complicated products, issues, or other challenges.

You can certainly review the guidance and don't need me to summarize it. But understand that these risks include impacts on distressed financial institutions and the elderly. It is essential that you understand the red flags as outlined by FinCEN.

Neglecting new products and delivery channels harms institutions and a large portion of society. Thanks to FinCEN for continuing to focus on a myriad of AML challenges.

Gillum presented at several ABA/ABA Money Laundering Enforcement Conferences and also served as an original advisory board member of ACAMS. Al created the AML program at the U.S. Postal Service, lectured on AML and Bank Secrecy Act issues for many years, and led the effort at ACAMS to create our first certified anti-money laundering (CAMS) examination.

Al's kindness, professionalism, and commitment to the AML community will never be forgotten. He was a true inspiration to all of us.

Al dedicated his professional life to the compliance field. Al's influence, smile, and warm personality will be greatly missed.

As Al would say, "Thanks pal."

More in this category: « 'No Plan B*' Stand*: and get active on AML changes »
back to top