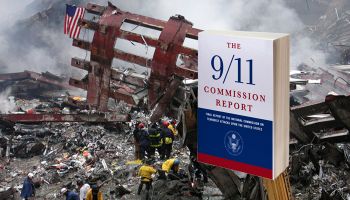 Here comes another of my crabby old man “Get off my lawn!” rants.

My children hear this stuff from me all the time—though it’s usually on pitch counts in baseball, lack of free-throw shooting prowess, and slapping hands for missed free throws.

But for you, it’s about AML issues, not sports.

It is amazing to me how limited our attention span has become.

The anniversary report makes key points. What media outlets reported on it?

How is this possible?

With terrorism still a major threat and society clamoring for safety, the lack of attention is appalling.

“Reflections of Our Lives”*

A quick reminder that the co-chairs, Lee Hamilton and Tom Kean, were well known for working across the political aisle (as foreign today as the use of a fax machine) and the remaining members of the Commission have similar reputations. The report is a combination of the Commission members’ views in response to interviewing many current and veteran members of counter-terrorism in the United States. The main points made include:

• Terrorism is far from over. In fact, it’s in a new and dangerous phase.

• Cyber-readiness lags far behind the threat.

• Counterterrorism fatigue and a waning sense of urgency among the public threaten U.S. security, sadly.

To break down several of these conclusions, the Commission does provide some positive feedback that “core Al Qaeda has been hurt badly” through the tremendous efforts of law enforcement, the military and intelligence agencies.

However, the affiliates and subgroups have dispersed and are in more theaters of operation (at least 16 in September 2013) than 10 years ago.

The report concludes that section with, “The terrorist threat is evolving, not defeated.” (You can find a two-page summary of the report here.)

Cyber readiness is not

It will not surprise experts, such as my former colleague Doug Johnson of ABA, that a major concern of those interviewed by the Commission is “intensifying attacks on the country’s information system, in both the private and public sectors.”

Cyber attacks are coming from terrorist groups and state actors from China, Russia, and Iran. The expectations are that terrorists will acquire malicious software from hackers (the group with absolutely no moral compass) that will make “a dangerous cyber realm even moreso.”

With all of this facing us and much of the vulnerability in the private sector, partnership with the public sector is a must!

The authors also make clear their view that cyber is the battlefield of the future but bemoan Congress’ inability to pass relevant legislation and conclude we have a “September 10th mentality” as regards cyber readiness.

Another almost “laughable” fact—believe me, it is not funny—is that the Commission strongly urged intelligent oversight of the Department of Homeland Security in 2004 when there was 88 congressional committees or subcommittees overseeing DHS.

It is no surprise that Congress has an approval rating lower than, according to one Congressman, head lice.

Data and information sharing: Can’t we be a team?

Any of us engaged in post 9/11 reviews of financial transaction tracking were severely disappointed at the lack of teamwork by law enforcement and intelligence agencies. All publicly agreed that these silos had to be torn down.

According to the Commission, there has been progress. But reluctance to share still seems to exist. And there are some gaps with state and local law enforcement as well.  Sharing with the private sector also needs vast improvement.

Is working together a pipe dream?

The last section of the report is particularly compelling—a push for unity of purpose.

With an understatement, “political acrimony appears the norm and compromise is the rare exception,” the Commission calls on the goal being the focus and ends with the point that terrorism is not going away and working together is the only way to succeed.

* Marmalade, a one-hit wonder with “Reflections of My Life” from 1969 with the line, “The world is a bad place.”