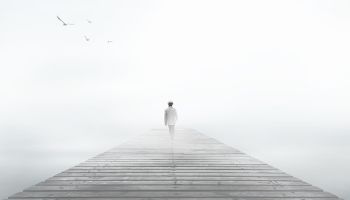 Can you disappear? Not very likely.

Do you know how many devices are actually monitoring you?

Remember George Orwell’s “Big Brother”? In the novel 1984, Big Brother monitored your every move. It used to be a dystopian paranoia. But the context in the book has active meaning now.

It was implied, in the imagination of the novel’s reader, that you are being watched all of the time by somebody. The novel—published in 1949—was an alarming indictment of the future and how society would evolve into comprehensively violating our privacy 365 X 7 X 24!

(You are actually likely paying to be monitored, if you think of some of your recent electronic purchases. And that includes devices made by a company that once advertised that its then-new computers would make sure that 1984 would not be like 1984.)

Maybe not so much today, but the question remains. Can you at least disappear? That is not seen—you can’t vanish by design!

You could disappear—maybe—in the 60s and 70s. But when cars began to have computer systems, cell phones became popular, and computers began keeping track of all transactions, it became harder.

But let’s not stop there. Global Positioning Systems can track your location even though your devices are not “turned on.”

How? “Find my phone/device” and other apps are tracking your location.

Lost? Ask Big Brother where you are

Roadside rest stops and interstate highways have video, high-speech toll tracking transponders, point of sale terminals, concert and sporting venues, food courts and yes, even your laptop and your hot spot can reveal your location.

Even your watch or other “fit” device with an exercise program can reveal your location.

In 1984 it was real time; in today’s context, monitoring is after the fact. If “they” want to find you, you will be found. Be it buying gas or driving down the interstate, just going through our daily lives will make us “findable.” So, big deal!

The point to be made is that technology, even without our knowledge or awareness, has moved into almost every aspect of our daily lives.

With all of this, I hate to tell you, that banking technology is still behind!

More in this category: « Puhleeze stop thinking like it’s the 50s! Are you totally stuck? »
back to top