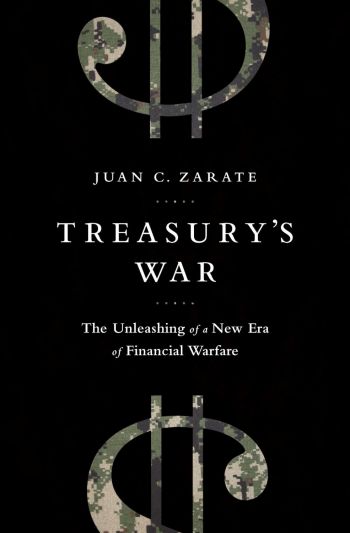 Treasury's War: The Unleashing Of A New Era Of Financial Warfare. By Juan Zarate. PublicAffairs. 512 pp.

On the timeline of financial services evolution, the anti-money laundering discipline does not have a long history. It began in earnest around 1985, and evolved in more recent years beyond an anti-crime, anti-drug orientation to include, as well, an anti-terrorist financing element. The benefit of that short history, to those of us in the profession for all or much of that time, is that we know the leaders and may have even participated in some of the issues, in some fashion, that form the basis of today’s AML policy.

As one of those fortunate to have been in the field from the beginning, I was very excited to learn of a book by Juan Zarate, a former Treasury official with whom I had the honor of working post 9/11. Zarate’s review of the events and debates following that critical time in Treasury’s war does not disappoint. I consider it a must-read for anyone who wants to know where we are, where we’ve been, and what challenges lie ahead.

How 9/11 changed the challenge

Early on, Zarate captures the interest of any student of AML with his first-person account of how the terrorist attacks of 9/11 set the course of the U.S. and global response for the next decade. Of course, some of us would have welcomed an overview of money laundering prevention pre 9/11. But, understandably, Zarate’s focus is how that day changed policy forever and he offers a brief mention of the use of sanctions and laws from the previous century.

Zarate’s account also addresses the well-known interagency conflicts with Treasury and the FBI right after 9/11 as he describes two parallel task forces, headed by each, that “would clash repeatedly as law enforcement focused on terrorist financing investigations.”  While some of us would have relished a behind-the-scenes accounts of infighting, Juan handles the issue like the professional he is, avoiding gossip, and concentrating instead on the bigger story—use of new tools to attack financial flows.

Another part of the account which should resonate with anyone paying attention to the budget sequester, and other attempts to redirect crucial resources, is the coverage of the creation of the Department of Homeland Security (DHS). Here Zarate does take you on the inside to see how Treasury went from leading the U.S. efforts to combat terrorist financing (with FBI of course) to its battle to salvage a seat at the financial investigations/intelligence table with Zarate’s proposed (and finally created) “Executive Office of Terrorist Financing and Financial Crimes.”

One senses a sincerity from Zarate to, not save turf, but to utilize a group of dedicated public servants to an important way to combat the illicit flows of funds. Zarate then covers how the office had to quickly show relevance and resurrect Treasury as a key player in AML and counter-terrorist financing. Even though you know the outcome, you find yourself rooting for their eventual success.

Readers less familiar with the BSA/AML world will learn what long-timers know, and will see confirmed in the book’s pages: This enforcement and compliance discipline represents a continual curve of learning and adjustment.

For instance, Zarate takes the reader through what he calls, “The Mother of All Financial Investigations,” when the Treasury Department went after Saddam Hussein’s assets to return them to the Iraqi people. This chapter, appearing in the middle of the book, makes a strong case regarding how finding these assets helped “shape the way we [Treasury] waged financial warfare beyond the borders of Iraq.”

If you are an AML professional, you will appreciate Zarate’s points in this section that Saddam and his minions used proxies, front companies, and a variety of bank accounts to move assets despite the existence of sanctions. In other words, the garden-variety techniques used by crooks everywhere.

Also, as we follow current events regarding Syria, Zarate mentions that ten years ago, the U.S. suspected but could not prove that the Syrians used billions of dollars to pay Saddam’s generals and to tap other methods to evade sanctions.

Zarate’s “Bad Banks” section describes the change in attitude among financial services leaders in late 2001 that resulted in a commitment of support and a spirit of cooperation.  He covers the case of Riggs Bank—which was absorbed long ago, now, and which to me is the poster child of reputational risk—and other well-known facilitators of criminal monies. He also explains how the newly enacted USA PATRIOT Act and its Section 311 became a tremendous tool for pressuring policy change in jurisdictions allowing rogue bank activity.

Treasury’s War delves into the important role that Treasury played with the instrumental Financial Action Task  Force (FATF). His account of how Treasury officials and others they worked with were able to convince Russia and China to make changes so as to be accepted into FATF is both dramatic and a great example of the importance of countries being accepted into the AML community.

Now, I would not go as far as to suggest those and other countries, previously blacklisted, are on a par with U.S. in terms of laws and regulations. But the changes are positive and serve a greater purpose.

Juan Zarate left the Treasury for the White House in 2005 but not before assisting in the creation of the Office of Terrorism and Financial Intelligence, which he calls “a permanent address in the U.S. government for the execution of all-out financial welfare.”

The second half of “Treasury’s War” reflects on the challenges with North Korea, Iran and the response to the Swift “scandal” uncovered by the media. Here Zarate shares accounts that show both the dedication of the Treasury staff and the pure emotions of being in constant engagement with foreign governments and within the U.S. government. A scene where a Treasury official breaks down is poignant, as is Zarate’s strong defense on having access to (but not control of) Swift data as a law enforcement tool.

In his final chapter Zarate makes recommendations to strategic and tactical guidance on how to manage the response to future financial war. While not an economist, he makes the point that China and Russia represent challenges to U.S. prominence and that fact may impact use of sanctions or other attempts to stem the flow of illicit funds. He adds his voice to those warning AML professionals about new currencies and technologies and the fear of less transparency.

Sanctions and the threat from the shadows

Zarate ends by acknowledging the successful use of “financial or forced isolation” in the past can quickly turn as financial institutions stop doing business with certain bad actors and the possibility that “less credible or scrupulous financial actors will step in to fill the vacuum.”

Treasury’s War  offers some brief recommendations to address this challenge but it seems to me that much more needs to be discussed and debated.

I have to note that Zarate makes a point I have been touting for years—“meetings with bank CEOs and compliance officers often became more important than meeting with government officials.”

As a long-time member of the AML community, reading about friends and peers in the book gave Zarate’s account particular additional appeal to me. If you are new to this field, the coverage of those veterans will still hold your interest as the author gives them the accolades they deserve and the proper back-story so you understand their involvement.

Of course, many others within the government and the private sector have played a huge role in the collaboration and cooperation that continues today. But that is a minor point—that book can still be written.

In sum, though Juan Zarate doesn’t add to the history surrounding counterterrorist financing post 9/11, he is the first to clearly explain it. Treasury’s War is detailed, interesting, and sincere—the AML community especially will appreciate and learn from this story.

More in this category: When wrong end round is right »
back to top